I have been having a bit of a bug while testing on iOS 6 with my current iOS 5 app.

We have experienced a lock up on a method return for an innocuous method that internally used blocks, but not as properties. The issue is that calling the method works, so does every line of code within the method (including the block utilizing code)

I tried using [block copy] before calling the block, but there was absolutely no change.

turns out the function definition of my code was declared in an internal interface and did not have a return type.

Here are some graphics to illustrate this issue. 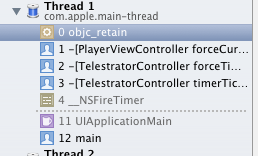 The Function Implementation (this is what is called, and returned)

The Definition in the Private Interface

I decided to look at the function call, and noticed it returning (id) rather than void

And Finally the only code change that alleviated this bug.

I was forced to download iOS 6 and Xcode 4.5 for testing this out.

I did indeed crash every time the app was run.

After hunting down this bug on stack overflow among other sites linked to by Google, I tried the block issue that some others are experiencing. And did a copy wherever I could to try to alleviate the issue of retained object falling off the stack.

I was not using block properties so I just called copy on the blocks themselves.

This did not help.

Finally with another developer going over it with me. I was stepping back and looking at it from another angle, and decided to try to determine what the heck was being retained.

It turned out the result of the function was being retained. And the only way I figured that out was to look at the value that auto complete showed me as the return type.

I hope this helps others that have this issue as I spent about 2 hours hunting it down and it turned out to be a semantic issue between a result type that should never have existed.

Not the answer you're looking for? Browse other questions tagged ios exc-bad-access or ask your own question.

294
EXC_BAD_ACCESS signal received
151
Event handling for iOS - how hitTest:withEvent: and pointInside:withEvent: are related?
209
How do I get a background location update every n minutes in my iOS application?
153
Why would you use an ivar?
3
Running a simple action on the childnode of an SKScene causes EXC_BAD_ACCESS in iOS 7.1
0
EXC_BAD_ACCESS (c++) at random places
1
'defer' block within NSURLSession callback not executing
1
Crash when accessing nested completion block — EXC_BAD_ACCESS
1
Understanding x86-64 assembly code in Xcode