Could not load type from assembly error

I have written the following simple test in trying to learn Castle Windsor's Fluent Interface:

When I execute the test through TestDriven.NET I get the following error:

When I execute the test through the NUnit GUI I get:

If I open the Assembly that I am referencing in Reflector I can see its information is:

and that it definitely contains Castle.MicroKernel.Registration.IRegistration

What could be going on?

I should mention that the binaries are taken from the latest build of Castle though I have never worked with nant so I didn't bother re-compiling from source and just took the files in the bin directory. I should also point out that my project compiles with no problem.

The solution to this for me was not mentioned above, so I thought I would add my answer to the long tail...

I ended up having an old reference to a class (an HttpHandler) in web.config that was no longer being used (and was no longer a valid reference). For some reason it was ignored while running in Studio (or maybe I have that class still accessible within my dev setup?) and so I only got this error once I tried deploying to IIS. I searched on the assembly name in web.config, removed the unused handler reference, then this error went away and everything works great. Hope this helps someone else.

I had the same issue and for me it had nothing to do with namespace or project naming.

But as several users hinted at it had to do with an old assembly still being referenced.

I recommend to delete all "bin"/binary folders of all projects and to re-build the whole solution. This washed out any potentially outdated assemblies and after that MEF exported all my plugins without issue.

I was getting this error and nothing I found on StackOverflow or elsewhere solved it, but bmoeskau's answer to this question pointed me in the right direction for the fix, which hasn't been mentioned yet as an answer. My answer isn't strictly related to the original question, but I'm posting it here under the assumption that someone having this problem will find there way here through searching Google or something similar (like myself one month from now when this bites me again, arg!).

My assembly is in the GAC, so there is theoretically only one version of the assembly available. Except IIS is helpfully caching the old version and giving me this error. I had just changed, rebuilt and reinstalled the assembly in the GAC. One possible solution is to use Task Manager to kill w3wp.exe. This forces IIS to reread the assembly from the GAC: problem solved.

I had this issue after factoring a class name:
Could not load type 'Namspace.OldClassName' from assembly 'Assembly name...'.

Stopping IIS and deleting the contents in Temporary ASP.NET Files fixed it up for me.

If this error caused by changing the namespace, make sur that the folder of that project is renamed to the same name, and close VS.NET Edit the project which has the problem with Notepad and replace there nodes

Version=1.0.3.0 indicates Castle RC3, however the fluent interface was developed some months after the release of RC3. Therefore, it looks like you have a versioning problem. Maybe you have Castle RC3 registered in the GAC and it's using that one...

Deleting my .pdb file for the dll solved this issue for me. I'm guessing it has something to do with the fact that the dll was created using ILMerge.

When I run into such problem, I find FUSLOGVW tool very helpful. It is checking assembly binding information and logs it for you. Sometimes the libraries are missing, sometimes GAC has different versions that are being loaded. Sometimes the platform of referenced libraries is causing the problems. This tool makes it clear how the dependencies' bindings are being resolved and this may really help you to investigate/debug your problem.

Maybe not as likely, but for me it was caused by my application trying to load a library with the same assembly name (xxx.exe loading xxx.dll).

Just run into this with another cause:

Yet another solution: Old DLLs pointing to each other and cached by Visual Studio in

Exit VS, delete everything in this folder and Bob's your uncle.

I had the same issue. I just resolved this by updating the assembly via GAC.

I used these commands to uninstall and Reinstall respectively.

Note: i have not uninstall my dll in my case i have just updated dll with current path.

I ran into this scenario when trying to load a type (via reflection) in an assembly that was built against a different version of a reference common to the application where this error popped up.

As I'm sure the type is unchanged in both versions of the assembly I ended up creating a custom assembly resolver that maps the missing assembly to the one my application has already loaded. Simplest way is to add a static constructor to the program class like so:

This of course assumes that the Assembly is located in the startup path of the application and can easily be adapted.

Just run into this with another cause:

I was using a merged assembly created with ILRepack. The assembly you are querying the types from must be the first one passed to ILRepack or its types will not be available.

You might be able to resolve this with binding redirects in *.config. http://blogs.msdn.com/b/dougste/archive/2006/09/05/741329.aspx has a good discussion around using older .net components in newer frameworks. http://msdn.microsoft.com/en-us/library/eftw1fys(vs.71).aspx

I got the same error after updating a referenced dll in a desktop executable project. The issue was as people here mentioned related an old reference and simple to fix but hasn’t been mentioned here, so I thought it might save other people’s time.

Anyway I updated dll A and got the error from another referenced dll let’s call it B here where dll A has a reference to dll B.

Updating dll B fixed the issue.

You can see added assembly C:\Windows\system32\

I experienced a similar issue in Visual Studio 2017 using MSTest as the testing framework. I was receiving System.TypeLoadException exceptions when running some (not all) unit tests, but those unit tests would pass when debugged. I ultimately did the following which solved the problem:

After taking these steps all unit tests started passing when run.

I experienced the same as above after removing signing of assemblies in the solution. The projects would not build.

I found that one of the projects referenced the StrongNamer NuGet package, which modifies the build process and tries to sign non-signed Nuget packages.

After removing the StrongNamer package I was able to build the project again without signing/strong-naming the assemblies.

If this is a Windows app, try checking for a duplicate in the Global Assembly Cache (GAC). Something is overriding your bin / debug version.

If this is a web app, you may need to delete on server and re-upload. If you are publishing you may want to check the Delete all existing files prior to publish check box. Depending on Visual Studio version it should be located in Publish > Settings > File Publish Options 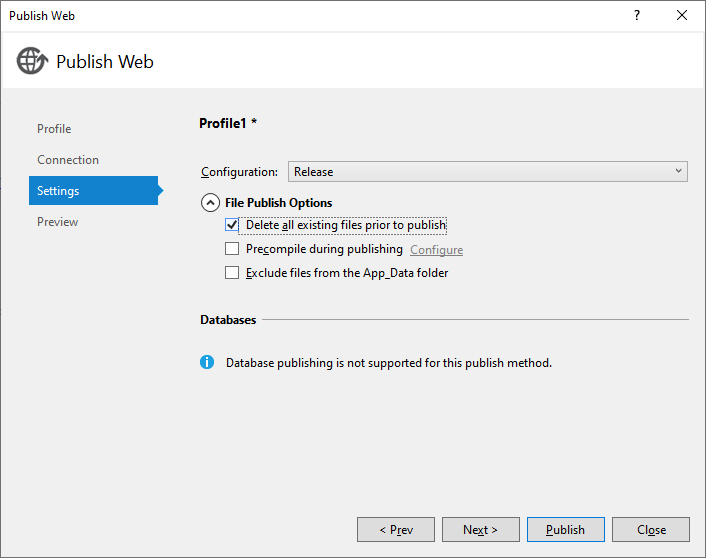 I want to mention additional things and make a conclusion.

Commonly, As Otherones explained, This exception will raise when there is a problem with loading expected type (in an existing assembly) in runtime. More specific, Whenever there is loaded assembly that is stale (and not contains the requiring type). Or when an assembly with different version or build is already loaded that not contains the expected type.

Also, I must mention that It seems Rarely, But It is possible to be runtime limitation or a compiler bug (suppose compiler not negated about something and just compiled problematic code), But runtime throws System.TypeLoadException exception. Yes; this actually occurred for me!

An Example (witch occurred for me)

Consider an struct that defines a nullable field of its own type inside itself. Defining such the filed non-nullable, will take you a compile-time error and prevents you from build (Obviously This behavior has a logical reason). But what about nullable struct filed? Actually, nullable value-types is Nullable<T> at behind. As c# compiler not prevented me from defining in this way, I tried it and the project built. But I get runtime exception System.TypeLoadException: 'Could not load type 'SomeInfo' from assembly ... ', And It seems to be Problem in loading the part of my code (otherwise, we may say: the compiler not-truly performed compilation process at least) for me in my environment:

(I checked and ensured that the compiled assembly is up to date And actually is newly compiled. Even, I throwed away all bin directory and refreshed the whole project. Even I created a new project in a fresh solution and tested, But such the struct generates the exception.)

It seems to be a runtime limitation (logically or technically) or bug or a same problem else, because Visual Studio not prevents me from compile And Also other newer parts of my codes (excluding this struct) are executing fine. Changing the struct to a class, the compiled assembly contains and executes the type as well.

I have no any idea to explain in-detail why this behavior occurs in my environment, But I faced this situation.

Usually the dll is not found, or the dll exists, but the new class cannot be found.

If not, rebuild the dll and upload it again.

I tried most of the above, but none of them worked for me.

Here was my issue.

I moved a c# project from my local machine (Windows 10) to the server (Windows Server 2008 R2). I started getting the 'could not load assembly' error when trying to run tests from my UnitTest project.

Here is my solution.

I just resolved this by running the iisreset command using the command prompt... Always the first thing I do when I get such errors.

Not the answer you're looking for? Browse other questions tagged .net or ask your own question.