I am looking for an algorithm that determines percentiles for live data capture.

For example, consider the development of a server application.

The naive algorithm is to insert each response time into a list. When statistics are requested, sort the list and get the values at the proper positions.

Memory usages scales linearly with the number of requests.

Is there an algorithm that yields "approximate" percentile statistics given limited memory usage? For example, let's say I want to solve this problem in a way that I process millions of requests but only want to use say one kilobyte of memory for percentile tracking (discarding the tracking for old requests is not an option since the percentiles are supposed to be for all requests).

Also require that there is no a priori knowledge of the distribution. For example, I do not want to specify any ranges of buckets ahead of time.

If you want to keep the memory usage constant as you get more and more data, then you're going to have to resample that data somehow. That implies that you must apply some sort of rebinning scheme. You can wait until you acquire a certain amount of raw inputs before beginning the rebinning, but you cannot avoid it entirely.

So your question is really asking "what's the best way of dynamically binning my data"? There are lots of approaches, but if you want to minimise your assumptions about the range or distribution of values you may receive, then a simple approach is to average over buckets of fixed size k, with logarithmically distributed widths. For example, lets say you want to hold 1000 values in memory at any one time. Pick a size for k, say 100. Pick your minimum resolution, say 1ms. Then

This type of log-scaled approach is similar to the chunking systems used in hash table algorithms, used by some filesystems and memory allocation algorithms. It works well when your data has a large dynamic range.

As new values come in, you can choose how you want to resample, depending on your requirements. For example, you could track a moving average, use a first-in-first-out, or some other more sophisticated method. See the Kademlia algorithm for one approach (used by Bittorrent).

Ultimately, rebinning must lose you some information. Your choices regarding the binning will determine the specifics of what information is lost. Another way of saying this is that the constant size memory store implies a trade-off between dynamic range and the sampling fidelity; how you make that trade-off is up to you, but like any sampling problem, there's no getting around this basic fact.

If you're really interested in the pros and cons, then no answer on this forum can hope to be sufficient. You should look into sampling theory. There's a huge amount of research on this topic available.

For what it's worth, I suspect that your server times will have a relatively small dynamic range, so a more relaxed scaling to allow higher sampling of common values may provide more accurate results.

Edit: To answer your comment, here's an example of a simple binning algorithm.

If you don't like throwing away old values, then you can implement some alternative scheme to use instead. For example, when a bin becomes full (reaches 100 values, in my example), you could take the average of the oldest 50 elements (i.e. the first 50 in the list), discard those elements, and then append the new average element to the bin, leaving you with a bin of 51 elements that now has space to hold 49 new values. This is a simple example of rebinning.

Another example of rebinning is downsampling; throwing away every 5th value in a sorted list, for example.

I hope this concrete example helps. The key point to take away is that there are lots of ways of achieving a constant memory aging algorithm; only you can decide what is satisfactory given your requirements.

I've once published a blog post on this topic. The blog is now defunct but the article is included in full below.

The basic idea is to reduce the requirement for an exact calculation in favor of "95% percent of responses take 500ms-600ms or less" (for all exact percentiles of 500ms-600ms).

As we’ve recently started feeling that response times of one of our webapps got worse, we decided to spend some time tweaking the apps’ performance. As a first step, we wanted to get a thorough understanding of current response times. For performance evaluations, using minimum, maximum or average response times is a bad idea: “The ‘average’ is the evil of performance optimization and often as helpful as ‘average patient temperature in the hospital'” (MySQL Performance Blog). Instead, performance tuners should be looking at the percentile: “A percentile is the value of a variable below which a certain percent of observations fall” (Wikipedia). In other words: the 95th percentile is the time in which 95% of requests finished. Therefore, a performance goals related to the percentile could be similar to “The 95th percentile should be lower than 800 ms”. Setting such performance goals is one thing, but efficiently tracking them for a live system is another one.

I’ve spent quite some time looking for existing implementations of percentile calculations (e.g. here or here). All of them required storing response times for each and every request and calculate the percentile on demand or adding new response times in order. This was not what I wanted. I was hoping for a solution that would allow memory and CPU efficient live statistics for hundreds of thousands of requests. Storing response times for hundreds of thousands of requests and calculating the percentile on demand does neither sound CPU nor memory efficient.

Such a solution as I was hoping for simply seems not to exist. On second thought, I came up with another idea: For the type of performance evaluation I was looking for, it’s not necessary to get the exact percentile. An approximate answer like “the 95th percentile is between 850ms and 900ms” would totally suffice. Lowering the requirements this way makes an implementation extremely easy, especially if upper and lower borders for the possible results are known. For example, I’m not interested in response times higher than several seconds – they are extremely bad anyway, regardless of being 10 seconds or 15 seconds.

So here is the idea behind the implementation:

It’s that simple. And here is the code.

This approach only requires two int values (= 8 byte) per bucket, allowing to track 128 buckets with 1K of memory. More than sufficient for analysing response times of a web application using a granularity of 50ms). Additionally, for the sake of performance, I’ve intentionally implemented this without any synchronization(e.g. using AtomicIntegers), knowing that some increments might get lost.

By the way, using Google Charts and 60 percentile counters, I was able to create a nice graph out of one hour of collected response times: 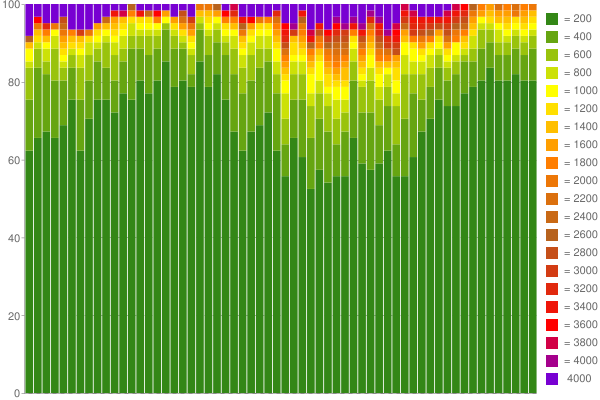 (It's been quite some time since this question was asked, but I'd like to point out a few related research papers)

There has been a significant amount of research on approximate percentiles of data streams in the past few years. A few interesting papers with full algorithm definitions:

All of these papers propose algorithms with sub-linear space complexity for the computation of approximate percentiles over a data stream.

I believe there are many good approximate algorithms for this problem. A good first-cut approach is to simply use a fixed-size array (say 1K worth of data). Fix some probability p. For each request, with probability p, write its response time into the array (replacing the oldest time in there). Since the array is a subsampling of the live stream and since subsampling preserves the distribution, doing the statistics on that array will give you an approximation of the statistics of the full, live stream.

This approach has several advantages: it requires no a-priori information, and it's easy to code. You can build it quickly and experimentally determine, for your particular server, at what point growing the buffer has only a negligible effect on the answer. That is the point where the approximation is sufficiently precise.

If you find that you need too much memory to give you statistics that are precise enough, then you'll have to dig further. Good keywords are: "stream computing", "stream statistics", and of course "percentiles". You can also try "ire and curses"'s approach.

Use a dynamic array T[] of large integers or something where T[n] counts the numer of times the response time was n milliseconds. If you really are doing statistics on a server application then possibly 250 ms response times are your absolute limit anyway. So your 1 KB holds one 32 bits integer for every ms between 0 and 250, and you have some room to spare for an overflow bin. If you want something with more bins, go with 8 bit numbers for 1000 bins, and the moment a counter would overflow (i.e. 256th request at that response time) you shift the bits in all bins down by 1. (effectively halving the value in all bins). This means you disregard all bins that capture less than 1/127th of the delays that the most visited bin catches.

If you really, really need a set of specific bins I'd suggest using the first day of requests to come up with a reasonable fixed set of bins. Anything dynamic would be quite dangerous in a live, performance sensitive application. If you choose that path you'd better know what your doing, or one day you're going to get called out of bed to explain why your statistics tracker is suddenly eating 90% CPU and 75% memory on the production server.

As for additional statistics: For mean and variance there are some nice recursive algorithms that take up very little memory. These two statistics can be usefull enough in themselves for a lot of distributions because the central limit theorem states that distributions that that arise from a sufficiently large number of independent variables approach the normal distribution (which is fully defined by mean and variance) you can use one of the normality tests on the last N (where N sufficiently large but constrained by your memory requirements) to monitor wether the assumption of normality still holds.

@thkala started off with some literature citations. Let me extend that.

You can try the following structure:

We'll keep an array of ranges [min, max] sorted by min with count.

If number of ranges hits 2*n – collapse/merge array into n (half) by taking min from odd and max from even entries, summing their count.

It will settle on dynamic ranges of measurements. n can be modified to trade accuracy for memory (to lesser extent cpu). If you make values more discrete, ie. by rounding to 0.01 before insertion – it'll stabilise on ranges sooner.

You could improve accuracy by not assuming that each range holds uniformly distributed entries, ie. something cheap like sum of values which will give you avg = sum / count, it would help to read closer p95 value from range where it sits.

Not the answer you're looking for? Browse other questions tagged algorithm response-time percentile resampling or ask your own question.

558
What algorithms compute directions from point A to point B on a map?
2457
What does O(log n) mean exactly?
261
How do I calculate percentiles with python/numpy?
20
Fast Algorithm for computing percentiles to remove outliers
80
Algorithm for N-way merge
1
How can you compute percentiles and ranks with a generator on a single pass?
2
GCP Console: How are percentile charts calculated?
0
Reading response time percentile in Designing Data-Intensive Applications Book