Regex replace text but exclude when text is between specific tag

I have the following string:

Now I would replace the string 'Test' outside of tags an not between tags (e.g. replaced with '1234').

But two problems are not solved:

I hope someone has a solution to solve this problem.

same as zb226, but optimized with a lazy match

Also, using regexes on raw HTML is not recommended.

Let me remind you of the meaning of some symbols:

1) ?! is a negative lookahead, for example r(?!d) selects all r that are not directly followed by an d: 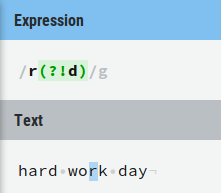 2) Therefore never start a negative lookahead without a character. Just (?!d) is meaningless: 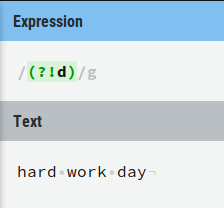 3) The ? can be used as a lazy match. For example .+E would select from

As mentioned in 2), it is meaningless to put a lookahead before the match. So the following is equivalent to protist answer:

also since < is not allowed, the lazy match ? is superfluous, so its also equivalent to

This selects all Test that are not followed by an </a> without the symbol < in between. This is why Test which appears before or after any <a ...> .. </a> will be replaced.

would be changed to

In order to catch that you could change your regex to

which does the following:

Also, using regexes on raw HTML is not recommended.

I agree with that. A problem is that it would cause problems if a tag is not closed or opened. For example all mentioned solutions here would change

This should do the trick:

Try it yourself on regexr.

Follow-up: As Adam explains above, the first part has no effect and can be dropped entirely:

Resurrecting this ancient question because it had a simple solution that wasn't mentioned.

With all the disclaimers about using regex to parse html, here is a simple way to do it.

In this version, the text to be replaced is captured in Group 1 and the replacement is performed by a simple callback or lambda.

Adapting the proposed solution by @protist, in this case searching for a phrase and excluding any matches inside of a script tag:

The answer provided by Adam, although more concise, takes longer to execute. This may be proven by editing the demo already mentioned in this comment.

108
Regex Pattern to Match, Excluding when… / Except between
3
Javascript regex: Find all URLs outside <a> tags - Nested Tags
0
How do I use regex to insert a new line in Japanese text?
1
NSRegularExpression matching and replacing with exclude