I find decorator pattern to be most confusing. Please consider the example provided in "Head first design patterns book". 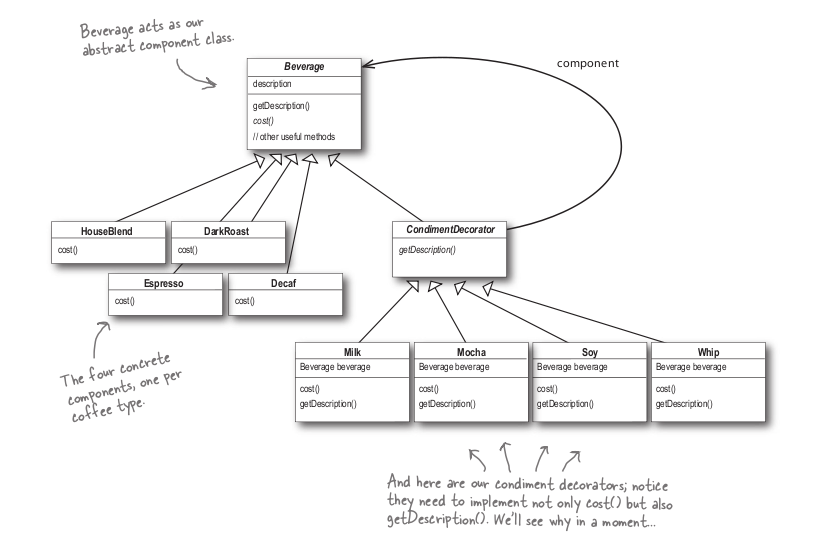 So to get a DarkRoast with double mocha and a whip, you have to write

I feel this is unnecessary. Here is my implementation,

IMO, both does same. If yes, what is the advantage of using decorator pattern here?

No, they are not the same.

Head First example has 1 drink with Mocha, Whip, Roast added. Your example has 3 beverages.
See this Head First code. It works on the same instance of the beverage

Your code creates 3 beverages (which means someone ordered 3 things separately).
In real life, it is not beverages, I guess. The beverage is one & flavors added on top of it.

The purpose of decorator is - to decorate. .Net has TextWriter and IndentedTextWriter (I guess), which basically takes the normal text of yours and applies indentation to it. It is similar to unix pipes in a way, if you think of it.

I don't know if I explained it well.

The whole point of the Decorator pattern is to add responsibilities via object composition, not inheritance. Inheritance is static, obj. composition is dynamic and more flexible. The possibilities for decoration are endless. It's also possible to un-decorate an object during runtime.

I think that you are actually representing something completely different.

In your example you have an object call order that receives beverages, and in the Head first example they are just decorating a beverage with toppings, this causes the following main problem.

Not the answer you're looking for? Browse other questions tagged c# java design-patterns or ask your own question.

1919
Difference between static class and singleton pattern?
3
Observer pattern used with decorator pattern
13
Decorator pattern implementation
3
How can I remove a decorator from an object?
0
Decorator Pattern from Head First Book
3
Functionality inside abstract decorator class instead of decorators