I'm trying to run the Visual Studio 2005 sample macro that attaches the debugger to calc.exe. Neither it nor any other macro seem to do anything when I run them. Calc.exe is running. "Tools->Options->Add-in/Macros Security->Allow macros to run" is checked. The error list shows no errors.

I had this same problem just happen to me. Macros in VS2005 were working fine, and then suddenly stopped one day. I checked permissions, that macros were enabled, etc. I ran the VS2005 setup program and repaired my installation, and none of this fixed it. Finally I uninstalled all the Windows updates that came in the last update cycle. This fixed the problem for me. I uninstalled a bunch at once, so I don't know exactly which update caused the problem, but I know it was at least one of these:

as I uninstalled all of these, and then the macros started working again. All of these Windows updates happened for me on Feb 13, 2014.

Hope this helps someone else. Mark

P.S. I later discovered it was KB2898857 and you can leave it installed if you edit a few config files, as described here:

After multiple attempts to fix it. I discovered it was a stupid problem.

I had another macro in another module that didn't compile (I had semi-colons at the end of lines).

Even though I was running a macro in a different module it didn't seam to matter.

If you are having this problem an easy thing you can check is looking in the error list for any errors in your code. It's very easy to put semi-colons at the end of your lines out of habit. 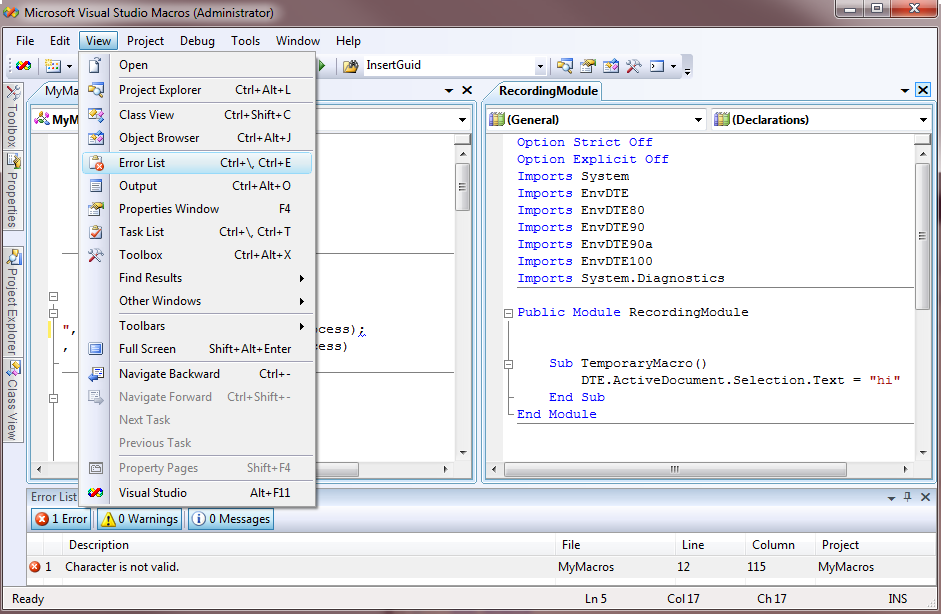 Not the answer you're looking for? Browse other questions tagged visual-studio-2005 macros visual-studio-macros or ask your own question.