Cannot get how to perform squash rebase for the current branch. The console command would be

and then squash as usually. But how to do the same in TGit?

Script to initialize the case

As a result after squashing we would have 1 commit with 3 files.

You can combine two adjacent commits using the GUI as follows. Remember not do combine commits already on the shared repository. See: 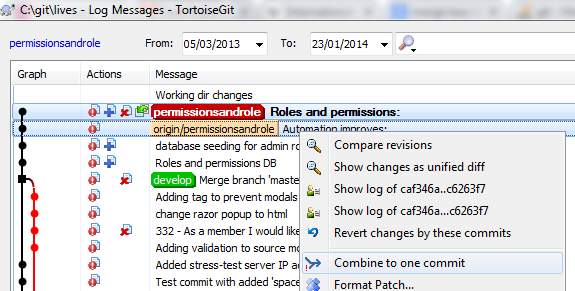 Note that in your example script you would squash / fixup to the root commit, which is a special case and does not work as described above because the root commit has no parent that you could select in step 2.

Here's what I did using Tortoise Git & storing the repo on Assembla (which is apparently via similar to GitHub).

I decided I wanted to effectively delete my entire commit history, and start the repo over from scratch. I could have deleted the local git folder and the corresponding repo in Assembla, and then recreated it, but thought it was better to figure out how to do this the “right way”.

So, here’s how I achieved it:

1) Using Tortoise Git, display the repo’s log. Highlight all the commits, right click on them, and select “combine into one commit”.

2) In the dialog that pops up, delete the commit comment (which becomes a combination of all the prior comments), and replace it with a single comment e.g. REBASE. Then initiate the commit. The local repo will then be effectively started from scratch (with all the files still added to it of course) without having to delete and recreate it.

3) Unfortunately, you can’t just push it to Assembla. It will reject this, insisting that your “head” is behind the remote branch. So, to solve that first go to the “Settings” page for the repo in Assembla. Enable “Allow –force push”.

4) Now perform a “forced push”. I don’t know if Tortoise Git has a gui option for this, but it is easy to do via the command prompt:

To "force push" with TortoiseGit, in the push dialog there are checkboxes to force "known changes" and "unknown changes". I'm not sure what the difference is, but they both result in using the git --force switch. Try "known changes" to begin with.

You can do this from the Rebase window. This video covers it well: https://youtu.be/qrMubRPkkrE?t=490

As shown in the video:

One way is: Go to log dialog and select "rebase onto *" and then check the "Force" checkbox and mark the commits for "squash" (e.g. by typing 'q').

Not the answer you're looking for? Browse other questions tagged git tortoisegit or ask your own question.

3513
Undoing a git rebase
9819
How do I undo 'git add' before commit?
22741
How do I undo the most recent local commits in Git?
8043
How do I force “git pull” to overwrite local files?
3585
Delete commits from a branch in Git
18033
How do I delete a Git branch locally and remotely?
1234
How can I merge two commits into one if I already started rebase?
4132
Squash my last X commits together using Git
1645
How can I reconcile detached HEAD with master/origin?
9377
How do I rename a local Git branch?