What part of Hindley-Milner do you not understand?

I swear there used to be a T-shirt for sale featuring the immortal words: 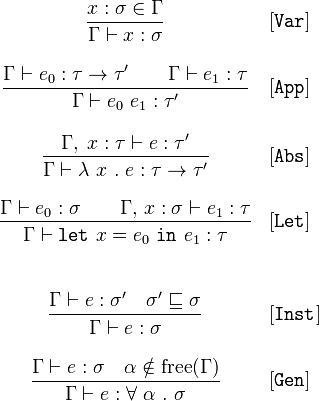 do you not understand?

In particular, I often see notation like this in Haskell papers, but I have no clue what any of it means. I have no idea what branch of mathematics it's supposed to be.

I recognize the letters of the Greek alphabet of course and symbols such as "∉" (which usually means that something is not an element of a set).

On the other hand, I've never seen "⊢" before (Wikipedia claims it might mean "partition"). I'm also unfamiliar with the use of the vinculum here. (Usually, it denotes a fraction, but that does not appear to be the case here.)

If somebody could at least tell me where to start looking to comprehend what this sea of symbols means, that would be helpful.

As requested: operator precedence, from highest to lowest:

Another thing to keep in mind is that some letters have traditional meanings; particularly, Γ represents the "context" you're in—that is, what the types of other things you've seen are. So something like Γ ⊢ ... means "the expression ... when you know the types of every expression in Γ.

The ⊢ symbol essentially means that you can prove something. So Γ ⊢ ... is a statement saying "I can prove ... in a context Γ. These statements are also called type judgements.

Another thing to keep in mind: in math, just like ML and Scala, x : σ means that x has type σ. You can read it just like Haskell's x :: σ.

What each rule means

So, knowing this, the first expression becomes easy to understand: if we know that x : σ ∈ Γ (that is, x has some type σ in some context Γ), then we know that Γ ⊢ x : σ (that is, in Γ, x has type σ). So really, this isn't telling you anything super-interesting; it just tells you how to use your context.

The other rules are also simple. For example, take [App]. This rule has two conditions: e₀ is a function from some type τ to some type τ' and e₁ is a value of type τ. Now you know what type you will get by applying e₀ to e₁! Hopefully this isn't a surprise :).

The next rule has some more new syntax. Particularly, Γ, x : τ just means the context made up of Γ and the judgement x : τ. So, if we know that the variable x has a type of τ and the expression e has a type τ', we also know the type of a function that takes x and returns e. This just tells us what to do if we've figured out what type a function takes and what type it returns, so it shouldn't be surprising either.

The [Inst] rule deals with sub-typing. It says that if you have a value of type σ' and it is a sub-type of σ (⊑ represents a partial ordering relation) then that expression is also of type σ.

The final rule deals with generalizing types. A quick aside: a free variable is a variable that is not introduced by a let-statement or lambda inside some expression; this expression now depends on the value of the free variable from its context.The rule is saying that if there is some variable α which is not "free" in anything in your context, then it is safe to say that any expression whose type you know e : σ will have that type for any value of α.

How to use the rules

So, now that you understand the symbols, what do you do with these rules? Well, you can use these rules to figure out the type of various values. To do this, look at your expression (say f x y) and find a rule that has a conclusion (the bottom part) that matches your statement. Let's call the thing you're trying to find your "goal". In this case, you would look at the rule that ends in e₀ e₁. When you've found this, you now have to find rules proving everything above the line of this rule. These things generally correspond to the types of sub-expressions, so you're essentially recursing on parts of the expression. You just do this until you finish your proof tree, which gives you a proof of the type of your expression.

So all these rules do is specify exactly—and in the usual mathematically pedantic detail :P—how to figure out the types of expressions.

Now, this should sound familiar if you've ever used Prolog—you're essentially computing the proof tree like a human Prolog interpreter. There is a reason Prolog is called "logic programming"! This is also important as the first way I was introduced to the H-M inference algorithm was by implementing it in Prolog. This is actually surprisingly simple and makes what's going on clear. You should certainly try it.

Note: I probably made some mistakes in this explanation and would love it if somebody would point them out. I'll actually be covering this in class in a couple of weeks, so I'll be more confident then :P.

See "Practical Foundations of Programming Languages.", chapters 2 and 3, on the style of logic through judgements and derivations. The entire book is now available on Amazon.

Inductive definitions are an indispensable tool in the study of programming languages. In this chapter we will develop the basic framework of inductive definitions, and give some examples of their use. An inductive definition consists of a set of rules for deriving judgments, or assertions, of a variety of forms. Judgments are statements about one or more syntactic objects of a specified sort. The rules specify necessary and sufficient conditions for the validity of a judgment, and hence fully determine its meaning.

We start with the notion of a judgment, or assertion about a syntactic object. We shall make use of many forms of judgment, including examples such as these:

How do I understand the Hindley-Milner rules?

Hindley-Milner is a set of rules in the form of sequent calculus (not natural deduction) that demonstrates that we can deduce the (most general) type of a program from the construction of the program without explicit type declarations.

The symbols and notation

Everything above the line is the premise, everything below is the conclusion (Per Martin-Löf)

I have taken some of the more complex examples from the rules and inserted redundant parentheses that show precedence:

Then, large spaces separating assertion statements and other preconditions indicates a set of such preconditions, and finally the horizontal line separating premise from conclusion brings up the end of the precedence order.

What follows here are English interpretations of the rules, each followed by a loose restatement and an explanation.

This is basically a tautology. An identifier name is a variable or a function.

To restate the rule, we know that function application returns type 𝜏' because the function has type 𝜏→𝜏' and gets an argument of type 𝜏.

This means that if we know that a function returns a type, and we apply it to an argument, the result will be an instance of the type we know it returns.

Again, when we see a function that takes 𝑥 and returns an expression 𝑒, we know it's of type 𝜏→𝜏' because 𝑥 (a 𝜏) asserts that 𝑒 is a 𝜏'.

This means if we have an expression 𝑒₀ that is a 𝜎 (being a variable or a function), and some name, 𝑥, also a 𝜎, and an expression 𝑒₁ of type 𝜏, then we can substitute 𝑒₀ for 𝑥 wherever it appears inside of 𝑒₁.

If an instance is of a type that is a subtype of another type, then it is also an instance of that super-type - the more general type.

This means we can generalize a program to accept all types for arguments not already bound in the containing scope (variables that are not non-local). These bound variables are substitutable.

Given certain assumptions (such as no free/undefined variables, a known environment, ) we know the types of:

These rules combined allow us to prove the most general type of an asserted program, without requiring type annotations.

The notation comes from natural deduction.

The 6 rules are very easy.

Var rule is rather trivial rule - it says that if type for identifier is already present in your type environment, then to infer the type you just take it from the environment as is.

App rule says that if you have two identifiers e0 and e1 and can infer their types, then you can infer the type of application e0 e1. The rule reads like this if you know that e0 :: t0 -> t1 and e1 :: t0 (the same t0!), then application is well-typed and the type is t1.

Abs and Let are rules to infer types for lambda-abstraction and let-in.

Inst rule says that you can substitute a type with less general one.

The turnstile ⊢ means that from the knowledge on the left, we can deduce what's on the right.

The first rule [Var] can thus be read:
If our knowledge Γ contains the pair e : σ, then we can deduce from Γ that e has type σ.

Not the answer you're looking for? Browse other questions tagged haskell functional-programming lambda-calculus hindley-milner denotational-semantics or ask your own question.

19
What is a solid example of something that can be done with list comprehensions that is tricky with high order functions?
18
How does Rust's type inference work across multiple statements?
3
How to comfortably deal with the type system on Haskell?
10
How can I interpret the typing rules on this paper?
6
Confusion regarding composition in Haskell
3
How does the compiler determine types in sml
0
Type of anonymous functions in Haskell
1
What are the weird equations found while researching Simply Typed Lambda Calculus
1
How does the type inference algorithm resolve guarded equations?
-1
How do I find out the type of a haskell expression without ghci?
See more linked questions