A site I built with Kohana was slammed with an enormous amount of traffic yesterday, causing me to take a step back and evaluate some of the design. I'm curious what are some standard techniques for optimizing Kohana-based applications?

I'm interested in benchmarking as well. Do I need to setup Benchmark::start() and Benchmark::stop() for each controller-method in order to see execution times for all pages, or am I able to apply benchmarking globally and quickly?

I will be using the Cache-library more in time to come, but I am open to more suggestions as I'm sure there's a lot I can do that I'm simply not aware of at the moment.

What I will say in this answer is not specific to Kohana, and can probably apply to lots of PHP projects.

Here are some points that come to my mind when talking about performance, scalability, PHP, ...
I've used many of those ideas while working on several projects -- and they helped; so they could probably help here too.

First of all, when it comes to performances, there are many aspects/questions that are to consider:

The first thing that could be really useful is using a reverse proxy, like varnish, in front of your webserver: let it cache as many things as possible, so only requests that really need PHP/MySQL calculations (and, of course, some other requests, when they are not in the cache of the proxy) make it to Apache/PHP/MySQL.

About using a reverse-proxy as cache, for a PHP application, you can, for instance, take a look at Benchmark Results Show 400%-700% Increase In Server Capabilities with APC and Squid Cache.
(Yep, they are using Squid, and I was talking about varnish -- that's just another possibility ^^ Varnish being more recent, but more dedicated to caching)

If you do that well enough, and manage to stop re-generating too many pages again and again, maybe you won't even have to optimize any of your code ;-)
At least, maybe not in any kind of rush... And it's always better to perform optimizations when you are not under too much presure...

As a sidenote: you are saying in the OP:

A site I built with Kohana was slammed with an enormous amount of traffic yesterday,

This is the kind of sudden situation where a reverse-proxy can literally save the day, if your website can deal with not being up to date by the second:

About that, How can I detect and survive being “Slashdotted”? might be an interesting read.

On the PHP side of things:

First of all: are you using a recent version of PHP? There are regularly improvements in speed, with new versions ;-)
For instance, take a look at Benchmark of PHP Branches 3.0 through 5.3-CVS.

Note that performances is quite a good reason to use PHP 5.3 (I've made some benchmarks (in French), and results are great)...
Another pretty good reason being, of course, that PHP 5.2 has reached its end of life, and is not maintained anymore!

Are you using any opcode cache?

As much as possible, it is better to avoid doing the same thing over and over again.

The main thing I'm thinking about is, of course, SQL Queries: many of your pages probably do the same queries, and the results of some of those is probably almost always the same... Which means lots of "useless" queries made to the database, which has to spend time serving the same data over and over again.
Of course, this is true for other stuff, like Web Services calls, fetching information from other websites, heavy calculations, ...

It might be very interesting for you to identify:

And store these data/results in some kind of cache, so they are easier to get -- faster -- and you don't have to go to your SQL server for "nothing".

Great caching mechanisms are, for instance:

I'm pretty sure your framework comes with some cache-related stuff; you probably already know that, as you said "I will be using the Cache-library more in time to come" in the OP ;-)

Now, a nice thing to do would be to use the Xdebug extension to profile your application: it often allows to find a couple of weak-spots quite easily -- at least, if there is any function that takes lots of time.

Configured properly, it will generate profiling files that can be analysed with some graphic tools, such as:

For instance, here are a couple screenshots of KCacheGrind: 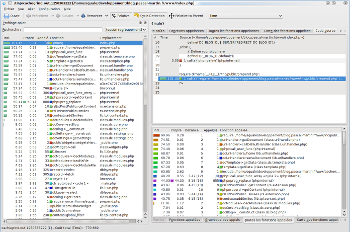 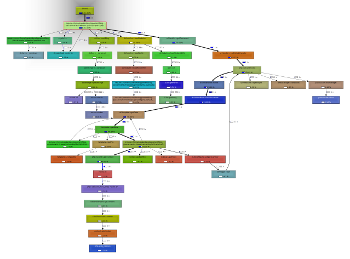 (BTW, the callgraph presented on the second screenshot is typically something neither WinCacheGrind nor Webgrind can do, if I remember correctly ^^ )

(Thanks @Mikushi for the comment) Another possibility that I haven't used much is the the xhprof extension : it also helps with profiling, can generate callgraphs -- but is lighter than Xdebug, which mean you should be able to install it on a production server.

You should be able to use it alonside XHGui, which will help for the visualisation of data.

On the SQL side of things:

Now that we've spoken a bit about PHP, note that it is more than possible that your bottleneck isn't the PHP-side of things, but the database one...

Still, the two most important things are:

If you are still reading, what else could be optimized?

Well, there is still room for improvements... A couple of architecture-oriented ideas might be:

Well, maybe some of those ideas are a bit overkill in your situation ^^
But, still... Why not study them a bit, just in case ? ;-)

And what about Kohana?

Your initial question was about optimizing an application that uses Kohana... Well, I've posted some ideas that are true for any PHP application... Which means they are true for Kohana too ;-)
(Even if not specific to it ^^)

I said: use cache; Kohana seems to support some caching stuff (You talked about it yourself, so nothing new here...)
If there is anything that can be done quickly, try it ;-)

I also said you shouldn't do anything that's not necessary; is there anything enabled by default in Kohana that you don't need?
Browsing the net, it seems there is at least something about XSS filtering; do you need that?

Still, here's a couple of links that might be useful:

And, to conclude, a simple thought:

I'm not saying you shouldn't optimize: you definitely should!
But go for "quick" optimizations that will get you big rewards first: using some opcode cache might help you get between 10 and 50 percent off your server's CPU-load... And it takes only a couple of minutes to set up ;-) On the other side, spending 3 days for 2 percent...

Oh, and, btw: before doing anything: put some monitoring stuff in place, so you know what improvements have been made, and how!
Without monitoring, you will have no idea of the effect of what you did... Not even if it's a real optimization or not!

For instance, you could use something like RRDtool + cacti.
And showing your boss some nice graphics with a 40% CPU-load drop is always great ;-)

Anyway, and to really conclude: have fun!
(Yes, optimizing is fun!)
(Ergh, I didn't think I would write that much... Hope at least some parts of this are useful... And I should remember this answer: might be useful some other times...)

Use XDebug and WinCacheGrind or WebCacheGrind to profile and analyze slow code execution. 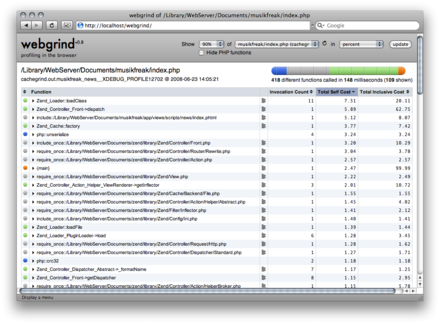 Use a lot of caching. If your pages are relatively static, then reverse proxy might be the best way to do it.

Kohana is out of the box very very fast, except for the use of database objects. To quote Zombor "You can reduce memory usage by ensuring you are using the database result object instead of result arrays." This makes a HUGEE performance difference on a site that is being slammed. Not only does it use more memory, it slows down execution of scripts.

Also - you must use caching. I prefer memcache and use it in my models like this:

This will also dramatically increase performance. The above two techniques improved a sites performance by 80%.

If you gave some more information about where you think the bottleneck is, I'm sure we could give some better ideas.

Also check out yslow (google it) for some other performance tips.

Strictly related to Kohana (you probably already have done this, or not):

I totally agree with the XDebug and caching answers. Don't look into the Kohana layer for optimization until you've identified your biggest speed and scale bottlenecks.

XDebug will tell you were you spend the most of your time and identify 'hotspots' in your code. Keep this profiling information so you can baseline and measure performance improvements.

Example problem and solution: If you find that you're building up expensive objects from the database each time, that don't really change often, then you can look at caching them with memcached or another mechanism. All of these performance fixes take time and add complexity to your system, so be sure of your bottlenecks before you start fixing them.

47
How can I detect and survive being "Slashdotted"?
16
Optimizations to reduce website loading time
6
Tips to save up our page load time
3
CPU load with file_exists in php
-2
PHP IF Statement Evaluation & Server Overhead
1
Preformance difference between classes and just functions
3
PHP Framework for large scale application
1
Need help in speeding up my php based site

627
What is the most effective way for float and double comparison?
1239
Secure hash and salt for PHP passwords
164
while (1) Vs. for (;;) Is there a speed difference?
3242
Improve INSERT-per-second performance of SQLite
4
What are some useful techniques for optimizing raw SOAP requests and responses?
498
Why does GCC generate 15-20% faster code if I optimize for size instead of speed?
2
Concrete 5 CMS Scalability and Speed
4
Optimizing this "coincidence search" algorithm, for speed