What is Express.js? [closed]

Ask Question
Asked 10 years ago
Modified 12 months ago
Viewed 236k times
502
Closed. This question is opinion-based. It is not currently accepting answers.

The community reviewed whether to reopen this question 5 months ago and left it closed:

Needs more focus Update the question so it focuses on one problem only by editing this post.

I am a learner in Node.js.

Express.js is a Node.js framework. It's the most popular framework as of now (the most starred on NPM). 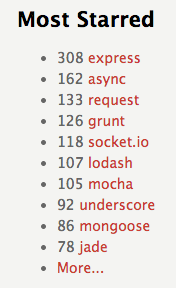 It's built around configuration and granular simplicity of Connect middleware. Some people compare Express.js to Ruby Sinatra vs. the bulky and opinionated Ruby on Rails.

2) What is the purpose of it with Node.js?

That you don't have to repeat same code over and over again. Node.js is a low-level I/O mechanism which has an HTTP module. If you just use an HTTP module, a lot of work like parsing the payload, cookies, storing sessions (in memory or in Redis), selecting the right route pattern based on regular expressions will have to be re-implemented. With Express.js, it is just there for you to use.

3) Why do we actually need Express.js? How it is useful for us to use with Node.js?

The first answer should answer your question. If no, then try to write a small REST API server in plain Node.js (that is, using only core modules) and then in Express.js. The latter will take you 5-10x less time and lines of code.

What is Redis? Does it come with Express.js?

Redis is a fast persistent key-value storage. You can optionally use it for storing sessions with Express.js, but you don't need to. By default, Express.js has memory storage for sessions. Redis also can be use for queueing jobs, for example, email jobs.

Check out my tutorial on REST API server with Express.js.

MVC but not by itself

Express.js is not an model-view-controller framework by itself. You need to bring your own object-relational mapping libraries such as Mongoose for MongoDB, Sequelize (http://sequelizejs.com) for SQL databases, Waterline (https://github.com/balderdashy/waterline) for many databases into the stack.

Other Node.js frameworks to consider (https://www.quora.com/Node-js/Which-Node-js-framework-is-best-for-building-a-RESTful-API):

UPDATE: I put together this resource that aid people in choosing Node.js frameworks: http://nodeframework.com

UPDATE2: We added some GitHub stats to nodeframework.com so now you can compare the level of social proof (GitHub stars) for 30+ frameworks on one page.

This is over simplifying it, but Express.js is to Node.js what Ruby on Rails or Sinatra is to Ruby.

Express 3.x is a light-weight web application framework to help organize your web application into an MVC architecture on the server side. You can use a variety of choices for your templating language (like EJS, Jade, and Dust.js).

You can then use a database like MongoDB with Mongoose (for modeling) to provide a backend for your Node.js application. Express.js basically helps you manage everything, from routes, to handling requests and views.

Redis is a key/value store -- commonly used for sessions and caching in Node.js applications. You can do a lot more with it, but that's what I'm using it for. I use MongoDB for more complex relationships, like line-item <-> order <-> user relationships. There are modules (most notably connect-redis) that will work with Express.js. You will need to install the Redis database on your server.

Here is a link to the Express 3.x guide: https://expressjs.com/en/3x/api.html

Kraken: Secure and scalable layer that extends Express by providing structure and convention.

I couldn't be more concise than this. For all your other needs and information, Google is your friend.

ExpressJS is bare-bones web application framework on top of NodeJS.

It can be used to build WebApps, RESTFUL APIs etc quickly.

ExpressJS keeps only a minimalist functionality as core features and as such there are no ORMs or DBs supported as default. But with a little effort expressjs apps can be integrated with different databases.

For a getting started guide on creating ExpressJS apps, look into the following link:

Express is a module framework for Node that you can use for applications that are based on server/s that will "listen" for any input/connection requests from clients. When you use it in Node, it is just saying that you are requesting the use of the built-in Express file from your Node modules.

Express is the "backbone" of a lot of Web Apps that have their back end in NodeJS. From what I know, its primary asset being the providence of a routing system that handles the services of "interaction" between 2 hosts. There are plenty of alternatives for it, such as Sails.

Express.js is a framework used for Node and it is most commonly used as a web application for node js.

Here is a link to a video on how to quickly set up a node app with express https://www.youtube.com/watch?v=QEcuSSnqvck

Express.js created by TJ Holowaychuk and now managed by the community. It is one of the most popular frameworks in the node.js. Express can also be used to develop various products such as web applications or RESTful API.For more information please read on the expressjs.com official site.

ExpressJS is a web application framework that provides you with a simple API to build websites, web apps and back ends. With ExpressJS, you need not worry about low level protocols, processes, etc. Fast, unopinionated, minimalist web framework for Node.js

Pug (earlier known as Jade) is a terse language for writing HTML templates. It −

Produces HTML Supports dynamic code Supports reusability (DRY) It is one of the most popular template language used with Express.

A perfect example of its power

18
NextJS vs Express
3
Making website with Node.js without framework
2
difference between node.js and express
0
Why should i use Express if i can do everything with just nodejs itself?
1
How nodejs work with Angular ? Is it api or something different?
-1
NodeJS : Differences between http.createServer and express.createServer?
1
How do I manipulate data on a webpage from node.js

1120
Node.js + Nginx - What now?
2192
How to decide when to use Node.js?
1533
What is the purpose of Node.js module.exports and how do you use it?
1130
How can I do Base64 encoding in Node.js?
2006
How can I update NodeJS and NPM to their latest versions?
1479
How to get GET (query string) variables in Express.js on Node.js?
740
Why doesn't adding CORS headers to an OPTIONS route allow browsers to access my API?
906
npm WARN package.json: No repository field
2836
What is the --save option for npm install?
712
Error: request entity too large