I have a huge jQuery application, and I'm using the below two methods for click events.

I use either the first or second method in my application. Which one is better? Better for performance? And standard?

Basically registering an event in modern way is the unobtrusive way of handling events. Also to register more than one event listener for the target you can call addEventListener() for the same target.

Why use addEventListener? (From MDN)

addEventListener is the way to register an event listener as specified in W3C DOM. Its benefits are as follows:

Other methods such as setting the HTML attributes, example:

are old and they can be over written easily.

HTML attribute should be avoided as It makes the markup bigger and less readable. Concerns of content/structure and behavior are not well-separated, making a bug harder to find.

The problem with the DOM element properties method is that only one event handler can be bound to an element per event.

For better performance, use the native JavaScript. For faster development, use jQuery. Check the comparison in performance at jQuery vs Native Element Performance.

From what I understand, your question is not really about whether to use jQuery or not. It's rather: Is it better to bind events inline in HTML or through event listeners?

Inline binding is deprecated. Moreover this way you can only bind one function to a certain event.

Therefore I recommend using event listeners. This way, you'll be able to bind many functions to a single event and to unbind them later if needed. Consider this pure JavaScript code:

This works in most modern browsers.

However, if you already include jQuery in your project — just use jQuery: .on or .click function.

Go for this as it will give you both standard and performance.

As the second method is simple JavaScript code and is faster than jQuery. But here performance will be approximately the same.

You could combine them, use jQuery to bind the function to the click

$('#myDiv').click is better, because it separates JavaScript code from HTML. One must try to keep the page behaviour and structure different. This helps a lot.

Difference in works. If you use click(), you can add several functions, but if you use an attribute, only one function will be executed - the last one.

If we are talking about performance, in any case directly using is always faster, but using of an attribute, you will be able to assign only one function.

IMHO, onclick is the preferred method over .click only when the following conditions are met:

I formed this opinion because of the fact that the JavaScript engines on mobile devices are 4 to 7 times slower than their desktop counterparts which were made in the same generation. I hate it when I visit a site on my mobile device and receive jittery scrolling because the jQuery is binding all of the events at the expense of my user experience and battery life. Another recent supporting factor, although this should only be a concern with government agencies ;) , we had IE7 pop-up with a message box stating that JavaScript process is taking to long...wait or cancel process. This happened every time there were a lot of elements to bind to via jQuery.

Seperation of concerns is key here, and so the event binding is the generally accepted method. This is basically what a lot of the existing answers have said.

However don't throw away the idea of declarative markup too quickly. It has it's place, and with frameworks like Angularjs, is the centerpiece.

There needs to be an understanding that the whole <div id="myDiv" onClick="divFunction()">Some Content</div> was shamed so heavily because it was abused by some developers. So it reached the point of sacrilegious proportions, much like tables. Some developers actually avoid tables for tabular data. It's the perfect example of people acting without understanding.

Although I like the idea of keeping my behaviour seperate from my views. I see no issue with the markup declaring what it does (not how it does it, that's behaviour). It might be in the form of an actual onClick attribute, or a custom attribute, much like bootstraps javascript components.

This way, by glancing just at the markup, you can see what is does, instead of trying to reverse lookup javascript event binders.

So, as a third alternative to the above, using data attributes to declarativly announce the behaviour within the markup. Behaviour is kept out of the view, but at a glance you can see what is happening.

Note The main disadvantage with the second example is the pollution of global namespace. This can be circumvented by either using the third alternative above, or frameworks like Angular and their ng-click attributes with automatically scope.

onclick, onmouseover, onmouseout, etc. events are actually bad for performance (in Internet Explorer mainly, go figure). If you code using Visual Studio, when you run a page with these, every single one of these will create a separate SCRIPT block taking up memory, and thus slowing down performance.

Not to mention you should have a separation of concerns: JavaScript and layouts should be separated!

It is always better to create evenHandlers for any of these events, one event can capture hundreds/thousands of items, instead of creating thousands of separate script blocks for each one!

(Also, everything everyone else is saying.)

Neither one is better in that they may be used for different purposes. onClick (should actually be onclick) performs very slightly better, but I highly doubt you will notice a difference there.

It is worth noting that they do different things: .click can be bound to any jQuery collection whereas onclick has to be used inline on the elements you want it to be bound to. You can also bind only one event to using onclick, whereas .click lets you continue to bind events.

In my opinion, I would be consistent about it and just use .click everywhere and keep all of my JavaScript code together and separated from the HTML.

Don't use onclick. There isn't any reason to use it unless you know what you're doing, and you probably don't.

Well, one of the main ideas behind jQuery is to separate JavaScript from the nasty HTML code. The first method is the way to go.

Most of the time, native JavaScript methods are a better choice over jQuery when performance is the only criteria, but jQuery makes use of JavaScript and makes the development easy. You can use jQuery as it does not degrade performance too much. In your specific case, the difference of performance is ignorable.

There are already many good answers here however, authors sometimes mention about performance but actually nobody investigate it yet - so I will focus on this aspect here. Today I perform test on Chrome 83.0, Safari 13.1 and Firefox 77.0 for solutions mention in question and additionally few alternative solutions (some of them was mention in other answers).

I compare here solutions A-H because they operate on elements id. I also show results for solutions which use class (I,J,K) as reference. 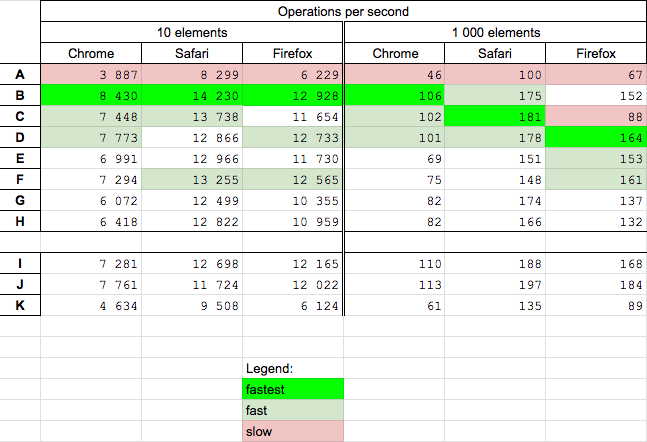 Actually It was not easy to design performance test for this question. I notice that for all tested solutions, performance of triggering events for 10K div-s was fast and manually I was not able to detect any differences between them (you can run below snippet to check it yourself). So I focus on measure execution time of generate html and bind event handlers for two cases

Here is example test for Chrome

The first method of using onclick is not jQuery but simply Javascript, so you do not get the overhead of jQuery. The jQuery way can expanded via selectors if you needed to add it to other elements without adding the event handler to each element, but as you have it now it is just a question if you need to use jQuery or not.

Personally since you are using jQuery I would stick with it as it is consistent and does decouple the markup from the script.

The first method is to prefer. It uses the advanced event registration model[s], which means you can attach multiple handlers to the same element. You can easily access the event object, and the handler can live in any function's scope. Also, it is dynamic, i.e it can be invoked at any time and is especially well-suited for dynamically generated elements. Whether you use jQuery, an other library or the native methods directly does not really matter.

The second method, using inline attributes, needs a lot of global functions (which leads to namespace pollution) and mixes the content/structure (HTML) with the behavior (JavaScript). Do not use that.

Your question about performance or standards can't be easily answered. The two methods are just completely different, and do different things. The first one is mightier, while the second one is despised (considered bad style).

Say you have a button nested inside a Javascript/Jquery generated html element (the .html() or .innerHTML kind of elements) then you need to first pick outtermost element(parent) and do this

by outermost element I mean the element that embeds the .html() e.g

9
Trigger button click in javascript?
8
Is it better to call functions using onclick or bind events using .click?
1
Using .click() in jquery vs calling a function using onclick
2
document.ready with change event or a function which gets called onChange. Which one is better way and why?
0
Javascript - I need equivalent of jQuery trigger click on ID
-3
Passing id of an element to ajax without using onclick in html
1
Javascript callbacks vs dom events?
-2
jquery onclick submit not working properly
0
How to use function parameters with jQuery onclick?
150
Why is using onClick() in HTML a bad practice?
See more linked questions

448
jQuery Set Cursor Position in Text Area
617
How to debug JavaScript / jQuery event bindings with Firebug or similar tools?
574
What's the difference between '$(this)' and 'this'?
3210
event.preventDefault() vs. return false
478
How do I prevent a parent's onclick event from firing when a child anchor is clicked?
342
jQuery click events firing multiple times
241
Show/hide 'div' using JavaScript