How to calculate moving average without keeping the count and data-total?

I am trying to find a way to calculate a moving cumulative average without storing the count and total data that is received so far.

I came up with two algorithms but both need to store the count:

The problem with these methods is that the count gets bigger and bigger resulting in losing precision in the resulting average.

The first method uses the old count and next count which are obviously 1 apart. This got me thinking that perhaps there is a way to remove the count but unfortunately I haven't found it yet. It did get me a bit further though, resulting in the second method but still count is present.

Is it possible, or am I just searching for the impossible?

You can simply do:

Where N is the number of samples where you want to average over. Note that this approximation is equivalent to an exponential moving average. See: Calculate rolling / moving average in C++

This is assuming the count only changed by one value. In case it is changed by M values then:

This is the mathematical formula (I believe the most efficient one), believe you can do further code by yourselves

From a blog on running sample variance calculations, where the mean is also calculated using Welford's method:

Here's yet another answer offering commentary on how Muis, Abdullah Al-Ageel and Flip's answer are all mathematically the same thing except written differently.

Sure, we have José Manuel Ramos's analysis explaining how rounding errors affect each slightly differently, but that's implementation dependent and would change based on how each answer were applied to code.

There is however a rather big difference

And here we come to the answer below. It's essentially the same old exponential weighted moving average as the others, so if you were looking for an alternative, stop right here.

The difference is the min(counter, FACTOR) part. This is the same as saying min(Flip's k, Muis's N).

FACTOR is a constant that affects how quickly the average "catches up" to the latest trend. Smaller the number the faster. (At 1 it's no longer an average and just becomes the latest value.)

This answer requires the running counter counter. If problematic, the min(counter, FACTOR) can be replaced with just FACTOR, turning it into Muis's answer. The problem with doing this is the moving average is affected by whatever average is initiallized to. If it was initialized to 0, that zero can take a long time to work its way out of the average.

How it ends up looking 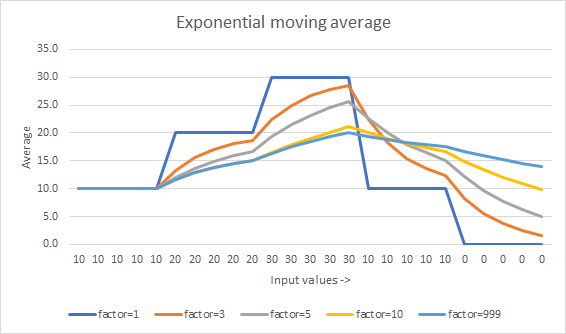 The answer of Flip is computationally more consistent than the Muis one.

Using double number format, you could see the roundoff problem in the Muis approach:

When you divide and subtract, a roundoff appears in the previous stored value, changing it.

However, the Flip approach preserves the stored value and reduces the number of divisions, hence, reducing the roundoff, and minimizing the error propagated to the stored value. Adding only will bring up roundoffs if there is something to add (when N is big, there is nothing to add)

Those changes are remarkable when you make a mean of big values tend their mean to zero.

I show you the results using a spreadsheet program: 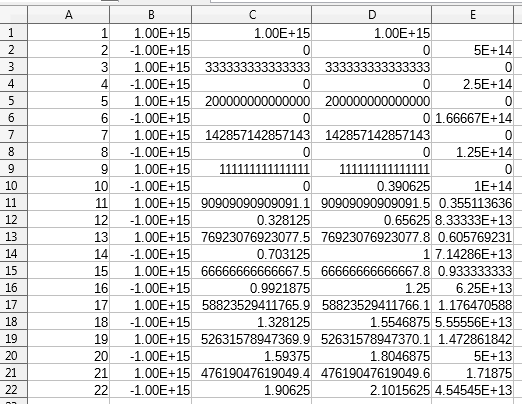 The A and B columns are the n and X_n values, respectively.

The C column is the Flip approach, and the D one is the Muis approach, the result stored in the mean. The E column corresponds with the medium value used in the computation.

A graph showing the mean of even values is the next one: 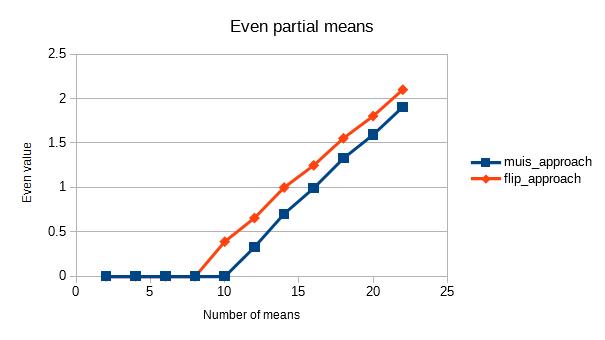 As you can see, there is big differences between both approachs.

An example using javascript, for comparison:

A neat Python solution based on the above answers:

Not the answer you're looking for? Browse other questions tagged moving-average or ask your own question.