How to make a node.js application run permanently?

On a Debian server, I installed Node.js. I understand how to launch an app from putty with this command line:

How to make a Node.js application run permanently?

As you can guess, I am a beginner with Linux and Node.js.

And then start your application with:

Or as a service:

Forever restarts your app when it crashes or stops for some reason. To restrict restarts to 5 you could use:

Note the integer in the brackets and use it as following to stop a process:

If you're working on your application file, you can use the -w parameter to restart automatically whenever your server.js file changes:

Although the other answers solve the OP's problem, they are all overkill and do not explain why he or she is experiencing this issue.

The key is this line, "I close putty, then I cannot reach the address"

When you are logged into your remote host on Putty you have started an SSH linux process and all commands typed from that SSH session will be executed as children of said process.

Your problem is that when you close Putty you are exiting the SSH session which kills that process and any active child processes. When you close putty you inadvertently kill your server because you ran it in the foreground. To avoid this behavior run the server in the background by appending & to your command:

The problem here is a lack of linux knowledge and not a question about node. For some more info check out: http://linuxconfig.org/understanding-foreground-and-background-linux-processes

As others have mentioned, the node server may still die when exiting the terminal. A common gotcha I have come across is that even though the node process is running in bg, it's stdout and stderr is still pointed at the terminal. This means that if the node server writes to console.log or console.error it will receive a broken pipe error and crash. This can be avoided by piping the output of your process:

If the problem persists then you should look into things like tmux or nohup, which are still more robust than node specific solutions, because they can be used to run all types of processes (databases, logging services, other languages).

A common mistake that could cause the server to exit is that after running the nohup node your_path/server.js & you simply close the Putty terminal by a simple click. You should use exit command instead, then your node server will be up and running.

You can use PM2, it's a production process manager for Node.js applications with a built-in load balancer.

If you using express then you can start your app like

It will list all process. You can then stop / restart your service by using ID or Name of the app with following command.

I'd recommend looking for something such as Forever to restart Node in the event of a crash, and handle daemonizing this for you.

If you just want to run your node app in the terminal always, just use screen.

ctrl + a and then ctrl + d to dismiss

To get is back:

If there's more than one you can list all the screens with: screen -ls

And then: screen -r pid_number

You could simply use this

This will keep the application running and to shut it down you will have to kill it.

Forever is a very good NodeJs module to do exactly that.

Install forever by typing in the command line

Then use the following command to run a node.js script

You are good to go. Additionally you can run

to see all the running scripts. You can terminate any specific script by typing

where [pid] is the process ID of the script you will obtain from the list command. To stop all scripts, you may type

You can use forever to run scripts continuously

During development, I recommend using nodemon. It will restart your server whenever a file changes. As others have pointed out, Forever is an option but in production, it all depends on the platform you are using. You will typically want to use the operating system's recommended way of keeping services up (e.g. http://www.freedesktop.org/wiki/Software/systemd/).

then press enter you will see this line

Here's an upstart solution I've been using for my personal projects:

I’ve found forever to do the job perfectly fine.

Assuming you already have npm installed, if not, just do

No need to install any other package.

server.js is your server file or it can be api.js

After that hit "exit" to close terminal

Another way is creating a system unit for your app. create a "XXX.service" file in "/etc/systemd/system" folder, similar to this:

A benefit is the app will run as a service, it automatically restarts if it crashed.

You can also use sytemctl to manage it:

At the command line, install forever:

You can edit the file and get results directly in your browser.
You can use filezilla or any editor to edit the file. Run this command to run the file: 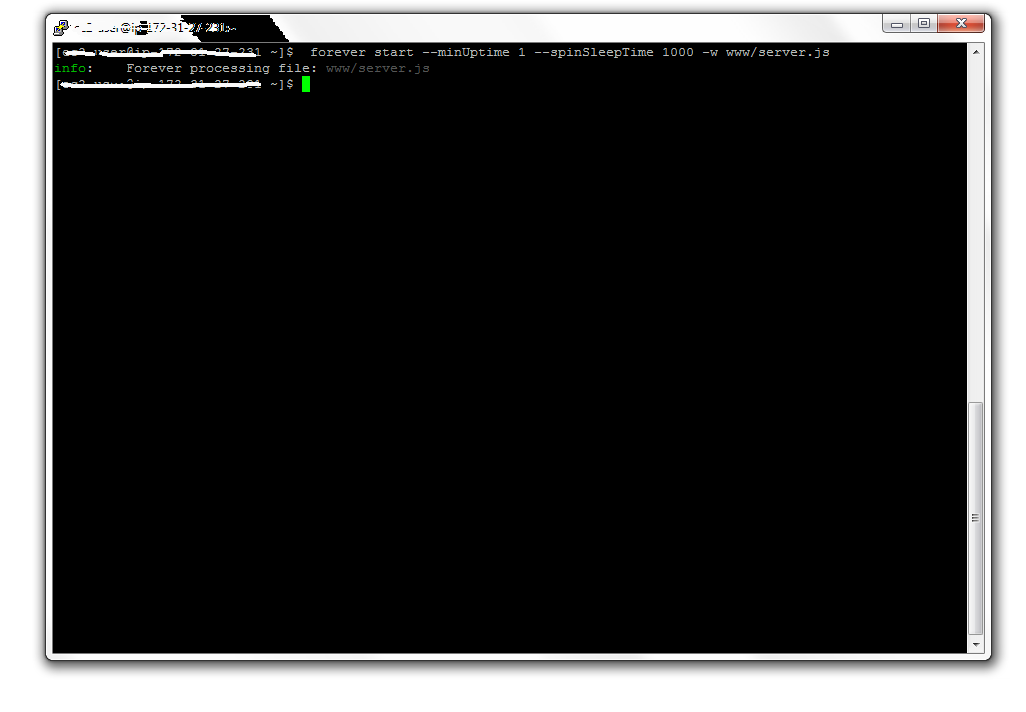 forever package worked for me, just one thing, it depends on deep-equal, so if you had issue with installing it like:

As we know that there are many options to do this. Here is a pure Shell solution, with no need for extra programs / packages.

This solution will restart server.js if it crashes for some reason / errors.

Let's say this is a run.sh:

Make sure to make the run.sh file executable:

And to run it:

If you want to run it in the background:

Run in the background super-silently (detached, without any output):

I recommend use PM2, which is a process manager for Node.js applications. PM2 provides an easy way to manage and daemonize applications (run them as a service).

-1
Permanently running my node application
0
Node JS: Running server all the time
0
How do I keep my Node app running as a daemon?
635
How do I run a node.js app as a background service?
690
Node.js on multi-core machines
199
Automatically start forever (node) on system restart
2
How to start a NodeJS process on a remote server?
3
Running a React app as a background process
0
Can Node.js server only exist in the cmd window? And everything will be gone when cmd window is shut?
0
Bot shuts down when putty window is closed
See more linked questions