Javascript: difference between a statement and an expression?

I asked this question earlier, and after thinking about the topic some more, I began to wonder where the seemingly fuzzy boundary between the meanings of the terms "statement" and "expression" lies. Are all statements also expressions? Where do the return values in a REPL console come from? They don't always seem to make any intuitive sense. Of course if you type 1+1, you'll get 2, but other times it isn't as obvious what the logic is.

Given that anything typed into REPL produces some value, does it mean that it can be used in JS source code as both an expression and a standalone statement?

can string of code that could be used for _X_ in the following snippet also be used for _Y_ and vice versa? if(_X_) _Y_

Are all statements also expressions?

This is comes from a recent post by Axel Rauschmayer about this topic: Expressions versus statements in JavaScript

An expression is any valid unit of code that resolves to a value.

As such, anything that can be used as an rvalue is an expression.

The criterion is not whether side effects exist. Expressions can definitely have side effects. E.g. a=2 is an expression as it has a value (2) and also assigns a value to a variable. Which is why you can do things like:

So whether something is an expression or a statement cannot (in the general case) be determined by looking at a textual piece of code out of context; rather it is a property of a node in a syntax tree and can be decided only after the code is (mentally or actually) parsed.

One often quoted effect of that is that function declarations get "hoisted" whereas function expressions do not.

A more subtle effect can also be experimentally observed in deep recursions given that function statements take up space in the execution context whereas function expressions do not. E.g. the below code uses infinite recursion of a function f. Function f in the first case includes a function expression inside it, in the second case it includes the equivalent function declaration:

On my machine I consistently get the following (in node.js):

… which is consistent with the fact that Function Declarations increase the amount of space necessary to hold an execution context and thus eat up stack space a little faster and so slightly decrease the maximum recursion depth.

At its simplest terms, expressions are evaluated to produce a value. On the other hand, statements are executed to make something happen.

Expression produces or evaluates some value.

Statement produces some behavior or does something and it has some side effect also. Based on the side effect, statements can be categorized.

x=5; is a statement and here side effect is assignment or change in x.

setTimeout() - start of timer is the side effect.

Statements are generally separated by semicolon.

x+=6; is the complex expression(group of primary expressions) is doing assignment that is a side effect, so called expression statement.

Expression: a unit of code that resolves to a value, as instance, literals & operators. Examples for expressions:

Statement: a unit of code representing one instruction or more, usually starts with a language reserved keyword and ends, explicitly or implicitly, with a statement terminator. Examples of statements:

Enter code which is ambiguous to you.

If the browser returns undefined after each line of execution, its a statement.

If the browser returns any value other than undefined after each line of execution, its an expression. 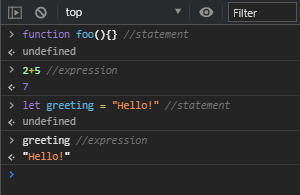 The browser console acts as though it uses console.log(statement) for every line of code entered. Refer this for more info.

This procedure is only to verify.

But its necessary to understand:

But my favorite memory shortcut is:

Expression:
e can be set Equal to an Expression
..orExpressed by printing it.
Statement:
..anything else.

The following is modified from
Anders Kaseorg's Quora answer.

A statement is a complete line of code that performs some action.

Every Expression can be used as a statement
(whose effect is to evaluate the expression, and ignore the resulting value).

But an Expression is any section of the code that evaluates to a value.

Expressions can be combined “horizontally” into larger expressions using operators.
E has a horizontally flat top

Most statements cannot be used as expressions.

Statements can only be combined “vertically” by writing one after another, or with block constructs.
S runs vertically in comparison.

Here’s a general rule of thumb: If you can print it, or assign it to a variable, it’s an expression. If you can’t, it’s a statement.

Here are some examples of expressions:

All of the above can be printed or assigned to a variable.

Here are some examples of statements:

None of the above constructs can be assigned to a variable. They are syntactic elements that serve a purpose, but do not themselves have any intrinsic “value”. In other words, these constructs don’t “evaluate” to anything. Trying to do any of the following, for example, would be absurd, and simply wouldn’t work:

In short, expression is value, statement is behavior.

Let me just show you some naive examples.

The following code define a value. It is a statement called let statement led by let keyword. Here 1 is an expression.

And this is for statement led by for keyword. It comes with some nested expressions and statements.

So a statement is an instruction unit telling computer what to DO. for statement, while statement, if statement, they are all actions, in another word tasks, or behaviors.

But for expression, we are talking about values, valuables, objects, or some procedures that can produce a value, like function.

So Javascript also has function expression. Because function is a value. In the following code,

We have the following two types of expressions:

1. Boolean expression is uses to execute block of statements.

2. Arithmetic expression is uses for variable assignments, which acts as a statements too.

The simplest kind of statement is an expression with a semicolon after it. This is a program:

1; !false; It is a useless program, though. An expression can be content to just produce a value, which can then be used by the enclosing code. A statement stands on its own, so it amounts to something only if it affects the world.

Statement could have side effects.

Not the answer you're looking for? Browse other questions tagged javascript expression terminology semantics or ask your own question.

632
What is the purpose of wrapping whole Javascript files in anonymous functions like “(function(){ … })()”?
87
What is the 'Execution Context' in JavaScript exactly?
54
Why does console.log say undefined, and then the correct value?
8
Is <boolean expression> && statement() the same as if(<boolean expression>) statement()?
0
Should I follow Visual Studio Code suggesting a convert to named function in javascript?
3
How can I push the state to an array with specific items?
1
Why does this `do`–`while` loop repeat the last value after the end?
2
code works but gives: Expected an assignment or function call
0
Using a Javascript function that accepts a byte array using GraalVM and Java
0
Expressions and Arguments in Javascript
See more linked questions