Function in JavaScript that can be called only once

I need to create a function which can be executed only once, in each time after the first it won't be executed. I know from C++ and Java about static variables that can do the work but I would like to know if there is a more elegant way to do this?

If by "won't be executed" you mean "will do nothing when called more than once", you can create a closure:

In answer to a comment by @Vladloffe (now deleted): With a global variable, other code could reset the value of the "executed" flag (whatever name you pick for it). With a closure, other code has no way to do that, either accidentally or deliberately.

However, if you aren't using such a third-party library, but still want such a utility function (rather than the nonce solution I offered above), it's easy enough to implement. The nicest version I've seen is this one posted by David Walsh:

I would be inclined to change fn = null; to fn = context = null;. There's no reason for the closure to maintain a reference to context once fn has been called.

[*] Be aware, though, that other libraries, such as this Drupal extension to jQuery, may have a function named once() that does something quite different.

Replace it with a reusable NOOP (no operation) function.

Point to an empty function once it has been called:

Talking about static variables, this is a little bit like closure variant:

You could then reset a function if you wish:

You could simply have the function "remove itself"

But this may not be the best answer if you don't want to be swallowing errors.

I need it to work like smart pointer, if there no elements from type A it can be executed, if there is one or more A elements the function can't be executed.

From some dude named Crockford... :)

Try it on JSBin: https://jsbin.com/vicipar/edit?js,console

Variation of answer from Bunyk

Here is an example JSFiddle - http://jsfiddle.net/6yL6t/

And it will run only once :)

If your using Node.js or writing JavaScript with browserify, consider the "once" npm module:

If you want to be able to reuse the function in the future then this works well based on ed Hopp's code above (I realize that the original question didn't call for this extra feature!):

simple decorator that easy to write when you need

Trying to use underscore "once" function:

If you're using Ramda, you can use the function "once".

Accepts a function fn and returns a function that guards invocation of fn such that fn can only ever be called once, no matter how many times the returned function is invoked. The first value calculated is returned in subsequent invocations.

keep it as simple as possible

You can see the result 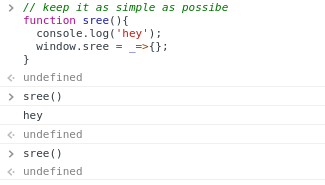 JQuery allows to call the function only once using the method one():

Tossing my hat in the ring for fun, added advantage of memoizing

A simple example for turning on light only once.

This happens due to closure in JavaScript.

This one is useful for preventing infinite loops (using jQuery):

If you're worried about namespace pollution, subsitute a long, random string for "doIt".

It helps to prevent sticky execution

Not the answer you're looking for? Browse other questions tagged javascript function design-patterns or ask your own question.

3186
How can I check for an empty/undefined/null string in JavaScript?
2963
How can I change an element's class with JavaScript?
2862
How can I convert a string to boolean in JavaScript?
2597
How do I modify the URL without reloading the page?
2479
Set a default parameter value for a JavaScript function
1681
Detecting an “invalid date” Date instance in JavaScript
3073
event.preventDefault() vs. return false
2069
How to print a number with commas as thousands separators in JavaScript
1303
From an array of objects, extract value of a property as array