I have a strange space character in a String

I have a Java method that looks for a word inside a phrase, and if it finds the word then it removes it from the phrase. The word and the phrase can be anything. They're variant. Here is my code :

The problem I have is that there is a phrase passed to this method :

The ancient Roman Empire was so vast, so mighty and so ambitious that it had a powerful effect on nearly everything that it touched. Romeâ€™s influence was so widespread that even today, the languages, cultures, laws and governments of most Western nations still bear Romeâ€™s mark.

And the word to find and remove from the text is "Roman Empire", but it couldn't delete it. After some investigation I found this was because the spaces in the phrase were not normal spaces. When I copied the phrase's text in Notepad++ and searched for the same word, I couldn't find it too !

See the attached screenshot. Line 5 is a line I wrote manually and as you see Notepad++ was able to find it, but it couldn't find the "Roman Empire" in Line 1. When I counted "Roman Empire" in the file it only found it once !

What's that other strange space ?! 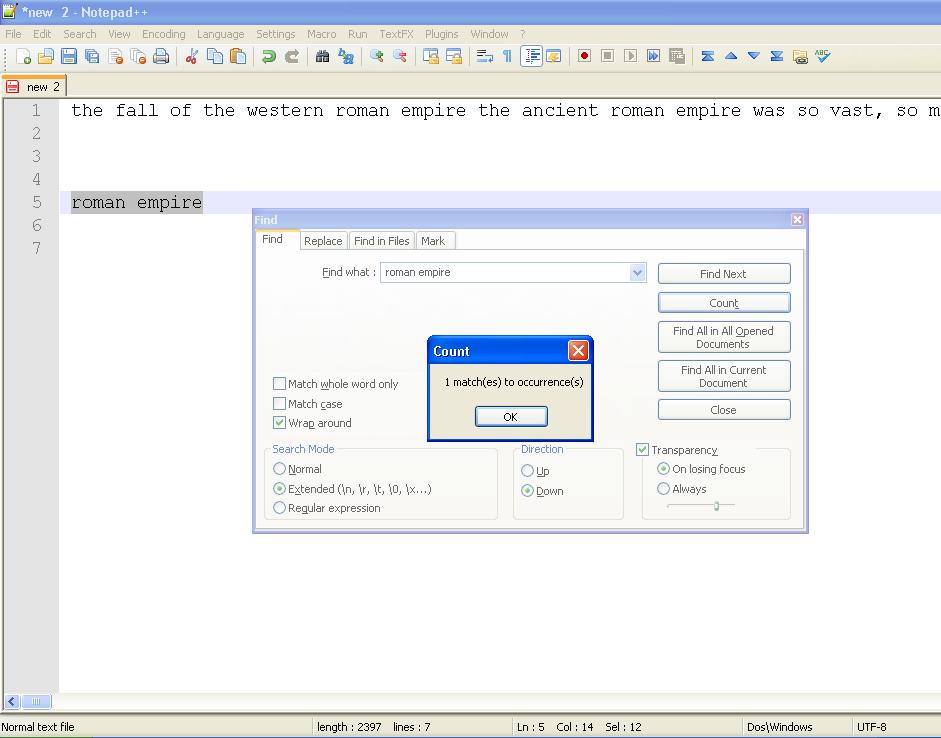 I wrote this code in Java to check the difference between the 2 spaces :

The strange thing is that the 2 spaces look the same exactly !

Probably a non breaking space. You can look explicitly for them or replace your search string spaces by \s (aka [:space:]).

Not the answer you're looking for? Browse other questions tagged java whitespace or ask your own question.

1917
How to generate a random alpha-numeric string
4552
How do I read / convert an InputStream into a String in Java?
2272
How to get an enum value from a string value in Java
1612
Why does Java have transient fields?
864
Make Vim show ALL white spaces as a character
457
How to capitalize the first character of each word in a string
1863
How do I split a string in Java?
3392
How do I convert a String to an int in Java?
7383
Why is subtracting these two times (in 1927) giving a strange result?
3736
Why is char[] preferred over String for passwords?