Cost of push vs. mov (stack vs. near memory), and the overhead of function calls

For example, I could choose to do some work within the stack, or I could do work directly with a labelled location in memory.

It is common in C to discourage trivial functions that take parameters.

I've always thought that is because not only must the parameters get pushed onto the stack and then popped off the stack once the function returns, but also because the function call itself must preserve the CPU's context, which means more stack usage.

(Edit: Clarification: near used above is as opposed to far in the segmented memory model of 16-bit x86 architecture.)
c assembly x86 stack processing-efficiency
Share
Improve this question
edited Oct 7 '12 at 9:46
Assad Ebrahim
asked Oct 7 '12 at 6:08

Nowadays your C compiler can outsmart you. It may inline simple functions and if it does that, there will be no function call or return and, perhaps, there will be no additional stack manipulations related to passing and accessing formal function parameters (or an equivalent operation when the function is inlined but the available registers are exhausted) if everything can be done in registers or, better yet, if the result is a constant value and the compiler can see that and take advantage of it.

Function calls themselves can be relatively cheap (but not necessarily zero-cost) on modern CPUs, if they're repeated and if there's a separate instruction cache and various predicting mechanisms, helping with efficient code execution.

Other than that, I'd expect the performance implications of the choice "local var vs global var" to depend on the memory usage patterns. If there's a memory cache in the CPU, the stack is likely to be in that cache, unless you allocate and deallocate large arrays or structures on it or have deep function calls or deep recursion, causing cache misses. If the global variable of interest is accessed often or if its neighbors are accessed often, I'd expect that variable to be in the cache most of the time as well. Again, if you're accessing large spans of memory that can't fit into the cache, you'll have cache misses and possibly reduced performance (possibly because there may or may not be a better, cache-friendly way of doing what you want to do).

If the hardware is pretty dumb (no or small caches, no prediction, no instruction reordering, no speculative execution, nothing), clearly you want to reduce the memory pressure and the number of function calls because each and everyone will count.

I'd say there's no definitive answer for all cases because performance depends on:

For those who would like to see specific clock cycles, instruction / latency tables for a variety of modern x86 and x86-64 CPUs are available here (thanks to hirschhornsalz for pointing these out).

You then get, on a Pentium 4 chip: 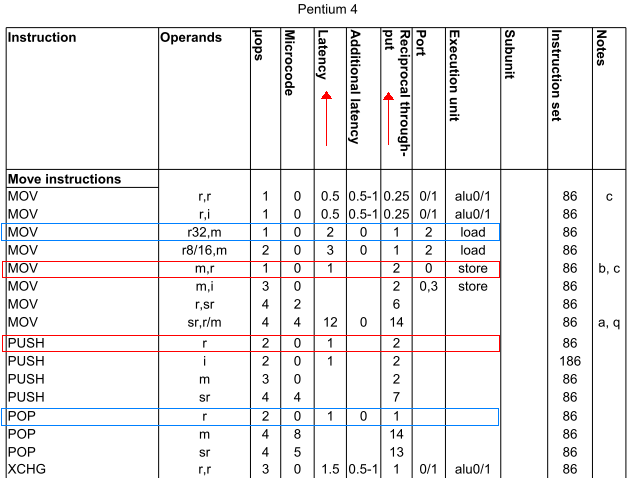 As far as the follow-on question in the comments (3rd comment):

Conclusion: Combine this with Alexey's thorough answer, and there's a pretty solid case for the efficiency of using the stack and letting the compiler decide when a function should be inlined.

(Side note: In fact, even as far back as the 8086 from 1978, using the stack was still not less efficient than corresponding mov's to memory as can be seen from these old 8086 instruction timing tables.)

A bit more may be needed to understand timing tables for modern CPUs. These should help:

Not the answer you're looking for? Browse other questions tagged c assembly x86 stack processing-efficiency or ask your own question.

8486
What and where are the stack and heap?
241
What is exactly the base pointer and stack pointer? To what do they point?
152
What is the difference between MOV and LEA?
0
Single instruction push/pop for user stack instead accessory function calls?
2
Write a function that returns a stack, that contains all elements smaller than a given number, and in same order?
0
stack parameters read from wrong memory address in the stack
2
How is the stack set up in a Windows function call?
0
Stack push and pop in assembly language for x86 processors
4
Do I have to clean the stack when I call the C function “exit” from assembly?
1
Does it matter where the ret instruction is called in a procedure in x86 assembly