I have been attending a lecture on XML where it was written "ISO-8859-1 is a Unicode format". It sounds wrong to me, but as I research on it, I struggle understanding precisely what Unicode is.

Can you call ISO-8859-1 a Unicode format ? What can you actually call Unicode ?

No, ISO 8859-1 is not a Unicode charset, simply because ISO 8859-1 does not provide encoding for all Unicode characters, only a small subset thereof. The word “charset” is sometimes used loosely (and therefore often best avoided), but as a technical term, it means a character encoding.

ISO-8859-1 contains a subset of UTF-8 Unicode, which substantially overlaps with ASCII.

All ASCII is UTF-8 Unicode.

All the ISO 8859-1 (ISO Latin 1) characters below codes 7f hex are ASCII compatible and UTF-8 compatible in one byte. The ligatures and characters with diacritics use multi-byte Unicode UTF-8 representations, and use Unicode compatibility codepoints.

All UTF-8 single-byte character are contained in ASCII. 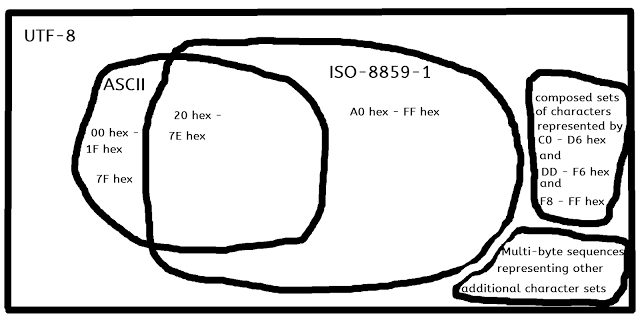 If you look at code formats you have something like

It depends on how you define "Unicode format."

I think most people would take it to mean an encoding capable of representing any codepoint in Unicode's range (U+0000 - U+10FFFF).

However some other definitions might be 'a character set that is a subset of the Unicode character set,' or 'an encoding that can be considered to contain Unicode data (not necessarily arbitrary Unicode data).' ISO 8859-1 meets both of these definitions.

Here you can find a more complete answer: Unicode.org

Not the answer you're looking for? Browse other questions tagged unicode character-encoding iso-8859-1 or ask your own question.

0
Write to File without Encoding

551
Best way to convert text files between character sets?
349
Unicode (UTF-8) reading and writing to files in Python
711
How does Zalgo text work?
437
What is the difference between UTF-8 and ISO-8859-1?
2
IMAP SEARCH CHARSET with ISO-8859-1
1372
Why is executing Java code in comments with certain Unicode characters allowed?
1
Encoding and character set for iso-8859-1