How to make Django serve static files with Gunicorn?

I want to run my django project under gunicorn on localhost. I installed and integrated gunicorn. When I run:

I disabled debug and template_debug in settings.py (made them false), but it is still same. Am I missing something?

When in development mode and when you are using some other server for local development add this to your url.py

When in production you never, ever put gunicorn in front. Instead you use a server like nginx which dispatches requests to a pool of gunicorn workers and also serves the static files.

The WSGI integration option for Django (which involved editing wsgi.py) has been removed. Instead, you should add WhiteNoise to your middleware list in settings.py and remove any reference to WhiteNoise from wsgi.py. See the documentation for more details. (The pure WSGI integration is still available for non-Django apps.)

Heroku recommends this method at: https://devcenter.heroku.com/articles/django-assets:

Your application will now serve static assets directly from Gunicorn in production. This will be perfectly adequate for most applications, but top-tier applications may want to explore using a CDN with Django-Storages.

I've used this for my development environment (which uses gunicorn):

And then run gunicorn myapp.wsgi. This works similar to @rantanplan's answer, however, it does not run any middleware when running static files.

The gunicorn should be used to serve the python "application" itself, while the static files are served by a static file server ( such as Nginx ).

This is an excerpt from one of my configurations:

In closing: while it is possible to serve static files from gunicorn ( by enabling a debug-only static file serving view ), that is considered bad practice in production.

While you're able to use Django to serve static files in development mode with the app django.contrib.staticfiles, that is not suitable for production use.

In order to serve static files, as Jamie Hewland says, normally one routes all the requests to /static/ using Nginx 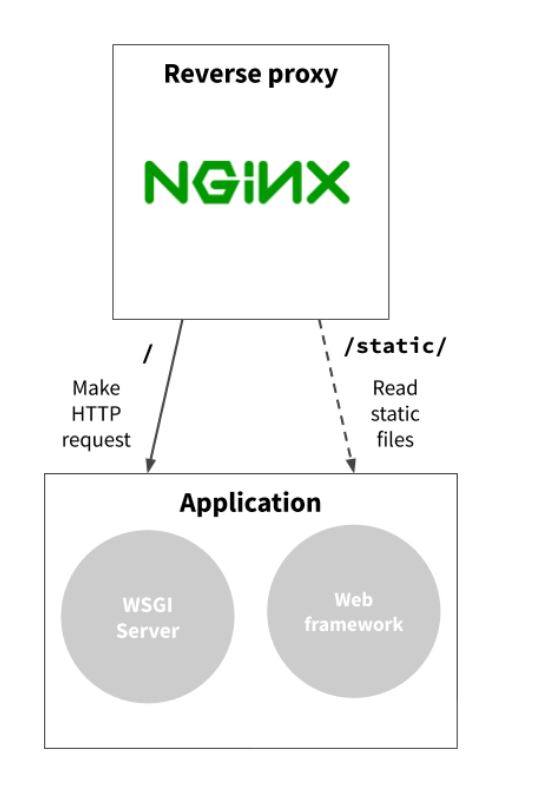 Also, and as coreyward says about Gunicorn / Unicorn

Same line of reasoning applies if you consider other WSGI server like uWSGI instead of Gunicorn. In uWSGI documentation

it’s inefficient to serve static files via uWSGI. Instead, serve them directly from Nginx and completely bypass uWSGI

So, serving static files in production is something to be done by NGINX, not by Django or other WSGI servers.

Another way is to serve your static files in production is using WhiteNoise library which is very easy to setup (you might want to use a CDN so that most requests won't reach the Python app). As Miguel de Matos says, you just have to

Since Django 1.3 there is django/conf/urls/static.py that handle static files in the DEBUG mode:

If you are using Apache/Gunicorn then here is how I set mine up.

3537
How to copy files
3091
How do I make function decorators and chain them together?
5013
How do I make a flat list out of a list of lists?
2625
How to upgrade all Python packages with pip?
261
How to use MySQLdb with Python and Django in OSX 10.6?
3467
How do I list all files of a directory?
482
Why does DEBUG=False setting make my django Static Files Access fail?
548
No module named pkg_resources
772
How to serve static files in Flask