What is the relationship between Looper, Handler and MessageQueue in Android?

I have checked the official Android documentation/guide for Looper, Handler and MessageQueue . But I couldn't get it. I am new to android, and got very confused with these concepts.

A Looper is a message handling loop: it reads and processes items from a MessageQueue. The Looper class is usually used in conjunction with a HandlerThread (a subclass of Thread).

A Handler is a utility class that facilitates interacting with a Looper—mainly by posting messages and Runnable objects to the thread's MessageQueue. When a Handler is created, it is bound to a specific Looper (and associated thread and message queue).

The main thread (a.k.a. UI thread) in an Android application is set up as a handler thread before your application instance is created.

Aside from the class docs, there's a nice discussion of all of this here.

P.S. All the classes mentioned above are in the package android.os.

It's widely known that it's illegal to update UI components directly from threads other than main thread in android. This android document (Handling Expensive Operations in the UI Thread) suggests the steps to follow if we need to start a separate thread to do some expensive work and update UI after it's done. The idea is to create a Handler object associated with main thread, and post a Runnable to it at appropriate time. This Runnable will be invoked on the main thread. This mechanism is implemented with Looper and Handler classes.

The Looper class maintains a MessageQueue, which contains a list messages. An important character of Looper is that it's associated with the thread within which the Looper is created. This association is kept forever and can't be broken nor changed. Also note that a thread can't be associated with more than one Looper. In order to guarantee this association, Looper is stored in thread-local storage, and it can't be created via its constructor directly. The only way to create it is to call prepare static method on Looper. prepare method first examines ThreadLocal of current thread to make sure that there isn't already a Looper associated with the thread. After the examination, a new Looper is created and saved in ThreadLocal. Having prepared the Looper, we can call loop method on it to check for new messages and have Handler to deal with them. 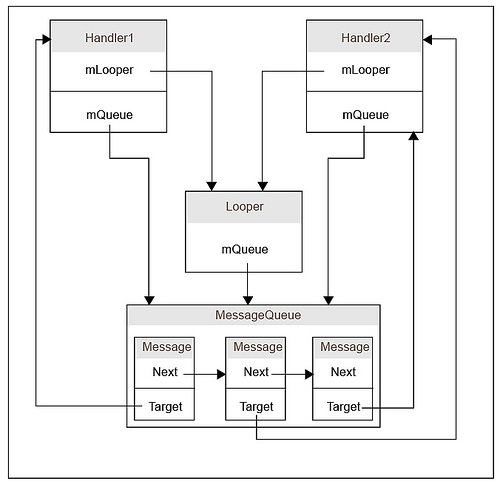 2) Looper provides a queue where jobs to be done are enqueued, which is also needed in GUI framework.

As you may know, when an application is launched, the system creates a thread of execution for the application, called “main”, and Android applications normally run entirely on a single thread by default the “main thread”. But main thread is not some secret, special thread. It's just a normal thread that you can also create with new Thread() code, which means it terminates when its run() method returns! Think of below example.

Now, let's apply this simple principle to Android app. What would happen if an Android app is run on a normal thread? A thread called "main" or "UI" or whatever starts application, and draws all UI. So, the first screen is displayed to users. So what now? The main thread terminates? No, it shouldn’t. It should wait until users do something, right? But how can we achieve this behavior? Well, we can try with Object.wait() or Thread.sleep(). For example, main thread finishes its initial job to display first screen, and sleeps. It awakes, which means interrupted, when a new job to do is fetched. So far so good, but at this moment we need a queue-like data structure to hold multiple jobs. Think about a case when a user touches screen serially, and a task takes longer time to finish. So, we need to have a data structure to hold jobs to be done in first-in-first-out manner. Also, you may imagine, implementing ever-running-and-process-job-when-arrived thread using interrupt is not easy, and leads to complex and often unmaintainable code. We'd rather create a new mechanism for such purpose, and that is what Looper is all about. The official document of Looper class says, "Threads by default do not have a message loop associated with them", and Looper is a class "used to run a message loop for a thread". Now you can understand what it means.

Let's move to Handler and MessageQueue. First, MessageQueue is the queue that I mentioned above. It resides inside a Looper, and that's it. You can check it with Looper class's source code. Looper class has a member variable of MessageQueue.

Then, what is Handler? If there is a queue, then there should be a method that should enable us to enqueue a new task to the queue, right? That is what Handler does. We can enqueue a new task into a queue(MessageQueue) using various post(Runnable r) methods. That's it. This is all about Looper, Handler, and MessageQueue.

My last word is, so basically Looper is a class that is made to address a problem that occurs in GUI framework. But this kind of needs also can happen in other situations as well. Actually it is a pretty famous pattern for multi threads application, and you can learn more about it in "Concurrent Programming in Java" by Doug Lea(Especially, chapter 4.1.4 "Worker Threads" would be helpful). Also, you can imagine this kind of mechanism is not unique in Android framework, but all GUI frameworks may need somewhat similar to this. You can find almost same mechanism in Java Swing framework.

MessageQueue: It is a low-level class holding the list of messages to be dispatched by a Looper. Messages are not added directly to a MessageQueue, but rather through Handler objects associated with the Looper.[3]

Looper: It loops over a MessageQueue which contains the messages to be dispatched. The actual task of managing the queue is done by the Handler which is responsible for handling (adding, removing, dispatching) messages in the message queue.[2]

When you create a new Handler, it is bound to the thread / message queue of the thread that is creating it -- from that point on, it will deliver messages and runnables to that message queue and execute them as they come out of the message queue.

Kindly, go through the below image[2] for better understanding. 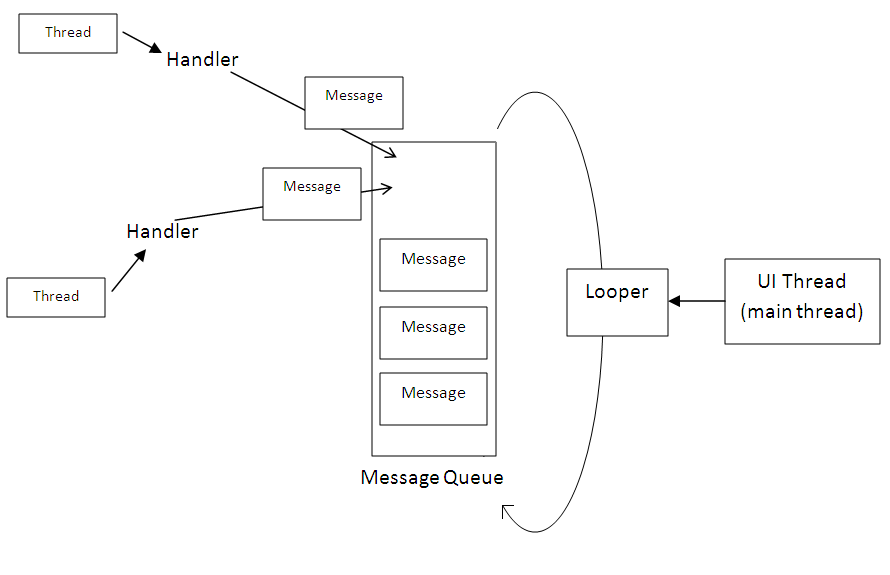 Extending the answer, by @K_Anas, with an example, As it stated

It's widely known that it's illegal to update UI components directly from threads other than main thread in android.

for instance if you try to update the UI using Thread.

your app will crash with exception.

android.view.ViewRoot$CalledFromWrongThreadException: Only the original thread that created a view hierarchy can touch its views.

in other words you need to use Handler which keeps reference to the MainLooper i.e. Main Thread or UI Thread and pass task as Runnable.

Not the answer you're looking for? Browse other questions tagged android handler message-queue looper or ask your own question.

516
What is the purpose of Looper and how to use it?
29
How handler classes work in Android
3
Understanding UI thread
4
Does postDelayed cause the message to jump to the front of the queue?
2
Do we need invoking Looper.prepare() when invoking Handler
0
Android Service :upload image to a http server
0
Message sent to the UI thread never arrives
0
What are looper, handler and other terms related to android threads? How are these classes related?
1
How do Threads, Handler and Loopers Work together?
1
Is there a PostMessage equivalent for use in Java/Android?
See more linked questions