The Windows 8 simulator which comes with Visual Studio 2012 does not launch either via debugging in Visual Studio or by running it directly.

As the simulator used remote desktop (RDP) and the issue occurs within Visual Studio & if I start it directly. I have identified that if my VPN is NOT enabled, then the simulator works fine. Thus I believe the issue is between VPN & RDP.

In the event log for RDP (Application and service logs - Microsoft - Windows - TerminalServices-RDPClient) I see the following message:

RDP ClientActiveX has been disconnected (Reason= 5639)

Reason 5639 is The policy does not support delegation of credentials to the target server.

Are there any policies in group policy that I can change to enable delegation of credentials?

I have also tried turning off the firewall, setting RDP to all users and running the simulator as administrator but none of those options have helped.

The Solution was to set the checkbox Automatically use my Windows logon name and password (and domain, if any) in the VPN security properties, as shown below. 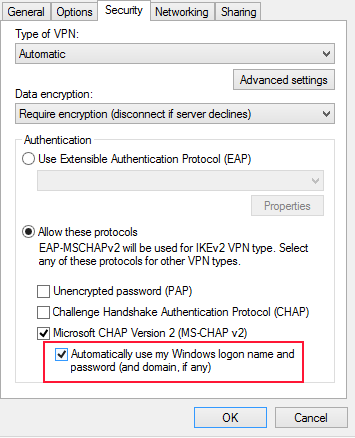 I got same issue, and it's also due to a VPN connection. As my computer is not on the office domain, I cannot check "Automatically use ..." option.

If you have same problem, you just have to disconnect from VPN on first simulator launch, then reconnect and continue to work!

Not the answer you're looking for? Browse other questions tagged windows-8 visual-studio-2012 or ask your own question.

1047
Can you force Visual Studio to always run as an Administrator in Windows 8?
537
Visual Studio debugging/loading very slow
0
WIndows Phone 8 Simulator not showing up
194
Cannot install node modules that require compilation on Windows 7 x64/VS2012
4
Reset VS 2012 Windows Simulator settings
100
Visual Studio 2012 Express is suddenly "incompatible with this version of Windows"?
57
"Unable to launch the IIS Express Web server" error
0
Can I run a Windows 8 app on a Windows Phone
19
Unable to Start Debugging. visual studio 2012 prompt after one time debug
141
Qt 5.1.1: Application failed to start because platform plugin "windows" is missing