Why JScrollPane does not react to mouse wheel events?

I have a JScrollPane containing a panel with a BoxLayout (PAGE AXIS).

I found this thread and i have no MouseMotionListener or MouseWheelListener, only a MouseListener. I think my problem come from the fact that my JScrollPane act on a JPanel that contains other panels itself. So when the mouse is on a panel within the JScrollPane it seems that the event is consumed by this panel i never seen by the scroll pane.

Is there a correct way to make the events caught by the children of the scroll pane visible to this scroll pane? 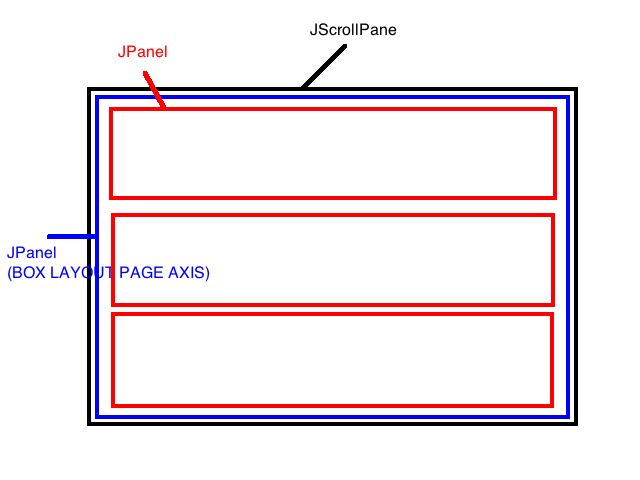 Here a simple test case trying to show when i try to do in my Swing application.

The JTextArea seems to consume the event since when the mouse cursor is inside it, the scrolling using wheel does not work. I have to put the mouse cursor outside the text area to make it works again.

Walter beat me to analysing the issue :-)

Adding a bit of detail:

It's correct that a JScrollPane supports mouseWheelHandling. According to the rules of mouseEvent dispatching, the top-most (in z-order) component gets the event, and that's the scrollPane around the textArea. So if wheeling the textarea is not required, a simple solution might be to disable the wheel-support in its scrollPane. And JScrollPane even has api for doing it:

Unfortunately, that doesn't work. Reason it's not working is that this property has no effect in the event dispatch chain which ultimately calls into eventTypeEnabled:

This returns true if a mouseWheelListener is installed - which is done unconditionally by BasicScrollPaneUI, and not removed when the wheelEnabled property is changed (the ui doesn't even listen to that property ...) Plus the listener simply does nothing if the property is false. At least one of those facts is a bug, the ui should

The first option can be handled by application code:

it's a bit of a hack (as bug-workarounds always are :-), production code would have to listen to the wheelEnable to re-install if needed plus listen to LAF changes to update/re-remove the listeners installed by the ui.

Implementing the second option in slight modification (as to Walter's dispatching) by subclassing the JScrollPane and dispatch the event to parent if the wheelEnabled is false:

The mouse wheel event gets consumed by the scroll pane around the text area. You can try to manually pass the event to the parent scroll pane like this:

Not the answer you're looking for? Browse other questions tagged swing events mouseevent jscrollpane or ask your own question.

5
JTextPane prevents scrolling in the parent JScrollPane
12
Horizontal Scrolling Listener
2
Scrolling Through a JPanel When Mouse is Hovering Over JTable
3
Java : Scroll Over JScrollPane
1
JScrollPane mouse-wheel area
0
How disable mouse wheel scroll on all component except parent
0
Autoscroll not working when used scrollwheel
1
Dynamically adding JTables to JScrollPane

6
Swing won't trigger mouseEntered/mouseExited properly after mouse wheel events?
339
How to get the mouse position without events (without moving the mouse)?
2
JScrollPane adding JPanels at the top and keeping current scroll view
1
problem in setting scrollpane for canvas
3
ScrollBar movement not smooth in JScrollpane in Swing
10
JScrollPane - Zoom relative to mouse position
1
How to scroll with wheel while dragging in JTable and JScrollPane
0
Custom Scrollbar in JScrollpane//Java Swing
0
Switch between panels using a button inside one of them