Where is the IIS Express configuration / metabase file found?

Where can the IIS Express configuration / metabase file be found?

The configuration file is called applicationhost.config. It's stored here:

usually, but not always, one of these paths will work

For VS 2015 & VS 2017: Right-click the IIS Express system tray icon (when running the application), and select "Show all applications":

Then, select the relevant application and click the applicationhost.config file path: 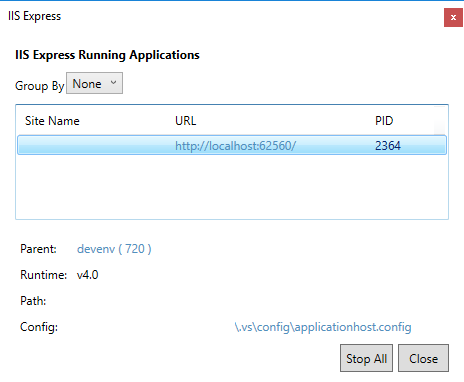 Since the introduction of Visual Studio 2015, this location has changed and is added into your solution root under the following location:

I hope this saves you some time!

To come full circle and include all versions of Visual Studio, @Myster originally stated that;

Pre Visual Studio 2015 the paths to applicationhost.config were:

But the part that might get some people is that the project settings in the .sln file can repopulate the applicationhost.config for Visual Studio 2015+. (credit: @Lex Li)

So, if you make a change in the applicationhost.config you also have to make sure your changes match here:

What is important here is that the two settings in the .sln must match the name and bindingInformation respectively in the applicationhost.config file if you plan on making changes. There may be more places that link these two files and I will update as I find more links either by comments or more experience.

I think all the answers here are relevant however if, like me, you are looking for where Visual Studio takes the template from when it creates a new version of the applicationHost.config then you can look here:

This happens a lot if you are often working on multiple branches of the same project and pressing 'debug' in a lot of them. Making an edit here will ensure that edit propagates to any new project/solution folders that get created.

Answer indirectly came from this answer

Hope this helps as I wasn't able to find the .vs folder location as mentioned in the above suggestions.

Not the answer you're looking for? Browse other questions tagged visual-studio iis-express or ask your own question.

1806
Command to collapse all sections of code?
1911
How do I remedy "The breakpoint will not currently be hit. No symbols have been loaded for this document." warning?
522
How to enable external request in IIS Express?
321
Using Custom Domains With IIS Express
250
IIS Express Windows Authentication
132
Creating virtual directories in IIS express
180
Add MIME mapping in web.config for IIS Express
553
Visual Studio debugging/loading very slow
340
Unable to launch the IIS Express Web server
1094
Error message "No exports were found that match the constraint contract name"