How to understand Locality Sensitive Hashing?

I noticed that LSH seems a good way to find similar items with high-dimension properties.

After reading the paper http://www.slaney.org/malcolm/yahoo/Slaney2008-LSHTutorial.pdf, I'm still confused with those formulas.

Does anyone know a blog or article that explains that the easy way?

The best tutorial I have seen for LSH is in the book: Mining of Massive Datasets. Check Chapter 3 - Finding Similar Items http://infolab.stanford.edu/~ullman/mmds/ch3a.pdf

Also I recommend the below slide: http://www.cs.jhu.edu/%7Evandurme/papers/VanDurmeLallACL10-slides.pdf . The example in the slide helps me a lot in understanding the hashing for cosine similarity.

I borrow two slides from Benjamin Van Durme & Ashwin Lall, ACL2010 and try to explain the intuitions of LSH Families for Cosine Distance a bit. 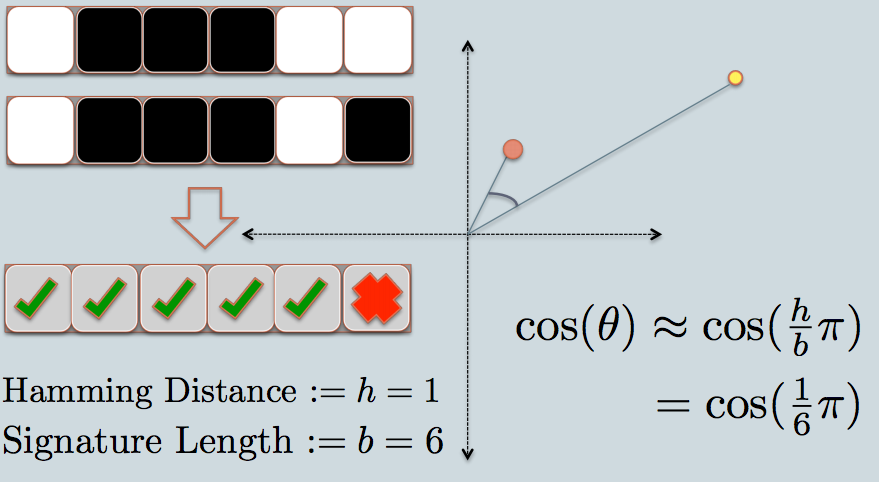 Tweets in vector space can be a great example of high dimensional data.

Check out my blog post on applying Locality Sensitive Hashing to tweets to find similar ones.

And because one picture is a thousand words check the picture below: 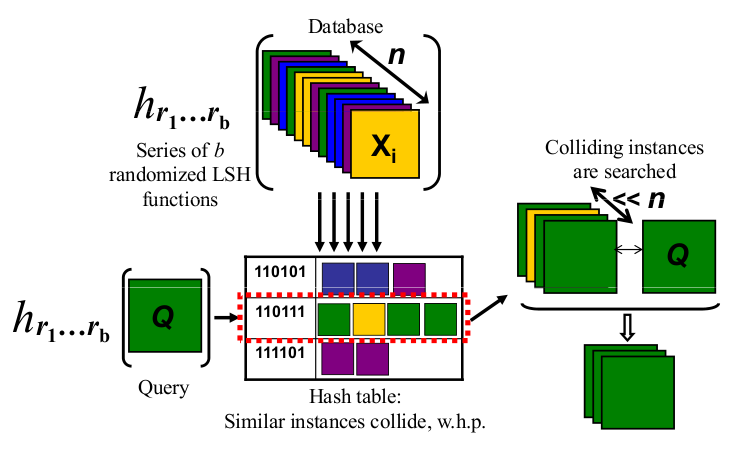 Here's a presentation from Stanford that explains it. It made a big difference for me. Part two is more about LSH, but part one covers it as well.

A picture of the overview (There are much more in the slides): 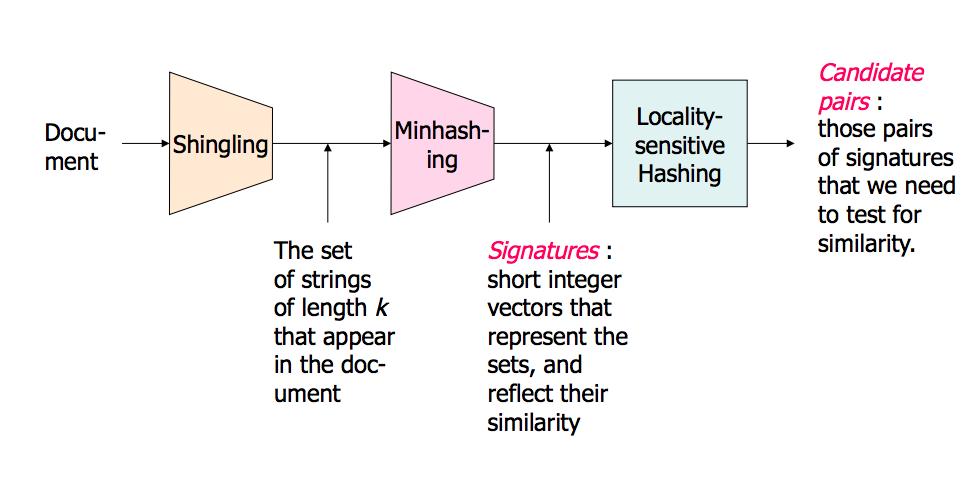 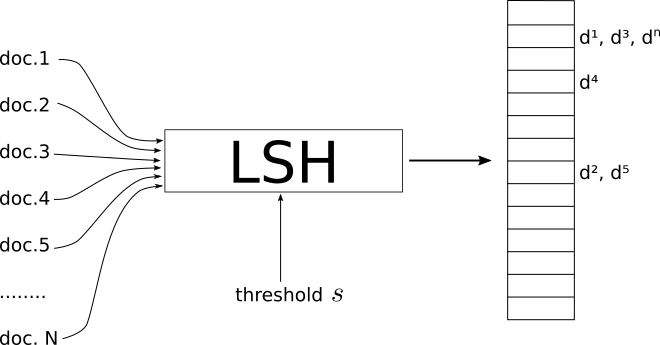 It is important to underline that different similarity measures have different implementations of LSH.

In my blog, I tried to thoroughly explain LSH for the cases of minHashing( jaccard similarity measure) and simHashing (cosine distance measure). I hope you find it useful: https://aerodatablog.wordpress.com/2017/11/29/locality-sensitive-hashing-lsh/

I am a visual person. Here is what works for me as an intuition.

Say each of the things you want to search for approximately are physical objects such as an apple, a cube, a chair.

Eventually, there are many more than three dimensions in a search problem (where each word in a text could be one dimension) but the shadow analogy is still very useful to me.

Now we can efficiently compare strings of bits in software. A fixed length bit string is kinda, more or less, like a line in a single dimension.

So with an LSH, I project the shadows of objects eventually as points (0 or 1) on a single fixed length line/bit string.

The whole trick is to take the shadows such that they still make sense in the lower dimension e.g. they resemble the original object in a good enough way that can be recognized.

A 2D drawing of a cube in perspective tells me this is a cube. But I cannot distinguish easily a 2D square from a 3D cube shadow without perspective: they both looks like a square to me.

How I present my object to the light will determine if I get a good recognizable shadow or not. So I think of a "good" LSH as the one that will turn my objects in front of a light such that their shadow is best recognizable as representing my object.

So to recap: I think of things to index with an LSH as physical objects like a cube, a table, or chair, and I project their shadows in 2D and eventually along a line (a bit string). And a "good" LSH "function" is how I present my objects in front of a light to get an approximately distinguishable shape in the 2D flatland and later my bit string.

Finally when I want to search if an object I have is similar to some objects that I indexed, I take the shadows of this "query" object using the same way to present my object in front of the light (eventually ending up with a bit string too). And now I can compare how similar is that bit string with all my other indexed bit strings which is a proxy for searching for my whole objects if I found a good and recognizable way to present my objects to my light.

As a very short, tldr answer:

An example of locality sensitive hashing could be to first set planes randomly (with a rotation and offset) in your space of inputs to hash, and then to drop your points to hash in the space, and for each plane you measure if the point is above or below it (e.g.: 0 or 1), and the answer is the hash. So points similar in space will have a similar hash if measured with the cosine distance before or after.

You could read this example using scikit-learn: https://github.com/guillaume-chevalier/SGNN-Self-Governing-Neural-Networks-Projection-Layer

Not the answer you're looking for? Browse other questions tagged c machine-learning hashmap nearest-neighbor locality-sensitive-hash or ask your own question.

2678
How do you set, clear, and toggle a single bit?
1286
How do function pointers in C work?
583
How to remove a key from Hash and get the remaining hash in Ruby/Rails?
8
Two algorithms to find nearest neighbor with Locality-sensitive hashing, which one?
1
Local Sensitive Hashing using a arbitray non euclidean metric
2
Locality Sensitivy Hashing in OpenCV for image processing
2
Search in locality sensitive hashing
0
Bag of Features / Visual Words + Locality Sensitive Hashing
3
approximate nearest neighbor (A1NN) for high dimension spaces