Command not found when using sudo

I have a script called foo.sh in my home folder.

When I navigate to this folder, and enter ./foo.sh, I get

Why does this happen and how I can fix it?

In order to run a script the file must have an executable permission bit set.

In order to fully understand Linux file permissions you can study the documentation for the chmod command. chmod, an abbreviation of change mode, is the command that is used to change the permission settings of a file.

To read the chmod documentation for your local system , run man chmod or info chmod from the command line. Once read and understood you should be able to understand the output of running ...

... which will list the READ, WRITE and EXECUTE permissions for the file owner, the group owner and everyone else who is not the file owner or a member of the group to which the file belongs (that last permission group is sometimes referred to as "world" or "other")

Here's a summary of how to troubleshoot the Permission Denied error in your case.

The chmod command fixes that. (Group and other only have read permission set on the file, they cannot write to it or execute it)

foo.sh is now executable as far as Linux is concerned.

When you run a command using sudo you are effectively running it as the superuser or root.

The reason that the root user is not finding your command is likely that the PATH environment variable for root does not include the directory where foo.sh is located. Hence the command is not found.

The PATH environment variable contains a list of directories which are searched for commands. Each user sets their own PATH variable according to their needs. To see what it is set to run

Note that, although similar, in this case the directories contained in the PATH the non-privileged user (rkielty) and the super user are not the same.

The directory where foo.sh resides is not present in the PATH variable of the root user, hence the command not found error.

The other solutions I've seen here so far are based on some system definitions, but it's in fact possible to have sudo use the current PATH (with the env command) and/or the rest of the environment (with the -E option) just by invoking it right:

In fact, one can make an alias out of it:

(It's also possible to name the alias itself sudo, replacing the original sudo.)

Check for secure_path on sudo

If $PATH is being overridden use visudo and edit /etc/sudoers

You can also create a soft link to your script in one of the directories (/usr/local/bin for example) in the super user PATH. It'll then be available to the sudo.

Have a look at this answer to have an idea of which directory to put soft link in.

It seems that linux will say "command not found" even if you explicitly give the path to the file.

It's a somewhat misleading error, however it's probably technically correct. A file is not a command until its executable, and so cannot be found.

Try chmod u+x foo.sh instead of chmod +x foo.sh if you have trouble with the guides above. This worked for me when the other solutions did not.

Regarding "command not found" when using sudo far less hackier way would be to edit secure_path.

It is perfectly described here: https://superuser.com/questions/927512/how-to-set-path-for-sudo-commands

Ok this is my solution: in ~/.bash_aliases just add the following:

Voila! Now you can execute your own scripts with sudo or set as ROOT without having to do an export PATH=$PATH:/home/your_user/bin everytime.

In Ubuntu, right click on the executable file and choose Properties, go to the Permissions tab and highlight Allow executing file as program 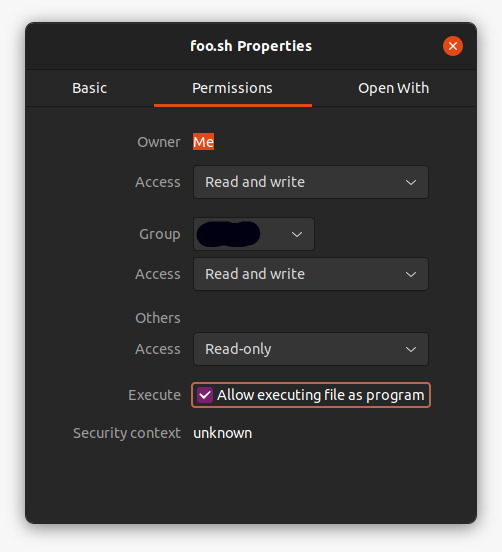 to check whether the sudo package is installed on your system, type sudo , and press Enter . If you have sudo installed the system will display a short help message, otherwise you will see something like sudo: command not found

To install sudo, run one of the following commands using root account:

yum install sudo # If your system based on yum package manager

Not the answer you're looking for? Browse other questions tagged linux bash sudo or ask your own question.

3783
How do I tell if a file does not exist in Bash?
896
How can I exclude all "permission denied" messages from "find"?
663
Command not found error in Bash variable assignment
888
How does "cat << EOF" work in bash?
1636
How does the vim "write with sudo" trick work?
2207
How do I set a variable to the output of a command in Bash?
708
How do I get cURL to not show the progress bar?
1437
How to fix npm throwing error without sudo
888
Set environment variables from file of key/value pairs
418
How to use sudo inside a docker container?