I have tested two writing configurations:

I expected the same result...

But my manual buffering improve performance by a factor of 10 to write a file of 100MB, and the fstream buffering does not change anything compared to the normal situation (without redefining a buffer).

Does someone has an explanation of this situation ? 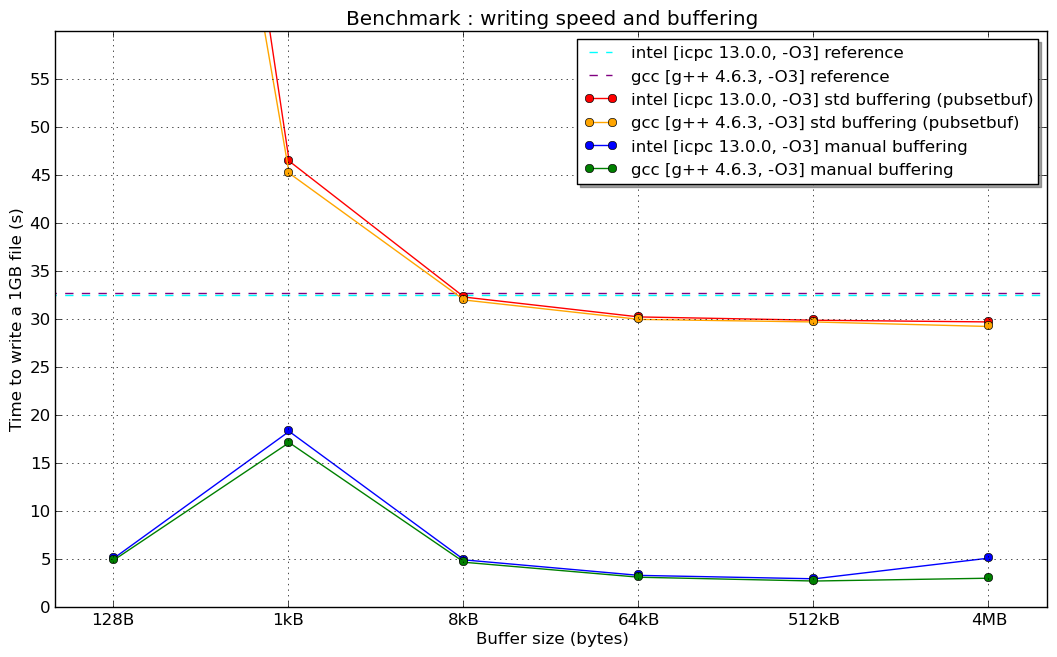 (and I don't explain the reason of the "resonance" for a 1kB manual buffer...) 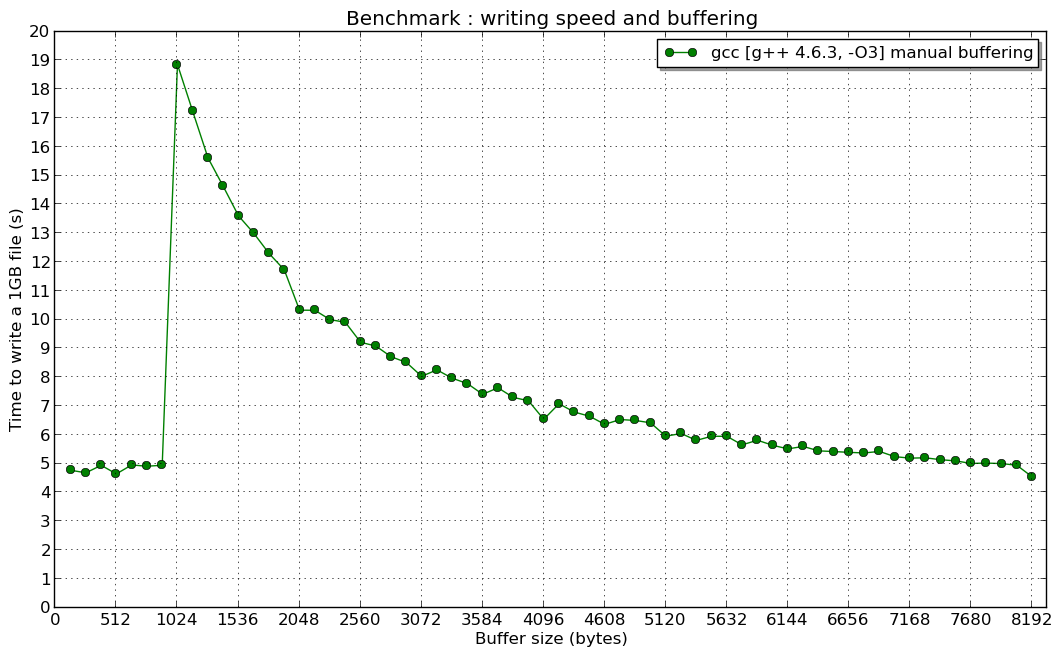 This is basically due to function call overhead and indirection. The ofstream::write() method is inherited from ostream. That function is not inlined in libstdc++, which is the first source of overhead. Then ostream::write() has to call rdbuf()->sputn() to do the actual writing, which is a virtual function call.

If you put the characters into the buffer yourself, you can avoid that overhead.

I would like to explain what is the cause of the peak in the second chart.

In fact, virtual functions used by std::ofstream lead to the performance decreasing as we see on the first picture, but it does not gives an answer why the highest performance was when manual buffer size was less than 1024 bytes.

The problem relates to the high cost of writev() and write() system call and internal implementation of std::filebuf internal class of std::ofstream.

To show the how write() influences on the performance I did a simple test using dd tool on my Linux machine to copy 10MB file with different buffer sizes (bs option):

As you can see that the less buffer is, the less write speed is and the much time dd spends in the system space. So, read/write speed decreases when buffer size decreases.

But why the highest speed was when manual buffer size was less than 1024 bytes in the topic creator manual buffer tests? Why it was almost constant?

The explanation relates to the std::ofstream implementation, especially to the std::basic_filebuf.

By default it uses 1024 bytes buffer (BUFSIZ variable). So, when you write your data using pieces less than 1024, writev() (not write()) system call is called at least once for two ofstream::write() operations (pieces have size of 1023 < 1024 - first is written to the buffer, and second forces writing of first and second). Based on it, we can conclude that ofstream::write() speed does not depend on the manual buffer size before the peak (write() is called at least twice rarely).

When you try writing greater or equal to 1024 bytes buffer at once using ofstream::write() call, writev() system call is called for each ofstream::write. So, you see that speed increases when manual buffer is greater than 1024 (after the peak).

Moreover, if you would like to set std::ofstream buffer greater than 1024 buffer (for example, 8192 bytes buffer) using streambuf::pubsetbuf() and call ostream::write() to write data using pieces of 1024 size, you would be suprised that write speed will be the same as you will use 1024 buffer. It is because implementation of std::basic_filebuf - the internal class of std::ofstream - is hard coded to force calling system writev() call for each ofstream::write() call when passed buffer is greater or equal to 1024 bytes (see basic_filebuf::xsputn() source code). There is also an open issue in the GCC bugzilla which was reported at 2014-11-05.

So, the solution of this problem can be done using two possible cases:

I'd like to add to the existing responses that this performance behavior (all the overhead from the virtual method calls/indirection) is typically not an issue if writing large blocks of data. What seems to have been omitted from the question and these prior answers (although probably implicitly understood) is that the original code was writing a small number of bytes each time. Just to clarify for others: if you are writing large blocks of data (~kB+), there is no reason to expect manually buffering will have a significant performance difference to using std::fstream's buffering.

Not the answer you're looking for? Browse other questions tagged c++ file c++11 buffer fstream or ask your own question.

69
Getting a FILE* from a std::fstream
2857
Why is “using namespace std;” considered bad practice?
3
std::fstream with multiple buffers?
1579
Why does changing 0.1f to 0 slow down performance by 10x?
1
optimization of sequential i/o operations on large file sizes
0
filestream reading hexadecimal file into binary buffer
2
How can I take the address of a temporary/rvalue for copying?
1
Buffer Overrun - Can't seem to locate the porblem
0
Read binary file into unsigned char vector buffer