I am new to message brokers like RabbitMQ which we can use to create tasks / message queues for a scheduling system like Celery.

Now, here is the question:

Now, I believe scaling cannot be the answer since our database like PostgreSQL can work in a distributed environment.

I googled for what problems does the database poses for the particular problem, and I found:

Now, how does RabbitMQ or any other message broker like that solves these problems?

Also, I found out that AMQP protocol is what it follows. What's great in that?

Can Redis also be used as a message broker? I find it more analogous to Memcached than RabbitMQ.

Please shed some light on this!

Rabbit's queues reside in memory and will therefore be much faster than implementing this in a database. A (good)dedicated message queue should also provide essential queueing related features such as throttling/flow control, and the ability to choose different routing algorithms, to name a couple(rabbit provides these and more). Depending on the size of your project, you may also want the message passing component separate from your database, so that if one component experiences heavy load, it need not hinder the other's operation.

As for the problems you mentioned:

In regards to AMQP, I would say a really cool feature is the "exchange", and the ability for it to route to other exchanges. This gives you more flexibility and enables you to create a wide array of elaborate routing typologies which can come in very handy when scaling. For a good example, see: 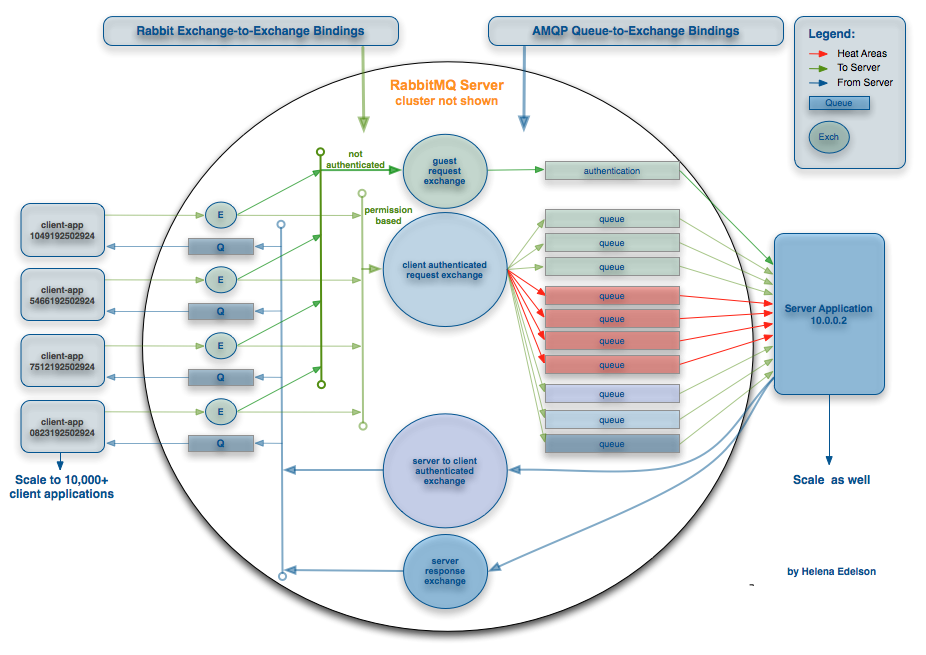 Finally, in regards to redis, yes, it can be used as a message broker, and can do well. However, Rabbitmq has more message queuing features than redis, as rabbitmq was built from the ground up to be a full-featured enterprise-level dedicated message queue. Redis on the other hand was primarily created to be an in-memory key-value store(though it does much more than that now; its even referred to as a swiss army knife). Still, I've read/heard many people achieving good results with Redis for smaller sized projects, but haven't heard much about it in larger applications.

Here is an example of redis being used in a long-polling chat implementation: http://eflorenzano.com/blog/2011/02/16/technology-behind-convore/

PostgreSQL 9.5 incorporates SELECT ... FOR UPDATE ... SKIP LOCKED. This makes implementing working queuing systems a lot simpler and easier. You may no longer require an external queueing system since it's now simple to fetch 'n' rows that no other session has locked, and keep them locked until you commit confirmation that the work is done. It even works with two-phase transactions for when external co-ordination is required.

You don't need such tools, but using one may make life easier. Doing queueing in the database looks easy, but you'll discover in practice that high performance, reliable concurrent queuing is really hard to do right in a relational database.

You can get rid of polling in PostgreSQL by using LISTEN and NOTIFY, but that won't solve the problem of reliably handing out entries off the top of the queue to exactly one consumer while preserving highly concurrent operation and not blocking inserts. All the simple and obvious solutions you think will solve that problem actually don't in the real world, and tend to degenerate into less efficient versions of single-worker queue fetching.

If you don't need highly concurrent multi-worker queue fetches then using a single queue table in PostgreSQL is entirely reasonable.

Not the answer you're looking for? Browse other questions tagged postgresql redis rabbitmq message-queue celery or ask your own question.

54
Why do we need to use rabbitmq
4
Message broker vs. database and monitoring
2
Can Lost Update happen in read committed isolation level in PostgreSQL?
0
Table lock in PostgreSQL

719
Creating a copy of a database in PostgreSQL
1006
How can I drop all the tables in a PostgreSQL database?
636
How to drop a PostgreSQL database if there are active connections to it?
53
RabbitMQ - Message order of delivery
0
Celery, RabbitMQ, Redis: Celery message enters exchange, but not queue?
3
Migrate Celery Tasks from Redis to RabbitMQ
4
Celery: Use PostgreSQL instead of RabbitMQ
7
Why does celery needs a message broker?