WebApi's {"message":"an error has occurred"} on IIS7, not in IIS Express

I'm working with ASP.NET MVC 4 WebApi and am having a lot of fun with it running it on my local computer on IIS Express. I've configured IIS Express to serve remote machines too, and so other's in my company are using my computer as our webserver.

After deciding this was a less-than-optimal solution, we decided to put the WebApi on a remote server after installing .NET 4.5. When I use fiddler and sent a POST to a controller on my local machine it returns the correct response, yet when I change the domain to the webserver running IIS7 the same POST returns a cryptic

message. Anyone have any idea what could be going on?

The problem was a missing dependency that wasn't on the server but was on my local machine. In our case, it was a Devart.Data.Linq dll.

To get to that answer, I turned on IIS tracing for 500 errors. That gave a little bit of information, but the really helpful thing was in the web.config setting the <system.web><customErrors mode="Off"/></system.web> This pointed to a missing dynamically-loaded dependency. After adding this dependency and telling it to be copied locally, the server started working.

Use IncludeErrorDetailPolicy instead if CustomErrors doesn't solve it for you (e.g. if you're ASP.NET stack is >2012):

Note: Be careful returning detailed error info can reveal sensitive information to 'hackers'. See Simon's comment on this answer below.

For me CustomErrors didn't really help. It was already set to Off, but I still only got a measly an error has occurred message. I guess the accepted answer is from 3 years ago which is a long time in the web word nowadays. I'm using Web API 2 and ASP.NET 5 (MVC 5) and Microsoft has moved away from an IIS-only strategy, while CustomErrors is old skool IIS ;).

Anyway, I had an issue with products that I didn't have locally. And then found I couldn't see the errors in Chrome's Network tab like I could on my dev machine. In the end, I managed to solve it by installing Chrome on my production server and then browsing to the app there on the server itself (e.g. on 'localhost'). Then more detailed errors appeared with stack traces and all.

Only afterward did I find this article from Jimmy Bogard (Note: Jimmy is mr. AutoMapper!). The funny thing is that his article is also from 2012, but in it, he already explains that CustomErrors doesn't help for this anymore, but that you CAN change the 'Error detail' by setting a different IncludeErrorDetailPolicy in the global WebApi configuration (e.g. WebApiConfig.cs):

Luckily he also explains how to set it up that web API (2) DOES listen to your CustomErrors settings. That's a pretty sensible approach, and this allows you to go back to 2012 :P.

Note: The default value is 'LocalOnly', which explains why I was able to solve the problem the way I described, before finding this post. But I understand that not everybody can just remote to production and startup a browser (I know I mostly couldn't until I decided to go freelance AND DevOps).

None of the other answers worked for me.

This did: (in Startup.cs)

(or you can put it in WebApiConfig.cs):

I always come to this question when I hit an error in the test environment and remember, "I've done this before, but I can do it straight in the web.config without having to modify code and re-deploy to the test environment, but it takes 2 changes... what was it again?"

In case this helps anyone:

I had a similar issue, and following Nates instructions I added:

This showed me more information about the error:

This is when I remembered that I had moved the edmx file to a different location and had forgotten to change the connectionstrings node in the config (connectionsstrings node was placed in a seperate file using "configSource", but that's another story).

I had a similar problem when posting to the WebAPI endpoint. By turning the CustomErrors=Off, i was able to see the actual error which is one of the dlls was missing.

My swagger XML file was not deployed into \bin: 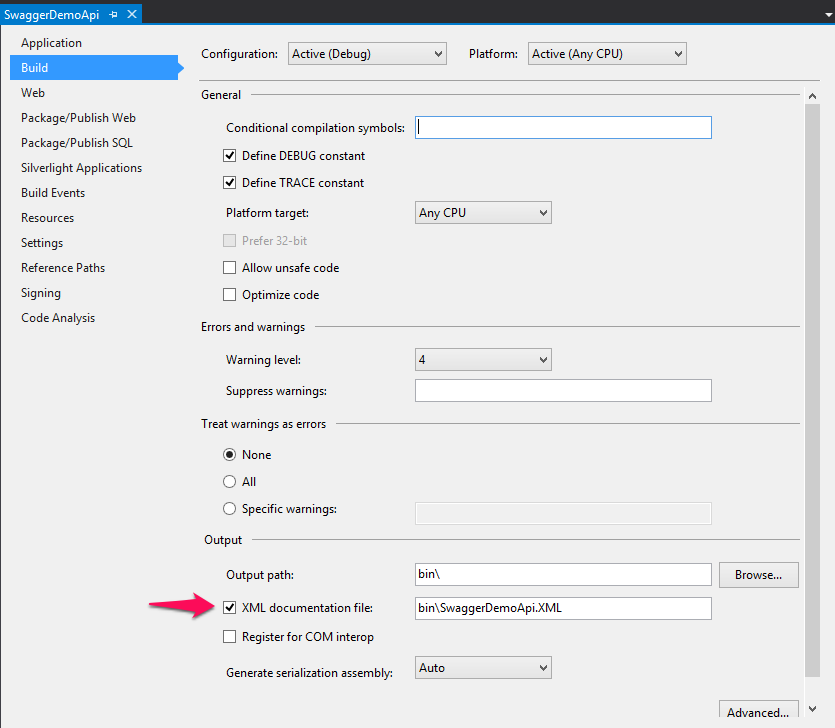 If you have <deployment retail="true"/> in your .NET Framework's machine.config, you won't see detailed error messages. Make sure that setting is false, or not present.

So i tried all the suggested solutions to no avail. All i did was to set run the app from the server and it displayed the error in full, this should have worked when i set customErrors mode to false but it didn't. The moment i browsed the API form the server i was able to see the problem.