After adding the Maven jFree dependency to my existing application, I'm not able to execute the created jar.

The only error message I get is the following:

I don't get any other debug information if I execute the jar.

Is there any option to validate the jarfile? Or having something like java -verbose...?

I started to delete some dependencies to identify the problem. But I haven't got a clear understanding what goes wrong.

Now I figured out (See hint B in the pom.xml) that moving the Apache POI dependencies to the top will solve the problem. But still I don't know how to why and what is the problem.

On my end if I build your project using the pom.xml you've showed us, with apache-poi declared after jfreechart, then as you've mentioned I get a corrupt JAR. Swapping the order of these two dependencies indeed gives me a correct JAR.

I've some previous experience with the maven-shade-plugin and when I used it I had trouble with the created JAR's META-INF directory, so I've checked that for defects.

I've tried to copy (using Total Commander) the META-INF directory somewhere on my local filesystem and what I've noticed is that there were errors while copying the files in META-INF/licences/. If I've tried to copy those somewhere individually and it worked but I couldn't copy the whole thing. My conclusion was that the JAR/ZIP archive is corrupt.

After this. It works.

(I've also tried to repack the whole thing without renaming anything using Cygwin's unzip/zip commands, but that didn't work the new archive was still corrupt. Total Commander or the plugin I've mentioned does some magic.)

I guess the maven-shade-plugin merely creates a corrupt or invalid ZIP/JAR archive. I'm not sure why and maybe what I've described won't work for anyone else but I thought I'd mention it so maybe I could help.

I couldn't just leave this alone, so I've dug deeper and I think I've found the answer.

Guess what's the upper limit of the number of entries for a plain ZIP file? Yeah. The Wiki article speaks about a ZIP64 format which overcomes this limitation.

The good JAR has less entries because the actual dependencies change because of the position of the dependency declarations in your pom.xml. (As described by this answer.)

I was using Java 7 which seems to support the new ZIP64 format, so maybe if someone tries to count the entries in the bad JAR using Java 5 or 6 will receive an error (I'm not sure though).

I also tried to run the JAR exploded. I've unpacked the whole JAR into a directory and run the whole thing like this.

I have a project at work where I build my project like this.

Primarily I've opted to use this solution, because in my project I use some Bouncy Castle JARs which JARs have some extravagant this and that inside their META-INF directory. When I used the maven-shade-plugin to create my final runnable JAR all hell broke loose and I got nasty that method couldn't be found and this signature is not quite right errors.

You should be doing something like this also. This Maven shade business is too shady to be useful (pun intended).

Here's a blog post on the whole process that I've tried to describe just above (thanks to baba), maybe it'll help someone in the future.

I ran mvn dependency:tree with your setup and it will give a difference when you move the org.apache.poi higher up in the dependency declarations.

This is taken from the Introduction to the Dependency Mechanism regarding dependency order:

Dependency mediation - this determines what version of a dependency will be used when multiple versions of an artifact are encountered. Currently, Maven 2.0 only supports using the "nearest definition" which means that it will use the version of the closest dependency to your project in the tree of dependencies. You can always guarantee a version by declaring it explicitly in your project's POM. Note that if two dependency versions are at the same depth in the dependency tree, until Maven 2.0.8 it was not defined which one would win, but since Maven 2.0.9 it's the order in the declaration that counts: the first declaration wins.

There seems to be a conflict in your dependency resolution and that is causing your corrupt jar file (don't know why it gets corrupt).

Anyway, here are the diffs between the two poms (left is origin, right is with org.apache.poi higher up): 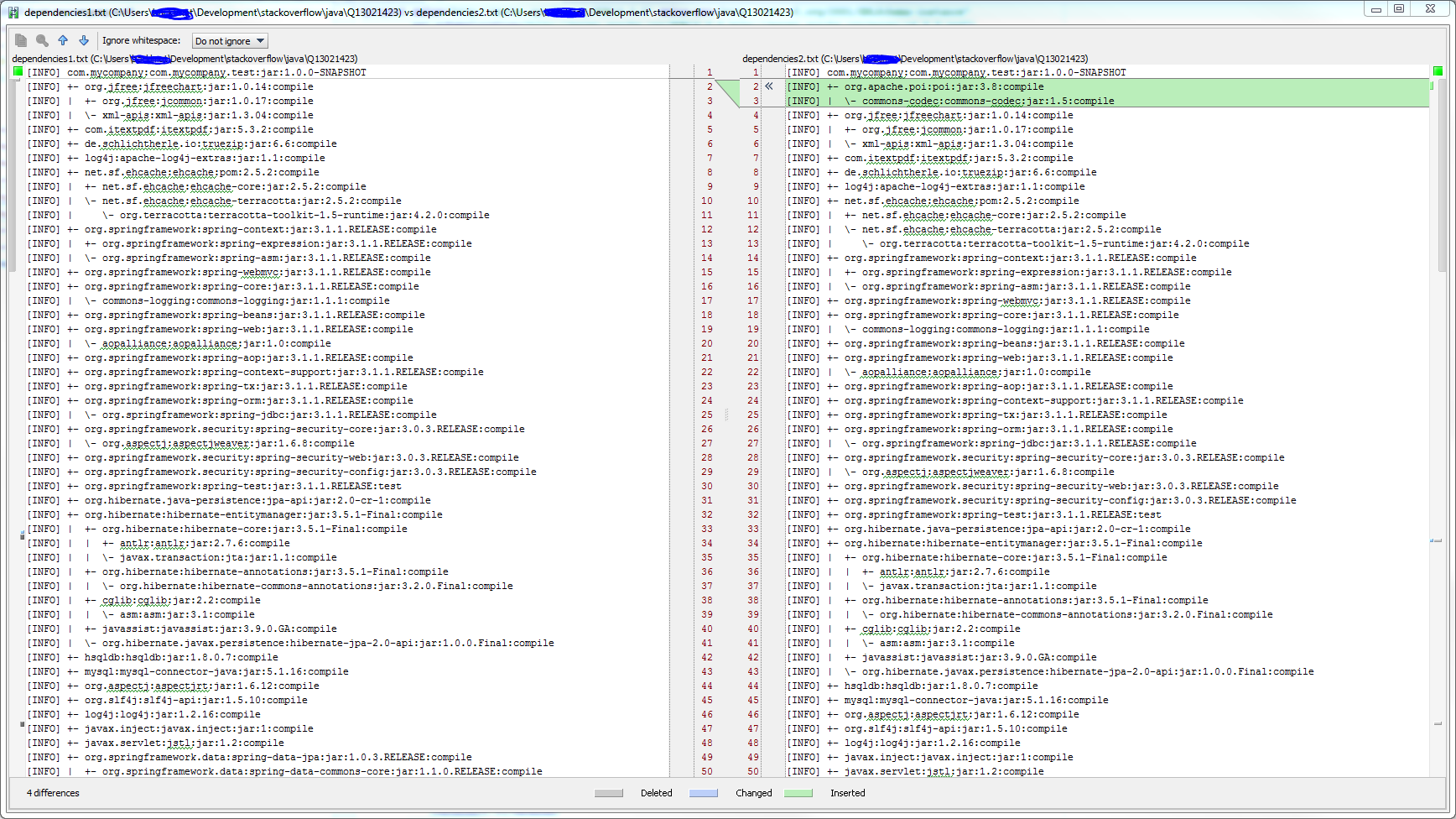 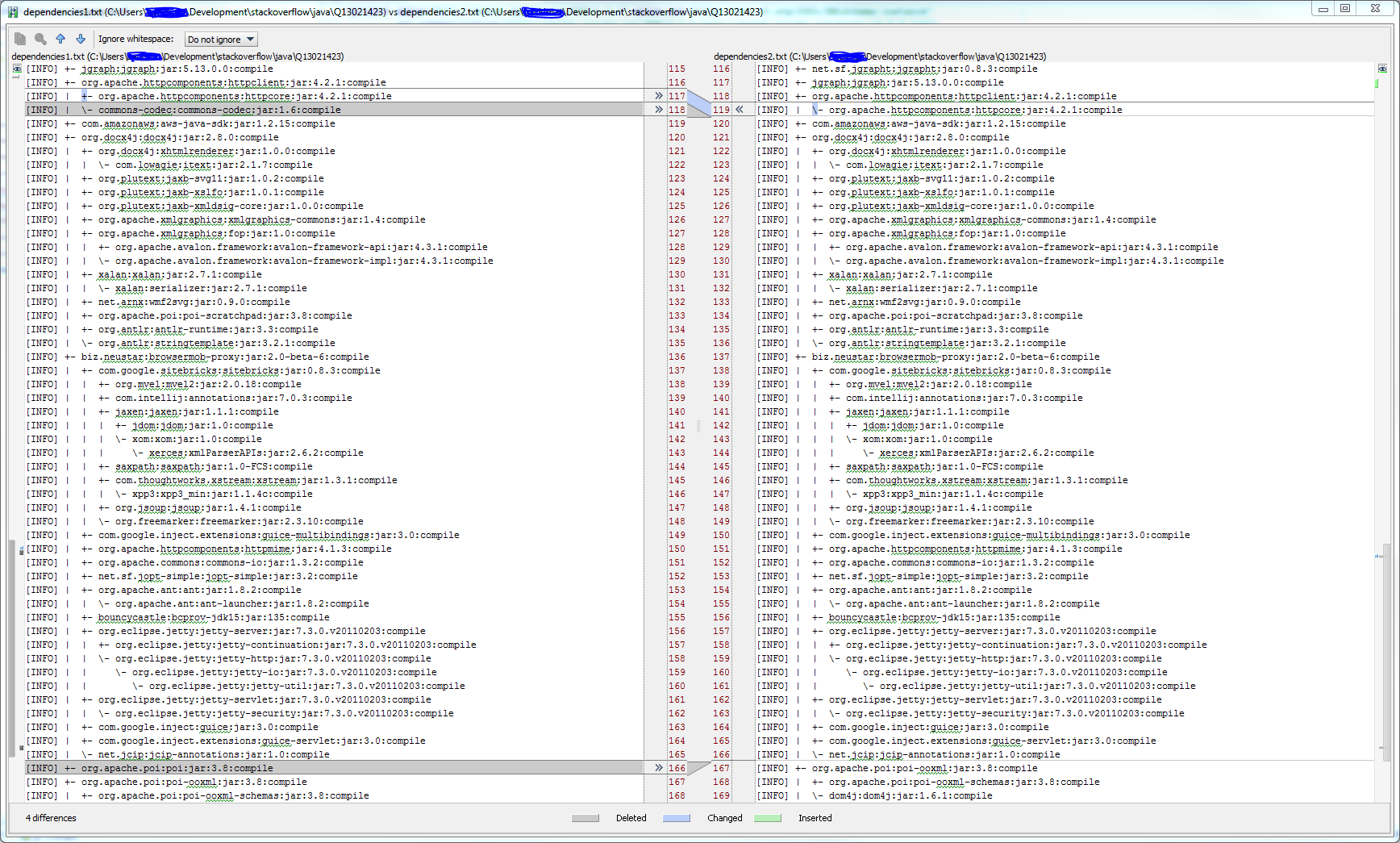 (Maybe it is hard to see at the pictures but if you zoom in you will see.)

I guess that there is a problem with the 1.6 version of commons-codec together with org.apache.poi:poi:jar:3.8 which needs the 1.5 version.

After this excellent answer that explains why the jar file is corrupt (too many entries in the jar) I just want to add a simple solution that at least works for your particular problem.

Add the tag <minimizeJar>true</minimizeJar> to your maven-shade-plugin configuration.

After that your java -jar target/com.mycompany.test-1.0.0-SNAPSHOT.jar command line will work.

Not the answer you're looking for? Browse other questions tagged java maven jfreechart maven-shade-plugin or ask your own question.

2680
How can I create an executable JAR with dependencies using Maven?
482
"Invalid signature file" when attempting to run a .jar
1399
How to add local jar files to a Maven project?
5
Unable to create successfully a project using GWT-maven-plugin with gwt 2.2
964
How to solve "Plugin execution not covered by lifecycle configuration" for Spring Data Maven Builds
1184
Can't execute jar- file: "no main manifest attribute"
320
What is the maven-shade-plugin used for, and why would you want to relocate Java packages?
708
How to add local .jar file dependency to build.gradle file?
1
Multiple jars of same groupId and artifactId in WEB-INF