I want to store many records in a MySQL database. All of them contains money values. But I don't know how many digits will be inserted for each one.
Which data type do I have to use for this purpose?
VARCHAR or INT (or other numeric data types)?

Since money needs an exact representation don't use data types that are only approximate like float. You can use a fixed-point numeric data type for that like

These types are used when it is important to preserve exact precision, for example with monetary data.

You can use DECIMAL or NUMERIC both are same

The DECIMAL and NUMERIC types store exact numeric data values. These types are used when it is important to preserve exact precision, for example with monetary data. In MySQL, NUMERIC is implemented as DECIMAL, so the following remarks about DECIMAL apply equally to NUMERIC. : MySQL 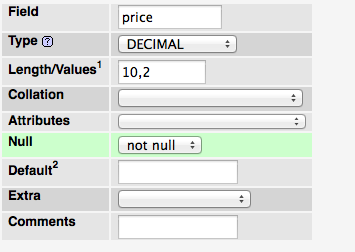 I prefer to use BIGINT, and store the values in by multiply with 100, so that it will become integer.

For e.g., to represent a currency value of 93.49, the value shall be stored as 9349, while displaying the value we can divide by 100 and display. This will occupy less storage space.

Caution:
Mostly we don't perform currency * currency multiplication, in case if we are doing it then divide the result with 100 and store, so that it returns to proper precision.

It depends on your need.

Using DECIMAL(10,2) usually is enough but if you need a little bit more precise values you can set DECIMAL(10,4).

If you work with big values replace 10 with 19.

If your application needs to handle money values up to a trillion then this should work: 13,2 If you need to comply with GAAP (Generally Accepted Accounting Principles) then use: 13,4

Usually you should sum your money values at 13,4 before rounding of the output to 13,2.

Because it can represent any 15 digit number with no constraints on where the decimal point is. All for a measly 8 bytes!

So it can represent:

...and anything in between.

This is useful because we're dealing with global currencies, and double can store the various numbers of decimal places we'll likely encounter.

However, it's not loss of accuracy as some tend to point out. Even though double itself may not be internally exact to the base 10 system, we can make it exact by rounding the value we pull from the database to its significant decimal places. If needed that is. (e.g. If it's going to be outputted, and base 10 representation is required.)

The caveats are, any time we perform arithmetic with it, we need to normalize the result (by rounding it to its significant decimal places) before:

Another kind of caveat is, unlike decimal(m, d) where the database will prevent programs from inserting a number with more than m digits, no such validations exists with double. A program could insert a user inputted value of 20 digits and it'll end up being silently recorded as an inaccurate amount.

At the time this question was asked nobody thought about Bitcoin price. In the case of BTC, it is probably insufficient to use DECIMAL(15,2). If the Bitcoin will rise to $100,000 or more, we will need at least DECIMAL(18,9) to support cryptocurrencies in our apps.

If GAAP Compliance is required or you need 4 decimal places:

Indeed this relies on the programmer's preferences. I personally use: numeric(15,4) to conform to the Generally Accepted Accounting Principles (GAAP).

this usually works with every other DB as well

Storing money as BIGINT multiplied by 100 or more with the reason to use less storage space makes no sense in all "normal" situations.

Multiplies 10000 and stores as BIGINT, like "Currency" in Visual Basic and Office. See https://msdn.microsoft.com/en-us/library/office/gg264338.aspx

There are 2 valid options:

In both cases you should use decimal data type to have enough significant digits. The difference can be in precision:

Source and more caveats and facts.

1
How to handle and/or store money values in web applications?
-2
Creating a table with a money type is giving me this error in sql: ERROR 1064 (42000)
0
Which sql data type is suitable to use for currency
0
Weird zeros behaviour (double) on MariaDB 5.5.60
-2
request and echo a float number from database
223
Best data type for storing currency values in a MySQL database
21
Personal finance app database design
7
how can I stop mysql from rounding float values?
2
Error in JDBC code calling a stored function which returns a value
1
Rounding in mysql doesn't work as expected
See more linked questions

1357
Which MySQL data type to use for storing boolean values
3087
Should I use the datetime or timestamp data type in MySQL?
900
How can I SELECT rows with MAX(Column value), PARTITION by another column in MYSQL?
911
Finding duplicate values in MySQL
498
What is the best data type to use for money in C#?
346
How to best display in Terminal a MySQL SELECT returning too many fields?
896
MySQL: Large VARCHAR vs. TEXT?
355
How do I import CSV file into a MySQL table?
512
Maximum length for MySQL type text