What do the bytes in a .wav file represent?

When I store the data in a .wav file into a byte array, what do these values mean? I've read that they are in two-byte representations, but what exactly is contained in these two-byte values?

You will have heard, that audio signals are represented by some kind of wave. If you have ever seen this wave diagrams with a line going up and down -- that's basically what's inside those files. Take a look at this file picture from http://en.wikipedia.org/wiki/Sampling_rate 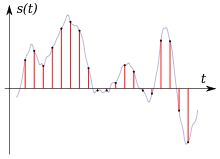 You see your audio wave (the gray line). The current value of that wave is repeatedly measured and given as a number. That's the numbers in those bytes. There are two different things that can be adjusted with this: The number of measurements you take per second (that's the sampling rate, given in Hz -- that's how many per second you grab). The other adjustment is how exact you measure. In the 2-byte case, you take two bytes for one measurement (that's values from -32768 to 32767 normally). So with those numbers given there, you can recreate the original wave (up to a limited quality, of course, but that's always so when storing stuff digitally). And recreating the original wave is what your speaker is trying to do on playback.

To illustrate: If you have data of 8 bytes for two channels and 16-bit number:

If you take together all that information you have, you can calculate the bit rate you have, that's how many bits of information is generated by the recorder per second. In our example, you generate 2 bytes per channel on every sample. With two channels, that would be 4 bytes. You need about 44000 samples per second to represent the sounds a human beeing can normally hear. So you'll end up with 176000 bytes per second, which is 1408000 bits per second.

And of course, it is not 2-bit values, but two 2 byte values there, or you would have a really bad quality.

The first 44 bytes are commonly a standard RIFF header, as described here: http://tiny.systems/software/soundProgrammer/WavFormatDocs.pdf and here: http://www.topherlee.com/software/pcm-tut-wavformat.html

Apple/OSX/macOS/iOS created .wav files might add an 'FLLR' padding chunk to the header and thus increase the size of the initial header RIFF from 44 bytes to 4k bytes (perhaps for better disk or storage block alignment of the raw sample data).

The WAVE (.wav) file contain a header, which indicates the formatting information of the audio file's data. Following the header is the actual audio raw data. You can check their exact meaning below.

I copied all of these from http://www.topherlee.com/software/pcm-tut-wavformat.html here

As others have pointed out, there's metadata in the wav file, but I think your question may be, specifically, what do the bytes (of data, not metadata) mean? If that's true, the bytes represent the value of the signal that was recorded.

What does that mean? Well, if you extract the two bytes (say) that represent each sample (assume a mono recording, meaning only one channel of sound was recorded), then you've got a 16-bit value. In WAV, 16-bit is (always?) signed and little-endian (AIFF, Mac OS's answer to WAV, is big-endian, by the way). So if you take the value of that 16-bit sample and divide it by 2^16 (or 2^15, I guess, if it's signed data), you'll end up with a sample that is normalized to be within the range -1 to 1. Do this for all samples and plot them versus time (and time is determined by how many samples/second is in the recording; e.g. 44.1KHz means 44.1 samples/millisecond, so the first sample value will be plotted at t=0, the 44th at t=1ms, etc) and you've got a signal that roughly represents what was originally recorded.

I suppose your question is "What do the bytes in data block of .wav file represent?" Let us know everything systematically.
Prelude: Let us say we play a 5KHz sine wave using some device and record it in a file called 'sine.wav', and recording is done on a single channel (mono). Now you already know what the header in that file represents. Let us go through some important definitions:

Now coming to the answer of your question:
It is not possible practically to write the whole sine wave to the file because there are infinite points on a sine wave. Instead, we fix a sampling rate and start sampling the wave at those intervals and record the amplitudes. (The sampling rate is chosen such that the signal can be reconstructed with minimal distortion, using the samples we are going to take. The distortion in the reconstructed signal because of the insufficient number of samples is called 'aliasing'.)
To avoid aliasing, the sampling rate is chosen to be more than twice the frequency of our sine wave (5kHz)(This is called 'sampling theorem' and the rate twice the frequency is called 'nyquist rate'). Thus we decide to go with sampling rate of 12kHz which means we will sample our sine wave, 12000 times in one second.
Once we start recording, if we record the signal, which is sine wave of 5kHz frequency, we will have 12000*5 samples(values). We take these 60000 values and put it in an array. Then we create the proper header to reflect our metadata and then we convert these samples, which we have noted in decimal, to their hexadecimal equivalents. These values are then written in the data bytes of our .wav files.

Two bit audio wouldn't sound very good :) Most commonly, they represent sample values as 16-bit signed numbers that represent the audio waveform sampled at a frequency such as 44.1kHz.

Not the answer you're looking for? Browse other questions tagged audio wav or ask your own question.

2
What does the data returned by scipy.io.wavfile.read mean?
1
How to get volume level in current sample? Delphi 7
0
Java - What do the Bytes Recieved by Reading from an AudioInputStream Correspond to?
0
How to get number of Frames(or Samples) per sec or ms in a audio (.wav or .mp3) file?
1
Return type of wavfile.read in python

97
Reading *.wav files in Python
50
Writing musical notes to a wav file
1
Convert Amplitude BACK to .wav file (C#)
0
Why is the data subchunk of some wav files 2 bytes off?
2
Reversing a .wav file
0
Extract WAV file from Bytes Array
1
What does “type=1” mean in a .wav file?