How to terminate script execution when debugging in Google Chrome?

When stepping through JavaScript code in Google Chrome debugger, how do I terminate script execution if I do not want to continue? The only way I found is closing the browser window.

Pressing "Reload this page" runs the rest of the code and even submits forms as if pressing F8 "Continue".

When pressing F5 (Refresh) while a script is paused:

Closing and then opening again the browser window is not always the next easiest way because it will kill browser session state and that may be important. All your breakpoints are also lost.

Navigate to the same page while debugging:

Also juacala suggested an effective workaround. For example, if you are using jQuery, running delete $ from console will stop execution once any jQuery method is encountered. I have tested it in all above browsers and can confirm it is working.

Finally, after over 2 years and almost 10K views, the right answer was given by Alexander K. Google Chrome has its own Task Manager which can kill a tab process without closing the tab itself, keeping all the breakpoints and other stuff intact.

I even went as far as BrowserStack.com to test it in Chrome v22 and found that this was working this way even at that time.

Juacala's workaround is still useful when debugging in IE or Firefox.

Chrome Dev Tools at last added a proper way to stop script execution which is nice (although a bit hidden). Refer to James Gentes's answer for details.

In Chrome, there is "Task Manager", accessible via Shift+ESC or through

You can select your page task and end it by pressing "End Process" button.

As of April 2018, you can stop infinite loops in Chrome: 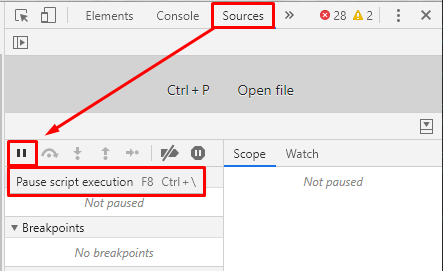 One way you can do it is pause the script, look at what code follows where you are currently stopped, e.g.:

In the console, do the following:

Then play the script: it will cause a fatal error when it tries to access somethingElse, and the script will die. Voila, you've terminated the script.

EDIT: Originally, I deleted a variable. That's not good enough. You have to delete a function or an object of which JavaScript attempts to access a property.

As of Chrome 80, none of the current answers work. There is no visible "Pause" button - you need to long-click the "Play" button to access the Stop icon: 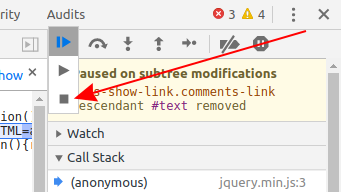 If you are encountering this while using the debugger statement,

... then I think the page will continue running forever until the js runtime yields, or the next break. Assuming you're in break-on-error mode (the pause-icon toggle), you can ensure a break happens by instead doing something like:

or maybe call a non-existent function:

(Of course this doesn't help if you are trying to step through functions, though perhaps you could dynamically add in a throw 1 or z() or somesuch in the Sources panel, ctrl-S to save, and then ctrl-R to refresh... this may however skip one breakpoint, but may work if you're in a loop.)

If you are doing a loop and expect to trigger the debugger statement again, you could just type throw 1 instead.

Then when you hit ctrl-R, the next throw will be hit, and the page will refresh.

Good question here. I think you cannot terminate the script execution. Although I have never looked for it, I have been using the chrome debugger for quite a long time at work. I usually set breakpoints in my javascript code and then I debug the portion of code I'm interested in. When I finish debugging that code, I usually just run the rest of the program or refresh the browser.

If you want to prevent the rest of the script from being executed (e.g. due to AJAX calls that are going to be made) the only thing you can do is to remove that code in the console on-the-fly, thus preventing those calls from being executed, then you could execute the remaining code without problems.

P.S: I tried to find out an option for terminating the execution in some tutorials / guides like the following ones, but couldn't find it. As I said before, probably there is no such option.

Refering to the answer given by @scottndecker to the following question, chrome now provides a 'disable JavaScript' option under Developer Tools:

Good thing is you can stop and rerun again just by checking/unchecking it.

You can pause on any XHR pattern which I find very useful during debugging these kind of scenarios.

For example I have given breakpoint on an URL pattern containing "/"

If you have a rogue loop, pause the code in Google Chrome debugger (the small "||" button while in Sources tab).

You will get the Aww Snap message and then you can reload (F5).

As others have noted, reloading the page at the point of pausing is the same as restarting the rogue loop and can cause nasty lockups if the debugger also then locks (in some cases leading to restarting chrome or even the PC). The debugger needs a "Stop" button. Nb: The accepted answer is out of date in that some aspects of it are now apparently wrong. If you vote me down, pls explain :).

Open the source tab in 'Developer Tools', click on a line number in a script that is running, this will create a breakpoint and the debugger will break there.

There are many appropiate solution to this problem as mentioned above in this post, but i have found a small hack that can be inserrted in the script or pasted in the Chromes console (debugger) to achieve it:

This will cause execution to be paused when you hit F12.

Not the answer you're looking for? Browse other questions tagged javascript debugging google-chrome-devtools or ask your own question.

423
How do you launch the JavaScript debugger in Google Chrome?
898
How to find event listeners on a DOM node when debugging or from the JavaScript code?
565
View HTTP headers in Google Chrome?
2194
How to decide when to use Node.js?
3
chrome debug missing script
78
Chrome JavaScript Debugging - how to save break points between page refresh or break via code?
498
How to reposition Chrome Developer Tools
708
How to set a JavaScript breakpoint from code in Chrome?
661
How do I view events fired on an element in Chrome DevTools?
156
Breakpoint on property change