Can somebody tell me why Dijkstra's algorithm for single source shortest path assumes that the edges must be non-negative.

I am talking about only edges not the negative weight cycles.

Recall that in Dijkstra's algorithm, once a vertex is marked as "closed" (and out of the open set) - the algorithm found the shortest path to it, and will never have to develop this node again - it assumes the path developed to this path is the shortest.

But with negative weights - it might not be true. For example:

Dijkstra from A will first develop C, and will later fail to find A->B->C

Note that this is important, because in each relaxation step, the algorithm assumes the "cost" to the "closed" nodes is indeed minimal, and thus the node that will next be selected is also minimal.

The idea of it is: If we have a vertex in open such that its cost is minimal - by adding any positive number to any vertex - the minimality will never change.
Without the constraint on positive numbers - the above assumption is not true.

Since we do "know" each vertex which was "closed" is minimal - we can safely do the relaxation step - without "looking back". If we do need to "look back" - Bellman-Ford offers a recursive-like (DP) solution of doing so.

Consider the graph shown below with the source as Vertex A. First try running Dijkstra’s algorithm yourself on it. 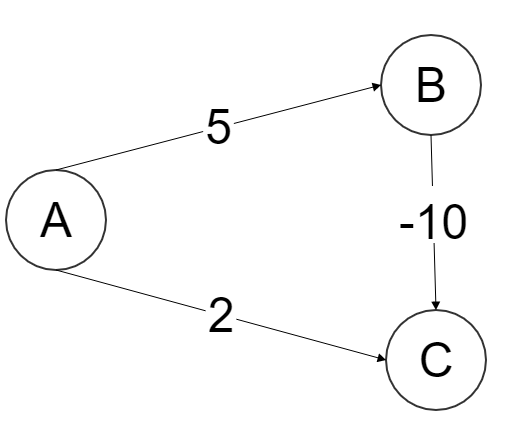 When I refer to Dijkstra’s algorithm in my explanation I will be talking about the Dijkstra's Algorithm as implemented below, 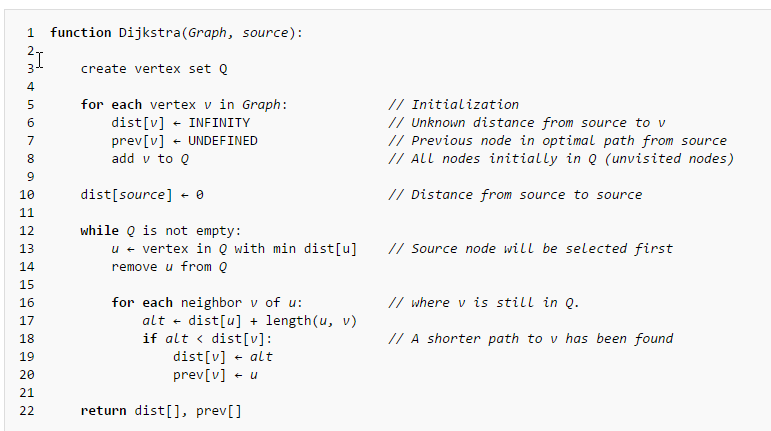 So starting out the values (the distance from the source to the vertex) initially assigned to each vertex are,

We first extract the vertex in Q = [A,B,C] which has smallest value, i.e. A, after which Q = [B, C]. Note A has a directed edge to B and C, also both of them are in Q, therefore we update both of those values,

Finally we extract B, after which

. Note B has a directed edge to C but C isn't present in Q therefore we again don't enter the for loop in line16,

So we end up with the distances as

So for this graph Dijkstra's Algorithm wrongly computes the distance from A to C.

This happens because Dijkstra's Algorithm does not try to find a shorter path to vertices which are already extracted from Q.

What the line16 loop is doing is taking the vertex u and saying "hey looks like we can go to v from source via u, is that (alt or alternative) distance any better than the current dist[v] we got? If so lets update dist[v]"

Note that in line16 they check all neighbors v (i.e. a directed edge exists from u to v), of u which are still in Q. In line14 they remove visited notes from Q. So if x is a visited neighbour of u, the path

is not even considered as a possible shorter way from source to v.

In our example above, C was a visited neighbour of B, thus the path

was not considered, leaving the current shortest path

This is actually useful if the edge weights are all positive numbers, because then we wouldn't waste our time considering paths that can't be shorter.

So I say that when running this algorithm if x is extracted from Q before y, then its not possible to find a path -

which is shorter. Let me explain this with an example,

And as we already assumed that the edge weights are positive, i.e. length(x,y)>0. So the alternative distance (alt) via y is always sure to be greater, i.e. dist[y] + length(x,y)> dist[x]. So the value of dist[x] would not have been updated even if y was considered as a path to x, thus we conclude that it makes sense to only consider neighbors of y which are still in Q (note comment in line16)

But this thing hinges on our assumption of positive edge length, if length(u,v)<0 then depending on how negative that edge is we might replace the dist[x] after the comparison in line18.

So any dist[x] calculation we make will be incorrect if x is removed before all vertices v - such that x is a neighbour of v with negative edge connecting them - is removed.

Because each of those v vertices is the second last vertex on a potential "better" path from source to x, which is discarded by Dijkstra’s algorithm.

So in the example I gave above, the mistake was because C was removed before B was removed. While that C was a neighbour of B with a negative edge!

Just to clarify, B and C are A's neighbours. B has a single neighbour C and C has no neighbours. length(a,b) is the edge length between the vertices a and b.

This assumption makes the algorithm faster than algorithms that have to take negative weights into account.

Inductive Hypothesis: At each step we will assume that all previous iterations are correct.

Inductive Step: When we add a vertex V to the set A and set the distance to be dist[V], we must prove that this distance is optimal. If this is not optimal then there must be some other path to the vertex V that is of shorter length.

Suppose this some other path goes through some vertex X.

Now, since dist[V] <= dist[X] , therefore any other path to V will be atleast dist[V] length, unless the graph has negative edge lengths.

Thus for dijkstra's algorithm to work, the edge weights must be non negative.

Try Dijkstra's algorithm on the following graph, assuming A is the source node and D is the destination, to see what is happening:

Note that you have to follow strictly the algorithm definition and you should not follow your intuition (which tells you the upper path is shorter).

The main insight here is that the algorithm only looks at all directly connected edges and it takes the smallest of these edge. The algorithm does not look ahead. You can modify this behavior , but then it is not the Dijkstra algorithm anymore.

Dijkstra's Algorithm assumes that all edges are positive weighted and this assumption helps the algorithm run faster ( O(E*log(V) ) than others which take into account the possibility of negative edges (e.g bellman ford's algorithm with complexity of O(V^3)).

This algorithm wont give the correct result in the following case (with a -ve edge) where A is the source vertex: 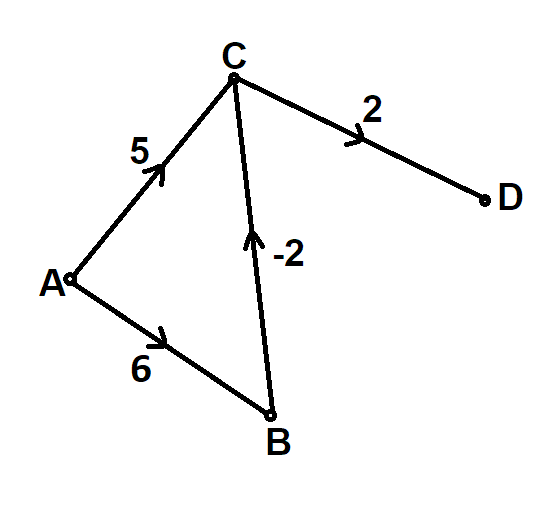 Also, Dijkstra's Algorithm may sometimes give correct solution even if there are negative edges. Following is an example of such a case:

However, It will never detect a negative cycle and always produce a result which will always be incorrect if a negative weight cycle is reachable from the source, as in such a case there exists no shortest path in the graph from the source vertex.

You can use dijkstra's algorithm with negative edges not including negative cycle, but you must allow a vertex can be visited multiple times and that version will lose it's fast time complexity.

In that case practically I've seen it's better to use SPFA algorithm which have normal queue and can handle negative edges.

But the question itself is maybe based on a wrong understanding of the weight of paths. If negative weights on paths would be allowed in pathfinding algorithms in general, then you would get permanent loops that would not stop.

What is the optimal path between A and D?

Any pathfinding algorithm would have to continuously loop between B and C because doing so would reduce the weight of the total path. So allowing negative weights for a connection would render any pathfindig algorithm moot, maybe except if you limit each connection to be used only once.

So, to explain this in more detail, consider the following paths and weights:

So, what's the perfect path? Any time the algorithm adds a BC step, it reduces the total weight by 2.

So the optimal path is A (BC) D with the BC part being looped forever.

Dijkstra will actually not loop, since it keeps a list of nodes that it has visited. But it will not find a perfect path, but instead just any path.

Recall that in Dijkstra's algorithm, once a vertex is marked as "closed" (and out of the open set) -it assumes that any node originating from it will lead to greater distance so, the algorithm found the shortest path to it, and will never have to develop this node again, but this doesn't hold true in case of negative weights.

Not the answer you're looking for? Browse other questions tagged algorithm shortest-path dijkstra or ask your own question.

1562
What is the best algorithm for overriding GetHashCode?
1214
Easy interview question got harder: given numbers 1..100, find the missing number(s) given exactly k are missing
140
Why use Dijkstra's Algorithm if Breadth First Search (BFS) can do the same thing faster?
122
Negative weights using Dijkstra's Algorithm
1162
Ukkonen's suffix tree algorithm in plain English
1772
Image Processing: Algorithm Improvement for 'Coca-Cola Can' Recognition
3
Dijkstra's algorithm when all edges have same weight
1987
What is the optimal algorithm for the game 2048?
5
Why do all-pair shortest path algorithms work with negative weights?