Handler “ExtensionlessUrlHandler-Integrated-4.0” has a bad module “ManagedPipelineHandler” in its module list

To be honest, I've tried to turn a dirty trick on IIS and just when I thought that I was going to get away with it, I realized my workaround doesn't work. Here's what I've tried to do:

1) I have ASP.NET application which has Preloader class that inherits IProcessHostPreloadClient and does all the heavy initialization in Preload method implementation (application is complex and it's a part of an enormous system, so it requires approximately 2 minutes to establish connections to all necessary services and pre-instantiate some Unity registrations).

2) I have a lot of work that needs to be done on application shutdown (unsubscribing, disconnecting, disposing,...), and I guess the best place to do it is in *Application_End* method located in Global.asax.

4) Now comes the messy part... I've tried to make a GET request from code at the end of the Preload method, and it worked. But this solution seemed bad to me, even though it worked. So, I've tried a lot of things, and the last thing I tried was this:

... and that has done it's purpose. *Application_Start* was called, (I've checked response, it was containing login page that was supposed to be displayed in initial request) and on Application Pool shutdown application ended gracefully by doing necessary work in *Application_End*.

After the application was started (preloaded and initiated) in this manner, this is what happened when I wanted to reach application via Web browser:

I am unable to figure this out. Can anybody tell me why this happens and how to fix it?

If I don't figure this out, I will go back to first solution (sending GET request from code) but this problem will bug me since I don't even have an idea what's wrong.

You are using SimpleWorkerRequest in a scenario that it wasn't designed for. You are using it inside of IIS. If you look at the prior MSDN link (emphasis is mine):

Provides a simple implementation of the HttpWorkerRequest abstract class that can be used to host ASP.NET applications outside an Internet Information Services (IIS) application. You can employ SimpleWorkerRequest directly or extend it.

Also, if you look at the MSDN documentation for the System.Web.Hosting namespace (SimpleWorkerRequest is in this namespace), you will also see something similar to the above (again, emphasis is mine):

I would recommend removing the call to SimpleWorkerRequest. Instead, you can use a Microsoft solution to make sure your web site automatically starts up after it recycles. What you need is the Microsoft Application Initialization Module for IIS 7.5. It is not complicated to configure, but you need to understand the exact options. This is why I would also recommend the Application Initialization UI for IIS 7.5. The UI is written by an MSDN blogger.

So what exactly does the Microsoft solution do? It does what you are trying to do - IIS sends a "get" request to your website after the application pool is started.

Try to re-register ASP.NET with aspnet_regiis -i. It worked for me.

A likely path for .NET 4 (from elevated command prompt):

If you're running into this error with Windows 8/Windows Server 2012 and .Net 4.5 follow these instructions here: http://www.britishdeveloper.co.uk/2013/01/handler-extensionlessurlhandler.html

Go to "turn Windows features on or off" Then Internet Information Services Then World Wide Web Services Then Application Development Features And then enable ASP.NET 4.5

This worked for me (although the wizard and wording is a little different in Windows Server 2012, but you'll figure it out). With this being said, why this is necessary after installing everything through the Web Platform Installer including all of the dependencies is completely beyond me...

Despite following most of the advice on this page, I was still getting problems on Windows Server 2012. Installing .NET Extensibility 4.5 solved it for me:

For Windows 10 / Windows Server 2016 use the following command:

The suggested answers with aspnet_regiis doesn't work on Windows 10 (Creators Update and later) or Windows Server 2016:

Interestingly, the "Turn Windows Features On/Off" dialog didn't allow me to untick .NET nor ASP.NET 4.6, and only the above DISM command worked. Not sure whether the featurename is correct, but it worked for me.

Run one of these commands :

In my case (Windows 10 + IIS 10) i had to open "Turn Windows Features On or Off" and then go to Internet Information Services > World Wide Web Services > Application Development Features > and check ASP.NET 4.6

Making this its own post because this had me going for hours.

I saw maybe a dozen of similar posts here and elsewhere about this problema and the aspnet_regiis fix. They weren't working for me, and aspnet_regiis was acting odd, just listing options etc.

As user ryan-anderson above indicated, you cannot enter .exe

For those less comfy with things outside IIS on the server, here's what you do in simple steps.

If you did this correctly, you will see that it starts to install asp.net, and then tells you it succeeded.

I solved this problem, adding in "Turn Windows features on or off" The option ASP.NET 4.7 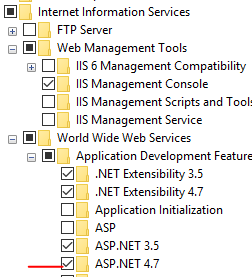 Make sure that you have set your application-site version from v2.0 to v4.0 in IIS Manager:

After that, install your ASP.NET.

Restart your application-site in IIS Manager and enjoy.

I know this is an oldie, but thought I might add some value. For those of us running Server Core outside of a domain (domain members can just run Server Manager remotely to add/remove features/roles), you have to resort to command lines.

That should be equivalent to using server manager.

I was challenged by the same error message, with .net 4.7 installed.

The solution was to follow one earlier mentioned post to go with the "Turn Windows feature on or off", where the ".NET Framework 4.7 Advanced Services" --> "ASP.NET 4.7" already was checked.

Further down the list, there is the "Internet Information Services" and subnote "Application Development Features" --> "ASP.NET 4.7", that also needs to be checked.

When enabling this, allot of other features are enabled... I simply pressed the Ok button, and the issue was resolved. Screendump of the windows features dialog

I'm working on Windows Server 2012. .NET Extensibility 4.5 feature is on. WebDAVModule removed. I was still getting 500.21 error on ASP.NET route '/docs'.

I had this problem and found that removing the following folder helped, even with the non-Express edition.Express:

This error started happening to me out of nowhere last week, affecting the existing web sites on my machine. I had no luck with it trying any of the suggestions here. Eventually I removed WebDAV from IIS completely (Windows Features -> Internet Information Services -> World Wide Web Services -> Common HTTP Features -> WebDAV Publishing). I did an IIS reset after this for good measure, and my error was finally resolved.

I can only guess that a Windows update started the issue, but I can't be sure. 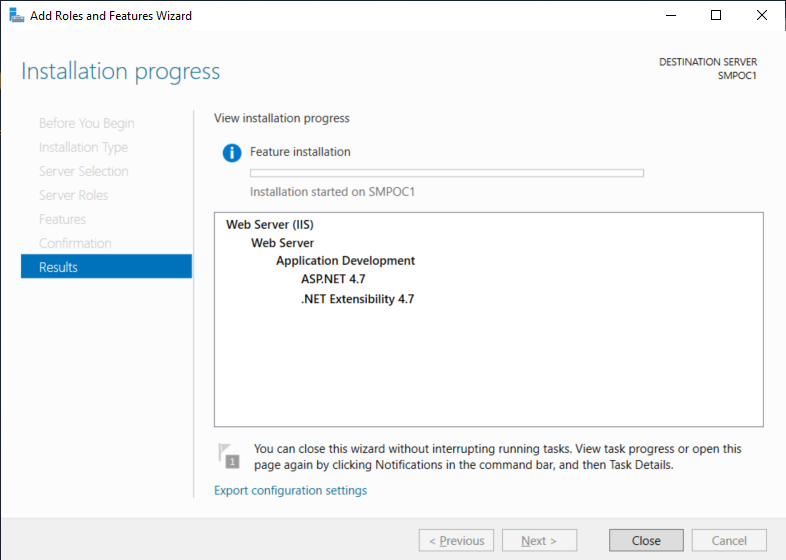 You could fix it by change the "ExtensionlessUrlHandler-Integrated-4.0" type in iis to System.Web.DefaultHttpHandler

For me, removing WebDAV from my server caused the application to return a 503 Service Unavailable Error message when using PUT or DELETE, so I re-installed it back again. I also tried completely removing .NET Framework 4.5 and reinstalling it and also tried re-registering as suggested but to no avail.

I was able to fix this by disabling WebDAV for the individual application pool, this stopped the 'bad module' error when using PUT or DELETE.

I still left the remove items in my web.config file.

This link is where I found the instructions but it's not very clear.

This maybe not a usefull solution for OP but it concerns the same "error" message.

We are hosting PHP pages on IIS8.5 with .NET 4.5 installed correctly.

We make use of the preload functionality to make sure our application is always responsive across the board.

After a while we started getting this error at random.

In the web.config : I put skipManagedModules to true, -> don't do this!

Although website is php, the routing to the paging is managed by the modules!!!

I also ran into that problem. My MVC4 App is running on a Windows Server 2012 R2 with IIS 8.5. None of these posted solutions worked for me...installing the missing frameworks through IIS Features could have solved it but the installation always failed.

I had to use the Web Platform Installer and installed the following packages: 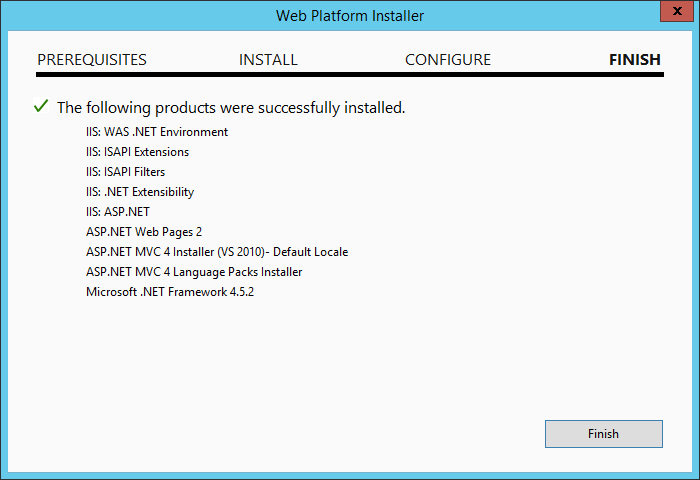 I was facing this issue in a web application hosted on a shared hosting server. So obviously did not have direct access to IIS, so could not apply many solution proposed here.

On the hosting provider's control panel I enabled error logging for IIS and ASP.Net. And then got to know that error actually lied in a missing cshtml.

Not the answer you're looking for? Browse other questions tagged c# asp.net iis web-applications or ask your own question.

83
500.21 Bad module “ManagedPipelineHandler” in its module list
13
WebDAV and WebAPI together cause Error: Handler “ExtensionlessUrlHandler-Integrated-4.0” has a bad module “ManagedPipelineHandler” in its module list
4
How to get PUT and DELETE verbs to work with WebAPI on IIS
2
Unable to fix error : This configuration section cannot be used at this path
0
Unable to access Web API 2 web site
0
Asp.net MVC 4 razor resource you are looking for cannot be displayed