Where is the guideline that says you shouldn't write to the Program Files area?

Many questions on SO say "Windows developer guidelines" or "windows design guidelines" say that you shouldn't write temporary or program data to the Program Files area, but as far as I can tell none of them actually link to a piece of documentation that says as much. Searching the MSDN has yielded me no results. Windows will make the area read-only, so it can be enforced by the OS, but that doesn't mean developers didn't try to write there anyway (e.g., when porting older, XP and earlier based programs forward.)

I realize that it seems odd to ask about it this late into Windows development (since, as a commenter below pointed out, has been enforced by the OS for more than a decade), but a document that says so is sometimes necessary to satisfy people.

With that in mind, Does Microsoft have a document published stating we shouldn't write application data to the Program Files area, and if so, where is it?

From Technical requirements for the Windows 7 Client Software Logo Program:

Install to the correct folders by default

Users should have a consistent and secure experience with the default installation location of files, while maintaining the option to install an application to the location they choose. It is also necessary to store application data in the correct location to allow several people to use the same computer without corrupting or overwriting each other's data and settings.

And I'm quite sure that there's similar stuff for every Windows version of the NT family going back to Windows NT 4 or even earlier.

Edit: the original link in this post to the Windows 7 Logo program exists no more. Here you find the current link to the Certification requirements for Windows Desktop Apps. See Section 10, Apps must install to the correct folders by default

In later versions of windows (Vista, 7 and of course server versions) access permission are restricted for "special folders" including "Program Files". Even if your program is elevated to have sufficient privileges to write to this folder it is still a bad idea.

I don't know of any guidelines that state this but there is a list of special folders and what they are meant for. The fact that there is a special folder for nearly all types of data I can image means there is no need to use the program files folder. 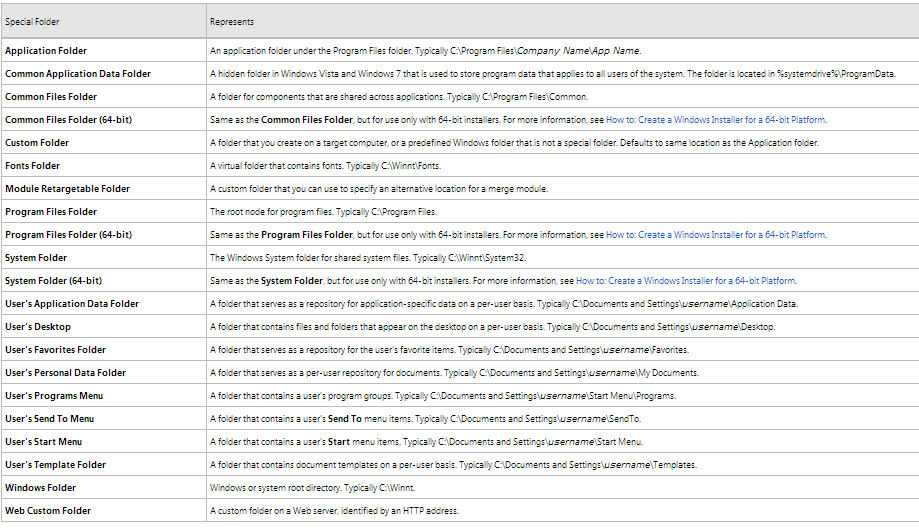 Not the answer you're looking for? Browse other questions tagged windows or ask your own question.

9
Looking for documentation on the “right” way to install apps on Windows 7
0
How to make MSI file by vs2010 that allow my app to create .txt file in Client Machine which is installed in C:\Program File\myAppFolder

3
Windows Layout Look and Feel
0
What is the simplest program I can write to invoke a batch script?
1
tracking down LNK2005: “already defined”
2
Is wcslen part of the ISO/IEC 14882:2003 C++ standard library?
0
Python subprocess directing data to standard intput
48
Simple Java program 100 times slower after plugging in USB hotspot
0
Which SQL Server files/folders should be excluded from disk write protection (FBWF) on a windows embedded standard system?
0
Qt app built with CMake compiles, but doesn't run, in Windows