I am debugging someone else's work and the solution is quite large. When I try to build the entire thing, several projects within the solution don't build and just skip. Viewing the output window during the build process says:

How can I determine why these builds were skipped? I am unable to find additional output.

Right click the solution, choose Properties and then Configuration Properties. Here you can choose which projects to build.

[edit]:
See Kdt's comment: ... when I looked in configuration properties ... the project build target was configured for "Mixed Platforms" while the solution was set to build "Any CPU".

*When this problem happened to me, The main project only had 'Any CPU' and it set the child dll to 'any CPU' too, however, I'd deleted that profile and left only 'x86'. Picking x86 for just the dll make it start working
[/edit]

Build, rebuild, and clean operations were being skipped. Unloading and reloading didn't help, and neither did restarting Visual Studio.

Restarting Visual Studio did the trick

If the confixguration is x64 and the x64 compiler isn't installed it will skip the project.

My solution is the same as mentioned previously: Delete -> Add existing project

But this solution implies that references between projects get gone

To avoid re-adding references: and in case if you use version-control system like GIT or TFS or whatever, it is possible to acheve goal with the following steps:

The visual studio 2008 , it can be because 64 bit compiler wouldn't have installed.

Problem exists in VS 2010 as well; of the proposed solutions: editing build config, cleaning, changing/re-changing target framework, do NOT work. But unloading and reloading the project does.

I had a weird one that may be worth documenting amongst the other possibilities here..

But somehow my solution file had been updated as if the shared project was it's own thing that needed building. I'm guessing then that any time I was trying to build and I hadn't changed the code in the shared project, then it figured 'nothing has changed, skip those builds'

I found the shared project in the solution.sln file like:

..which is fine. What isn't fine is that this project also appeared in the GlobalSection(ProjectConfigurationPlatforms) = postSolution like:

I removed those four lines from my .sln file, and now things seem happy again

Hey, just fixed this one. Thought it might help. You most likely didn't install corresponding compilers along with the visual studio. This happened to me today - by default, VS 2008 installer doesn't install x64 C++ compiler.

If you have SP1, uninstall it before changing VS installation. When done, install SP1 again.

4.save the file 5.open visual studio and all better

Go to the build menu and choose "configuration manager". This will show which projects are configured to build in your selected configuration.

I had a similar thing just happen to me. I'm not sure what the problem was, but it would not Clean, Build, Rebuild, etc. I am operating in Visual Studio 2017 and wanted a netstandard2.0 assembly. The issue for me was that somehow the project type was incorrect, maybe I started from a netcoreapp class library, something like that, stuck in the Solution file, I do not recall. Anyway, I backed up the project, created a new netstandard class library project, and factored in the backed up bits, and that fixed it for me. HTH someone.

i updated to 15.9.11 , ... after some builds, same problem:most projects are skipped (which build a second ago without problems). Unloading/reloading the solution helps always in my case, but it will happen again soon.

I checked configuration manager , all checkmarks are set to build.

Maybe, it has something to do with nuget packages, but that is just a guess

The solution has only c++/vcxproj, no csproj. 64 and 32 are installed both

The first thing you need to do is diagnose why the build is skipping projects. So to get a detailed build output change the verbosity to detailed in the following place in Visual Studio. 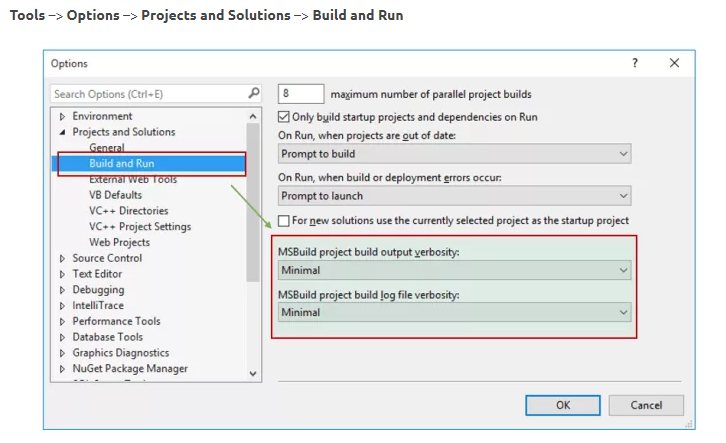 Had the same problem, found out that the project setting was for Itanium CPU, changing it to Intel fixed it.

Was running into the same problem with VS2005, all the configurations were correct . It was even skipping the Clean project command.

Finally Unloading /Reloading did the magic.

Right click on Solution at at your solution explorer, then, click on Property at bottom of the menu. In the property windows, click on Configuration Properties -> Configuration on the left pane, you will see the list of projects on right pane, make sure Build check box is checked in the popup window.

If your solution contains a NuGet project (*.nuproj) file, try unloading it and then rebuilding your solution.

This worked for me after none of the above worked.

This happened to me in VS 2019, and the solution was to simply restart visual studio. My build configuration was never modified.

I find that sometimes when you have target platform as set to lets say x86 in your solution and in your projects the project does not actually always had it selected.

To double check go to the project properties and see if you can select that platform in the Build->Platform setting if you can not then you will need to go to the configuration manager and create that configuration.

I had this problem with some Windows CE projects on a new PC. "Unload project" and "Reload project" appeared to fix the problem, but actually Visual Studio had simply switched to a different platform and built that.

It turned out that although my WinCE platform was shown as the active platform, Visual Studio didn't "really" see it. The solution was to reinstall the WinCE SDK with administrator priveleges:

I had a very similar issue after generating a project from a decompiler from Telerik, then trying to recompile it. The project was skipped whenever I tried to rebuild it. Tried a lot of the suggestions above, but for me, it was the .NET Framework selected in the project properties.

Then, rebuild, and I got a bunch of assembly reference missing errors, which makes sense since I haven't added references to them yet.

I had this problem in Visual Studio 2017 15.9.4 and after some searching and putting some time I found out that in my solution the .csproj file of one of projects got corrupted after merging in TFS. (I could build other projects by unloading the problematic project from solution). How I resolved my problem was that I compared the .csproj file before and after the merge and do fix that. And by fix I mean since my own project's type was .netStandard I removed unnecessary lines including Configuration PropertyGroup, all and others in the new .csproj file to make it similar to previous .netstandard-style version.

I had similar problem, I had one project which could not load in solution explorer due to some reason. When I loaded that project it worked like a charm.

I just got into this trouble:

Had updated VS 2017 to latest version 15.9.11 and few of my projects were updated to .net core 2.2. I initially loaded all projects tried building/ cleaning/ rebuilding and everything were skipped. Followed the below to resolve:

That's it everything was back in action and I was able to build all projects successfully.

if all the other settings are correct .

Issue: Rebuilding, Build, Clean was skipping all my projects except two of them.

Solutions that didn't work for me:

This was happening because the target .NET framework was higher (4.7) for those 2 projects but lower for the other projects. A prompt had initially popped up asking me to install .NET 4.7, which I did, but it turns out it was unable to recognize that it is installed without restarting my machine.

I would recommend installing the latest .NET Framework and restarting machine to avoid running into further problems.

Not the answer you're looking for? Browse other questions tagged visual-studio msbuild or ask your own question.