How to properly setup VS2008 for x64 programing?

On x64 win7, I installed VS2008 and x64 compile tools. I was testing it with a simple "hello world" console program. Both x86 and x64 versions were compiled flawless. Both Debug and Release subversions of the x86 version works fine. The release x64 version works fine too. However, the Debug x64 version always raises the side-by-side error. It seems like the debug runtime cannot be found.

Someone suggest to install the Debug runtime redist. That surprises me: does the x64 debug runtime should already come with the VS2008 installation as the x86 version?

@sj1900 "Some of the x64 compiler components are optional on a VS installation. It's worth checking that they have all been installed." here is the screenshots: 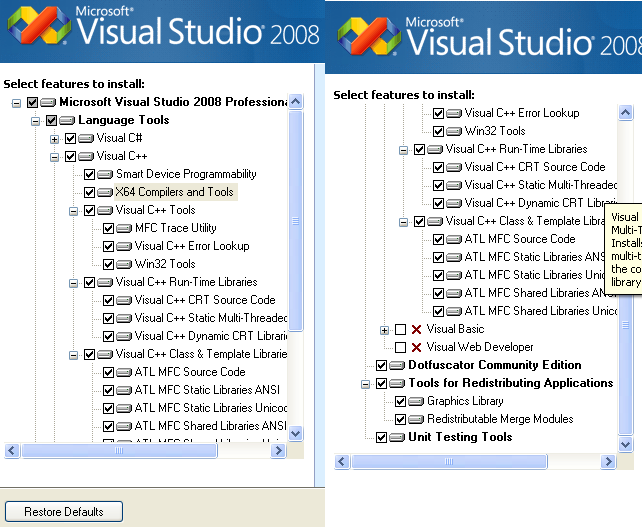 I did not see any further options here. There is no amd64_microsoft.vc90.debugcrt in the winSxS at all. Strange problem.

Some of the x64 compiler components are optional on a VS installation. It's worth checking that they have all been installed.

After hours of head scratching and testing, I finally reckon that is a VS2008 installer bug, confirmed by several online references.

If one installed the vs2008 without the x64 compiler tool at the first time but installed the x64 tools later via the modification feature of the installer, the bug will show up: all the x64 debug runtimes and the nodebug openMP runtime will be missing. Reinstall will not fix this problem.

I tried lots of methods suggested all over the internet: install all the hotfixes, ATL updates, update to SP1 or install the VCredist ... Nothing works.

I figured out there are two ways to fix this:

PS: there are lots of other annoying but not fatal bugs in VS2008 which the M$ never bother to fix. Thus stay away from VS2008 and try VS2010, unless your projects have the special need that forces you to stick to VC9.

Not the answer you're looking for? Browse other questions tagged visual-studio-2008 visual-c++ 64-bit or ask your own question.