Whenever I try to use the OpenCV Stitcher class in iOS and I include the stitcher-header ( #include ) I end up with a compile error "Expected '{'" in exposure_compensate.hpp. Apparently the line enum { NO, GAIN, GAIN_BLOCKS }; is causing some sort of error.

I am very new to openCV but using other functions like filter2d() work as expected. How can I resolve this?

Update: this answer only highlights the bare minimum fix of the problem, and perhaps the root cause: order of dependencies. Please refer to other answers for better code / setup that you put in your project.

Then within that pch file, do something like this:

I also ran into this problem. As G. Führ ensure you include the opencv headers first. The easiest way to do this is add:

near the top of the apps "Appname-Prefix.pch" header. This is a precompiled header and makes it easy to guarantee that your opencv header will be included before any of the apple headers.

This means you won't accidentally include an apple header before this anywhere else in the app.

I solved this issue by importing any Apple headers before those of OpenCV, as mentioned in the beginning of the header:

I had a similar issue and I solved editing directly the opencv-framework files involved (in your case compensate.hpp) and comment from them the definition of the NO enum case definition. In this case the file was blender.hpp, but compensate.hpp has the same structure

In my case, I create a vertical image stitching app with openCV, error show as screenshot below. It is from exposure_compensate.hpp and blenders.hpp. From the error description, the top file is ../CVWrapper.mm, which is in my project instead of openCV pod project.

As above guys said, there is some conflict issue between C++ and Apple MACRO. And we should put C++ header above Apple header.

First, I try a workaround from internet, which said "replace NO with NO_EXPOSURE_COMPENSATOR = 0". This worked, but it modified openCV source code, I don't want to do that because I will not do version control on Pod files, then if other guys clone my repo/project, they will need to do the same modification on those source code.

Then, I follow the error message in Xcode, I did following changes in my CVWrapper.mm file. After that, those two error disappear. 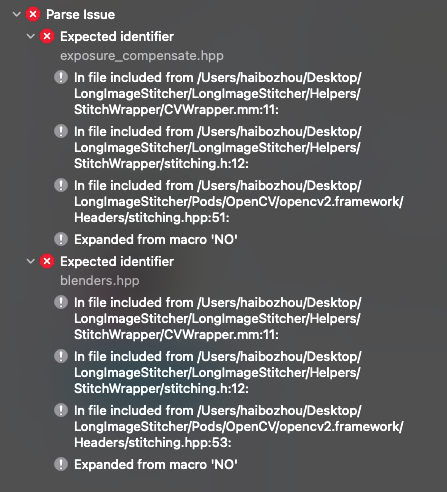 Not the answer you're looking for? Browse other questions tagged ios opencv compiler-construction or ask your own question.