Storyboards are rather a royal pain from a git workflow perspective when multiple people are collaborating on them. For example, the XML in the .storyboard file has its starting <document> tag's toolsVersion and systemVersion attributes altered by whatever configuration the most recent file manipulator happens to be running. Synchronizing everybody's Xcode versions precisely seems to help with toolsVersion, but systemVersion changes no matter what, depending on the specific Mac and/or OS X version the developer is running.

This is idiotic, but mostly harmless. What worries us, though, is that at other times some other changes are automatically made to the storyboard just by opening them after a git pull. That is to say, Alice makes changes to a storyboard, commits and pushes them to the repository. Bob then pulls Alice's changes and opens up the storyboard to make further changes. The moment he opens the storyboard, the file icon immediately changes to a modified-but-unsaved state, and a git status shows that any number of weird changes have occurred. All this without Bob having changed anything or saved the file himself.

The most common automated change we're seeing is the disappearance or reappearance of the entire <classes> tag hierachy near the end of a storyboard file. We haven't figured out what is causing this. We may have several localized versions of a storyboard in various .lproj directories, and when opening them inside Interface Builder, the class hierarchy may spontaneously be removed from some and added into others, or left alone in some. This causes a lot of noise in git diff, but it doesn't actually break any functionality. We will often selectively add the actual changes we made into git's index, commit those, and then just discard the spontaneous, nonsensical <classes> changes. This is to keep commits small and nice, as they should be. Eventually, though, it just becomes too much to bother with since Xcode keeps re-doing the changes, and someone just ragecommits them along with some other stuff... which is fine until someone else's Xcode decides to want to change them back for no apparent reason. (Our commit history has a lot of swearing over this.)

Is anyone else seeing this behaviour? Is this an Xcode bug or a configuration issue on one or more of our developer Macs? We've seen some similar behaviour when collaborating with XIB files, but storyboards seem more susceptible to this.

I have not reverse-engineered Xcode; I made these observations by experimenting with Xcode and storyboard files. Nevertheless, I am almost 100% sure it works this way.

Here's the full bug at Apple

How to avoid Xcode gratuitous edits to storyboard files?

This issue can be mitigated somewhat by extremely judicious use of git add -p on any of Xcode's generated files, including storyboards, XIBs, Core Data models, and project files, all of which suffer from similar transient modifications that have no impact on the actual interface/model/project.

The most common junk changes I've seen on storyboards are the system version numbers (as you mention) and the constant addition and removal of the <classes> section, the omission of which I have never seen cause problems. For XIBs, it's the addition and removal of <reference key="NSWindow"/>, which isn't even a class in Cocoa Touch. Just wow.

Think of it like the sea: there is both a high and low tide. Let it wash over you.

You can ignore these modifications when staging your changes, reset the junk changes, and make a clean commit.

The single advantage I've seen with storyboards over XIBs from a technical standpoint is that Apple has not yet neutered FileMerge to refuse to merge conflicted storyboards. (FileMerge used to be able to merge XIBs, but newer versions broke that. Thxxxx guys 💜!!!)

Please file lots of bugs about all of these problems at http://bugreporter.apple.com/! And don't forget to create entries on OpenRadar.

Throwing on another answer here because this situation has improved greatly. The XML for the XIB file that represents the StoryBoard has been greatly simplified.

I have also recently bitten the bullet and started to use the interface in Xcode to Source Control. I have been on the command line for years and happy there, but the interface is nice and it lets you split commits, which is really important if you use a ticketing system that links to commits.

Anyway, I noticed today that there was a change on the storyboard and the built in diff showed me it was a single attribute in the document tag (systemVersion). So not a big deal.

I have read articles where people say SBs were outlawed on their teams because of merging issues. Total madness. They are so amazing, especially now that they have intelligent autolayout built in, you are really missing out if you are not using them.

It's helpful to know why this insanity is happening, but for those who believe in keeping their projects free of warnings and who just want a quick-and-dirty to get their projects back to a healthy state: 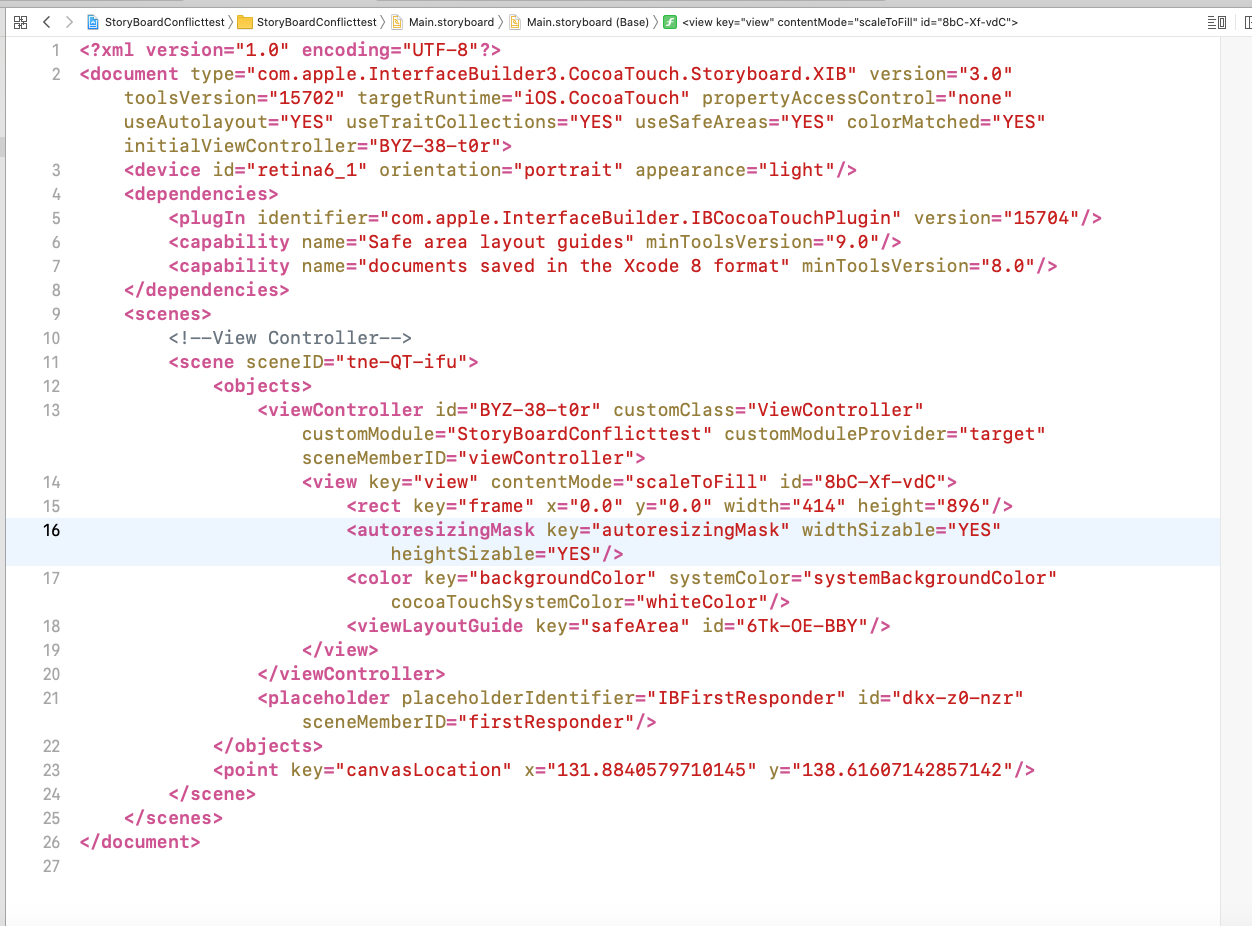 Storyboard is xml bounded by document type tag. Everything in the storyboard contains in scene sceneID= tag. scene tag holds every viewcontrollers. Thats the basic.

Now we added a UILabel and a UIButton on the view. Also set the autolayout of the elements. Now it's looks like : 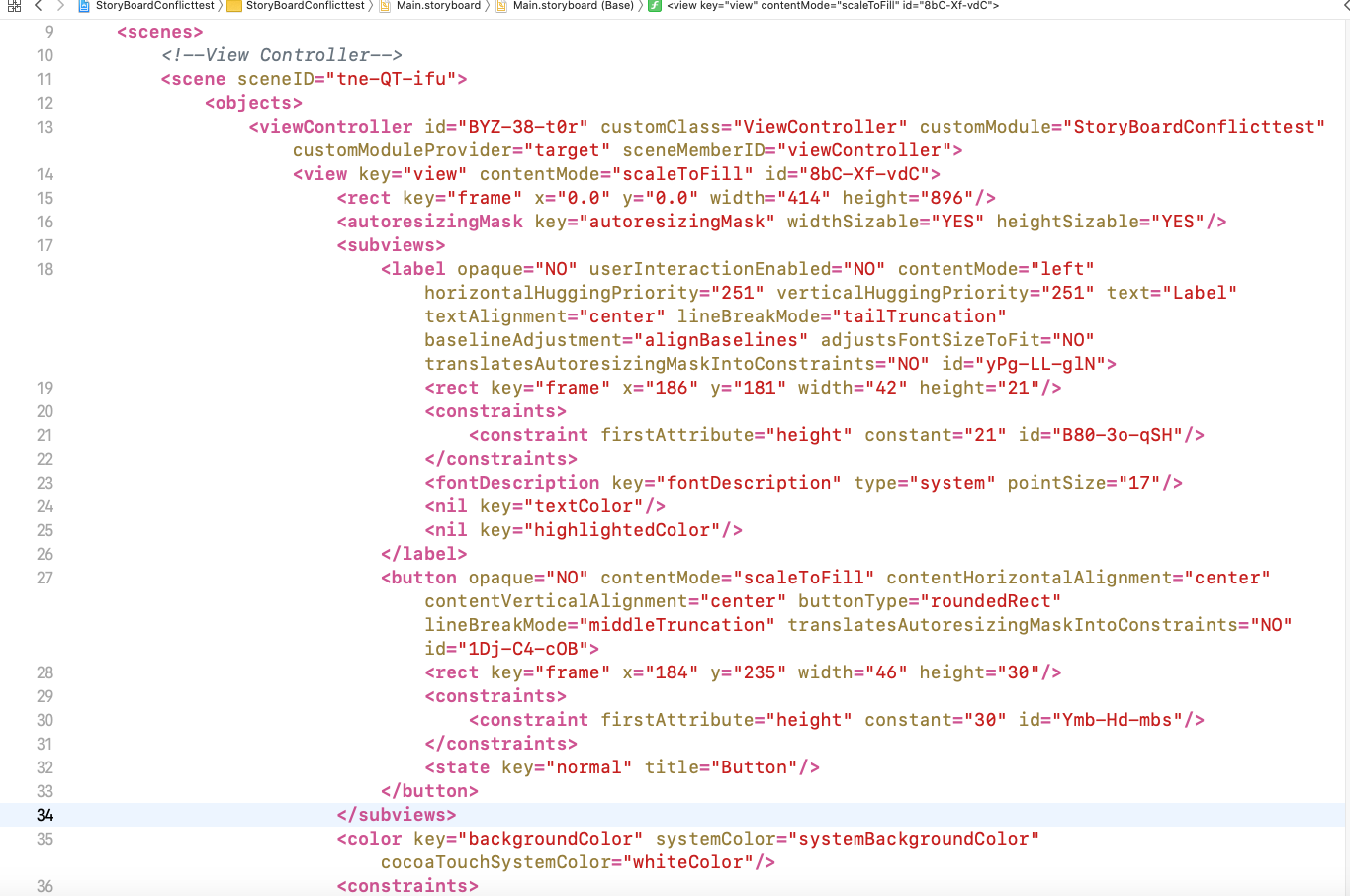 Adding a level/button to viewcontroller added some new code inside the subview tag of the view. Same thing will go for further element addition or any UI changes. Carefully check the tag structure which is really important to fix any conflicts. 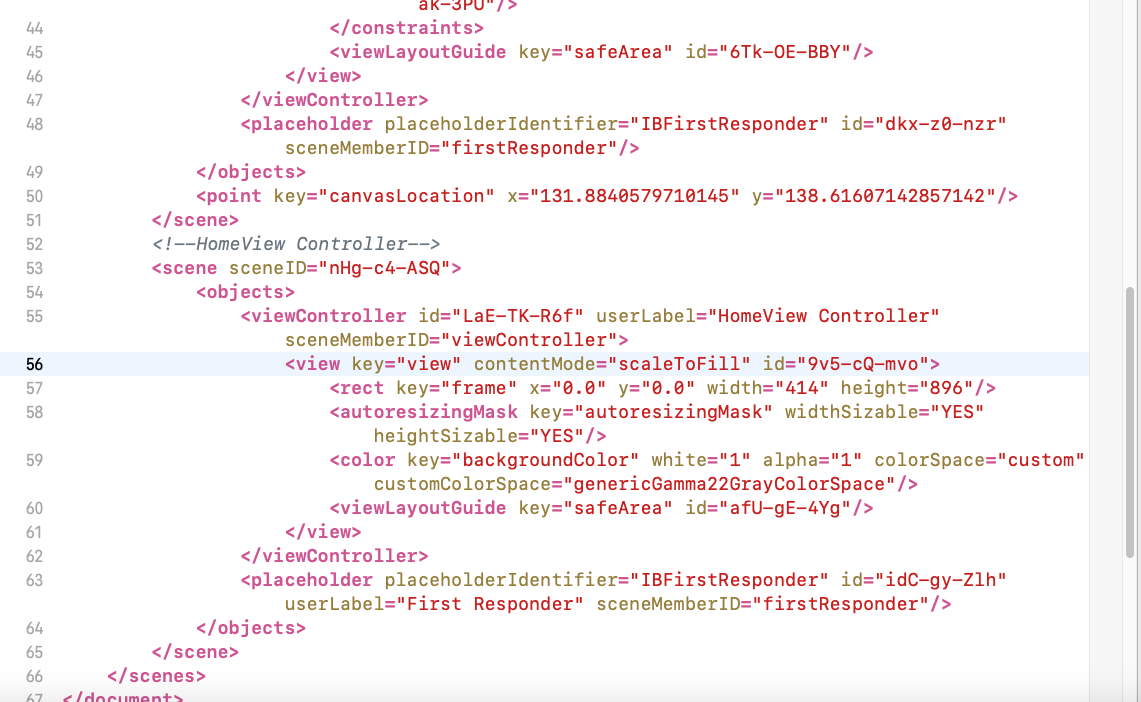 At this point, we will change the structure randomly and observe the issues/warnings. We change first viewcontroller label end tag and save the file. Now run it and look at the warning. Error says end tag is not correct which created from line 23. In line 23 , we see a label constrains is set with no end tag. That's the problem. Now we put the end tag and build the project. After setting end tag, we can view the storyboard successfully.

When face any warning of conflicts , please compare with your previous source and changes source. We remove the old/redundant code , keep the new code with proper tag start-end and get things fixed.

[N.B , i will update the answer with some more test cases when get times]

Not the answer you're looking for? Browse other questions tagged ios xcode interface-builder storyboard xib or ask your own question.

58
How to avoid Xcode gratuitous edits to storyboard files?
6
iOS Storyboarding - practical experience re: multiple developers?
16
Xcode - Storyboard views size and position modified when opening
4
Storyboards constraints suddenly all misplaced
2
How to stop InterfaceBuilder from meddling with my storyboard
2
Why is git adding useless auto-changes for storyboards, what do they mean and how do I get rid of them?
0
XCode 5 : svn discard is grayed out on storyboard file
0
Changed found in source tree from non-changed storyboard/xib