Confused about Base class library and Framework Class Library

The Base Class Library is the main core part of the framework, which allows the Common Language Runtime to operate properly. This would include the System namespace, core types, etc. 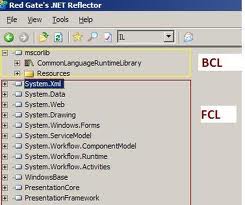 If you look at the image above, you will see the exact difference between BCL and FCL

In kind of the order you asked,

@Scott - From the text you posted

The remaining classes in the FCL are focused on specific functional areas, such as provding database access."

To me this means that the FCL is the whole, and the BCL is part of it, but maybe you read that differently.

The Base Class Library aka BCL is a set of classes that is used to get the framework itself and the virtual machine, that is the runtime that executes the code, running. It is the infrastructure for the .NET Framework. The BCL is part of the ECMA-335 standard.

The Framework class libraries are additional libraries that use the BCL to do their specific job.

It is a rich set of reusable types allowing you to achieve a high level of developer productivity by simplyfying many common programming tasks.

The remaining classes in the FCL are focused on specific functional areas, such as provding database access.

Not the answer you're looking for? Browse other questions tagged c# .net or ask your own question.