How to convert .svg files to a font? [closed]

Can anybody help me to convert .svg files to a font file? or is there a way to do it on the fly?

Unfortunately, neither is really a coding answer, which is what I had really hoped for (a command line utility for scripted conversion or perhaps an API with which somebody could write such a thing).

Still, I got what I was looking for by combining those two answers.

(This step might be optional.) Open up your SVG in the free software program InkScape. Copy the existing SVG and create a new project from the FontForge Glyph template. Paste into that template, standardize the look, size, and position, and save as PLAIN SVG, one file per character ("glyph").

IcoMoon is a rather straightforward tool. Click the purple Import Icons button on the top of the page to import each of your custom SVG glyphs. Then click "Get Info" on the set's preferences so you can name the set and give it some metadata. Use the "Edit" tool (the pencil icon) and click on each glyph to get the sizing and spacing just right.

When you're done, select all of the glyphs you want in the font and then press the "Generate Font" button at the bottom of the page. On the resulting screen, you can then map each glyph to a unicode character. On the right side, you can type or paste a character, or on the left side, you can enter its hexadecimal code. A program like GNOME Character Map (for Linux) or Windows Character Map or Mac OS Character Palette may help you find appropriate codes for your glyphs.

Now press the "Preferences" button at the top of the screen (or the gear at the bottom right) and finalize the name and metadata of your new font and press the "Download" at the lower right. You'll get a Fontname.zip file that contains a bunch of usage suggestions as well as the font files themselves.

I found the sizing and spacing was really hard to get right (I was making letters). I kept iterating on IcoMoon, installing the font, and comparing my letters to letters in a similar font (using a word processor). Sizing was easy to get right, but spacing was not so easy (and I wasn't even messing with ligatures or kerning!). Don't forget that some systems require flushing the font cache after installing a new font (on Linux, that's fc-cache from Fontconfig)

You may also want to validate your font. Font Squirrel is an online service that lets you do that, offering corrections as well as usage tips. I think IcoMoon already does this, so perhaps that's only of use for FontForge creations.

There are multiple online tools that allow you to upload SVG files and use those as icons for creating an icon font. Personally, I prefer the Icomoon App.

The Icomoon App allows you to do each of the following : 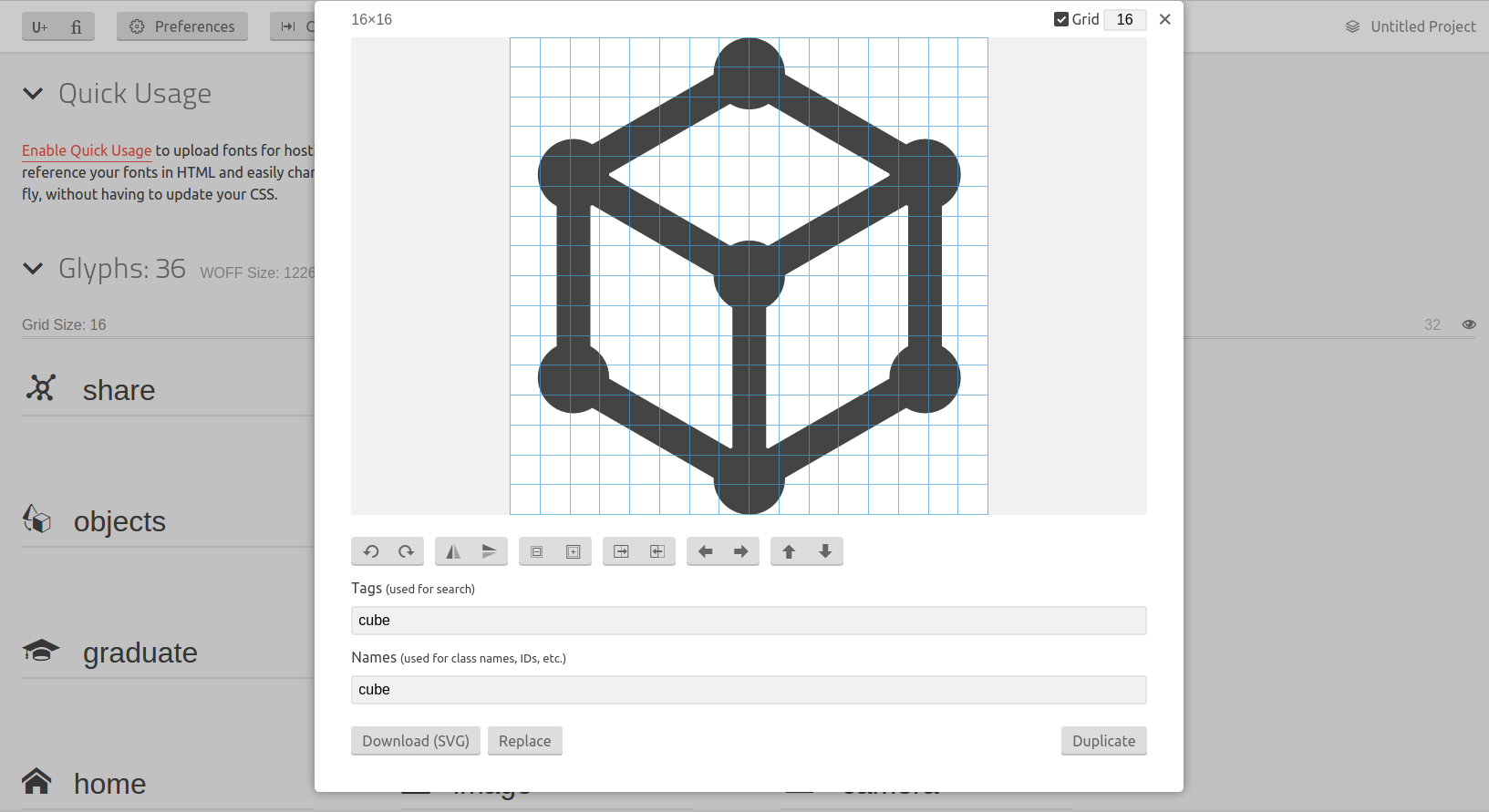 As others wrote, it is possible to import svg shapes into fontforge and some font designers work this way.

However, shapes (outlines) are only one part of a modern smart font, so that won't be sufficient in itself. You also need to work on metadata, kerning, hinting, etc. That's a lot of definitely not-fun, hard, but necessary stuff, while would-be font designers usually dream about ego-rewarding artistic drawing and not much else.

That's one reason svg fonts never caught up as a format, they're missing too many parts to be useful to render text.

Not the answer you're looking for? Browse other questions tagged css fonts svg or ask your own question.

29
Creating icon fonts with vector software (i.e. inkscape) and fontforge?
4
Which is the best approach to insert an vector (svg) graph into a react native application
3
Most efficient way to add inline SVG?
1
How do I embed fonts that defined in “SVG format” in a SVG file after the death of <glyph>?
0
How to replace an SVG icon with a font based icon (Font Awesome/Ion)?

531
How to add some non-standard font to a website?
4484
How to horizontally center a <div>
5398
How to disable text selection highlighting
469
How to add multiple font files for the same font?
471
Using .otf fonts on web browsers
636
Do I use <img>, <object>, or <embed> for SVG files?
422
How to convert a SVG to a PNG with ImageMagick?
447
How to change color of SVG image using CSS (jQuery SVG image replacement)?
1292
Font scaling based on width of container