How can I echo a newline in a batch file?

How can you you insert a newline from your batch file output?

This means you could define & echo. as a constant for a newline \n.

Here you go, create a .bat file with the following in it :

You only need the code between the REM statements, obviously.

There is a standard feature echo: in cmd/bat-files to write blank line, which emulates a new line in your cmd-output:

Output of cited above cmd-file:

Like the answer of Ken, but with the use of the delayed expansion.

First a single linefeed character is created and assigned to the \n-variable.
This works as the caret at the line end tries to escape the next character, but if this is a Linefeed it is ignored and the next character is read and escaped (even if this is also a linefeed).
Then you need a third linefeed to end the current instruction, else the third line would be appended to the LF-variable.
Even batch files have line endings with CR/LF only the LF are important, as the CR's are removed in this phase of the parser.

The advantage of using the delayed expansion is, that there is no special character handling at all.
echo Line1%LF%Line2 would fail, as the parser stops parsing at single linefeeds.

This doesn't answer the question, as the question was about single echo that can output multiple lines.

But despite the other answers who suggests the use of echo. to create a new line, it should be noted that echo. is the worst, as it's very slow and it can completly fail, as cmd.exe searches for a file named ECHO and try to start it.

For printing just an empty line, you could use one of

But the use of echo., echo\ or echo: should be avoided, as they can be really slow, depending of the location where the script will be executed, like a network drive.

If you need it in a single line, use the &. For example,

Now, say you want something a bit fancier, ...

Then just throw in a %n% whenever you want a new line in an echo statement. This is more close to your \n used in various languages.

& Means to do another command on the same line. We don't care about errorlevel(its an echo statement for crying out loud), so no && is needed.

All of this works because you can actually create variables that are code, and use them inside of other commands. It is sort of like a ghetto function, since batch is not exactly the most advanced of shell scripting languages. This only works because batch's poor usage of variables, not designating between ints, chars, floats, strings, etc naturally.

If you are crafty, you could get this to work with other things. For example, using it to echo a tab

When echoing something to redirect to a file, multiple echo commands will not work. I think maybe the ">>" redirector is a good choice:

If you need to put results to a file, you can use:

Just like Grimtron suggests - here is a quick example to define it:

The output will be,

Note that when this is put in a batch file, '%' shall be doubled.

If anybody comes here because they are looking to echo a blank line from a MINGW make makefile, I used

I hope this helps at least one other person out there :)

But the new lines are generated with only an LF character and I need CRLF characters (Windows version).

To this, at the end of the script, I have converted LF to CRLF.

If one needs to use famous \n in string literals that can be passed to a variable, may write a code like in the Hello.bat script below:

This way multiline output may by prepared in one place, even in other scritpt or external file, and printed in another.

The line break is held in newline variable. Its value must be substituted after the echo line is expanded so I use setlocal enableDelayedExpansion to enable exclamation signs which expand variables on execution. And the execution substitutes \n with newline contents (look for syntax at help set). We could of course use !newline! while setting the answer but \n is more convenient. It may be passed from outside (try Hello R2\nD2), where nobody knows the name of variable holding the line break (Yes, Hello C3!newline!P0 works the same way).

Above example may be refined to a subroutine or standalone batch, used like call:mlecho Hi\nI'm your comuter:

... in the Current CMD Session

... for the Current User

... for the Local Machine

It does not work with double-quotes that are not paired (opened and closed) in the same printed line, except if the only unpaired double-quote is the last character of the text, e.g.:

To prevent set \n=^&echo: suggested in answers herein echoing blank (and such printing its status) I first remembered the Alt+255 user from the times when Novell was a widely used network and code pages like 437 and 850 were used. But 0d255/0xFF is ›Ÿ‹ (Latin Small Letter Y with diaeresis) in Unicode nowadays.

Then I remembered that there are more spaces in Unicode than the ordinary 0d32/0x20 but all of them are considered whitespaces and lead to the same behaviour as ›␣‹.

But there are even more: the zero width spaces and joiners which are not considered as whitespaces. The problem with them is, that you cannot C&P them since with their zero width there's nothing to select. So, I copied one that is close to one of them, the hair space (U+200A) which is right before the zero width space (U+200B) into Notepad++, opened its Hex-Editor plugin, found its bit representation E2 80 8A and changed it to E2 80 8B. Success! I had a non-whitespace character that's not visible in my \n environment variable.

why not use substring/replace space to echo;?

For windows 10 with virtual terminal sequences there exists the means control the cursor position to a high degree.

To define the escape sequence 0x1b, the following can be used:

To output a single newline Between Strings:

To output n newlines where n is replaced with an integer:

Please note that all solutions that use cursor positioning according to Console Virtual Terminal Sequences, Cursor Positioning with:

only work as long as the bottom of the console window is not reached.

At the bottom there is no space left to move the cursor down so it just moves left (with the CR of CRLF) and the line printed before is overwritten from its beginning.

This worked for me, no delayed expansion necessary:

Note: The insecable space can be obtained with Alt+0160

[edit] Hmm you're right, I needed it in a Makefile, it works perfectly in there. I guess my answer is not adapted for batch files... My bad.

Be aware, this won't work in console because it'll simulate an escape key and clear the line.

Using this code, replace <ESC> with the 0x1b escape character or use this Pastebin link:

Adding a variant to Ken's answer, that shows setting values for environment variables with new lines in them.

This is not complete code, just an example. 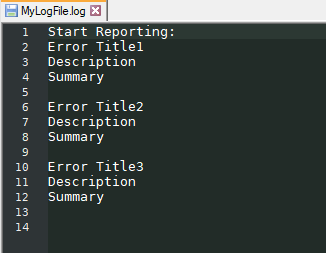 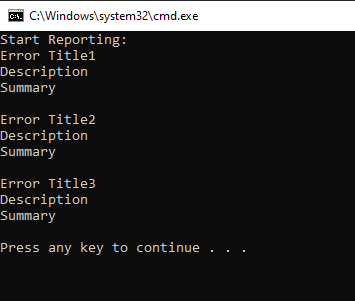 Not the answer you're looking for? Browse other questions tagged windows batch-file newline or ask your own question.

180
Echo a blank (empty) line to the console from a Windows batch file
19
Is it possible to put a new line character in an echo line in a batch file?
1
How to make line breaks in the ouput .txt file made using a batch file
1
Batch script - Echo variable with \n
-1
Window Batch: Echo redirecting to `\n` as literal then new line
0
How to add a line break into my batch script below?
896
Split long commands in multiple lines through Windows batch file
271
How to create empty text file from a batch file?
267
Windows batch: echo without new line
167
How does the Windows Command Interpreter (CMD.EXE) parse scripts?
See more linked questions