I have an action in my controller that I am having trouble with. This is my first rails app, so I'm not sure of the best practices surrounding rails.

In the controller, the first if statement executes: render :json => { :message => "group_id not found" } but @group.destroy is still being executed. This seems counter-intuitive to me, I would think that the render method should exit the controller.

Why is the controller not exiting after render is called?

The purpose of this block of code is to recover gracefully when no record can be found with the passed in ID. Is this the correct way of doing something like this?

About your code, I think i would write like this:

I think render is just a method call, you call it, and the method will be placed on top of the stack which holds the sequence of execution of the method . After you finish render , you go back to the remove method and continue to execute the remaining. But you can avoid this problem by manually exit the remove method 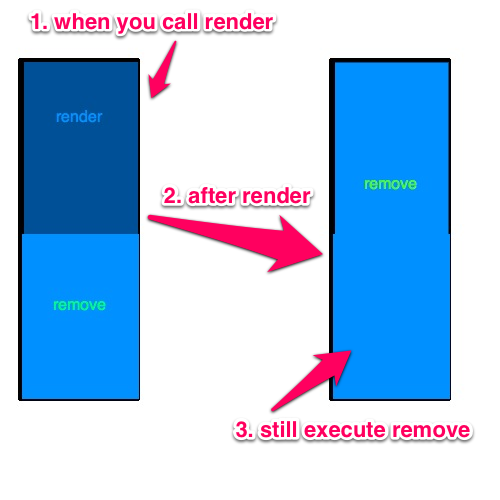 Not the answer you're looking for? Browse other questions tagged ruby-on-rails controller or ask your own question.

2
Rails RESTful controller and rendering after custom action
1019
Understanding the Rails Authenticity Token
1519
Rails: How can I rename a database column in a Ruby on Rails migration?
1094
How do I get the current absolute URL in Ruby on Rails?
1
Rails Controller -- just return the processed data (dont load into a view)
4
Empty response when rendering RABL template with RSPEC
0
Rails 4 scaffold generator Testing controller action update fails
0
Rails 4.1 Using a Partial and Rendering Current Path
0
Got failure in integration testing of rails
1
How to print an api response which can be either JSON or non-JSON in rails?