My widget is comprised of 2 buttons and a listview displaying data. Most times, when the widget provider's onUpdate method is called, everything loads normally and everyone is happy.

However I've noticed sometimes after the update method is called, the widget just completely fails to load its data. The listview is empty, and all of the buttons are non-responsive. It's as if I initialized the layout into the widget, but none of the pending intents nor the adapter for list were set.

I logged everything and found that this isn't the case. The pending intents ARE created, as is the list adapter, every time, including the random time when it fails. For a long time I thought it had to do with how the list data is populated into the adapter, but seeing it work every single time, coupled with the fact that the button intents don't work as well leads me to believe the method updateAppWidget(ComponentName, RemoteViews) is what is failing. However, there are no error stacks to help me confirm this.

Here is the code which runs in a separate service called by the AppWidgetProvider's onUpdate method:

What is most frustrating about this bug is that I can't reliably recreate it. Sometimes I get (un)lucky and it shows it ugly head, other times (the majority of the time) it works perfectly. 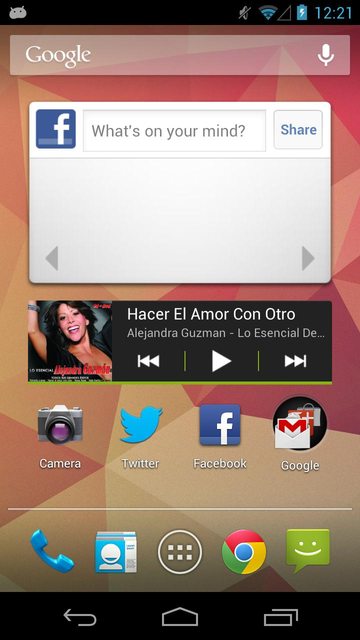 When Facebook's widget looks like this, it has the exact same issues as mine. No data loaded, all buttons are unresponsive.

For both Facebook and my widget, a subsequent update interval will usually make the problem go away.

As much as I appreciate that I'm not the only one who is running into this, I still don't want to release until I fix this. Has anyone here run into this, and better yet found a solution, or even a cause of the problem? Thanks for helping.

EDIT: Something interesting. I ran an experiment where I set the update interval to a full day rather than every 30 minutes. My hypothesis was that maybe the update method wasn't the cause, it was something else which was causing the widget to become blank and unresponsive.

Sure enough, after about 2 hours, I checked my phone and the widget was dead, despite no update method being called. This would lead me to believe that something else is causing this problem, NOT widgetManager.updateAppWidget(widgetCompName, widget); like I previously thought.

After a lot of blood, sweat, and tears I found the solution. I am going to hold off on confirming this answer for a few days to make sure that the error doesn't pop back up, but after a lot of observation I think it is resolved.

So I was right in my edited comments in the original question. It wasn't the update method of the AppWidgetManager that caused the problem, but rather some other Android process which caused the app widget to recreate itself. Unfortunately I couldn't isolate that trigger, but I did find a solution.

In my RemoteViewsFactory class (basically the wrapper which is used to load the data set), I had a block of code that looked like this:

Basically, if the list was empty, I showed a Loading message that took up the entire area where the listview is located. If the list wasn't empty, I'd just hide that message.

So this is what was happening: When the factory was destroyed (presumably for memory purposes) the widget itself was not. So all of the code which sets the intents for the data and stuff was not run. However, the factory was recreated, which ran that block of code which updated the app widget with the new remote views object. This remote views object didn't do any of the methods that you see in my onUpdate() method I originally posted, so all of its features didn't work.

Moral of the story: DON'T use updateAppWidget in your RemoteViewsFactory class! Now it may work if you run all the necessary lines, but I can't confirm that.

Not the answer you're looking for? Browse other questions tagged android android-appwidget or ask your own question.