VS2010 and IE10 Attaching the Script debugger to process iexplore.exe failed

When I attempt to Start Debugging, I receive the following:

"Attaching the Script debugger to process '[1111] iexplore.exe' on machine 'MINE' failed. A debugger is already attached."

I can click OK and look at attached debug sessions - [1111] is grayed out and there is another instance of iexplore.exe with my solution title. I can attach manually and it works fine.

I thought maybe since there were two iexplore.exe pids there would be something wrong, there are not two tabs or windows open and I disabled automatic crash recovery.

There is a simpler fix for the JavaScript debugging issue in IE10:

The IE10 upgrade resets a whole bunch of stuff. I followed 2 steps to fix this.

The combination of these 2 and a browser restart of course fixed it for me.

I also agree, the marked solution above of un-installing is hardly a proper solution.

I have exactly the same problem .. I found a temporary solution but I have to execute each time the same sequence is as follows.

The problem is that every time I have to repeat this procedure every compilation of my project ...

I was having the same problem with VS2010 & IE10 (Win7). After weeks of trying to resolve this issue I finally decided to fire up VS2012 to debug my site. I also updated VS2012 to SP1 and restarted my machine and now VS2010 debugging works fine in IE10.

Someone suggested that running this in an elevated command prompt would do the trick:

I have had this same problem with VS2010 and VS2012 on WIN7 + IE10 CTP back in December last year. I hoped this problem was solved in the RTM version of IE10, today I found out it was not.

I have tried every solution in this post, even installing VS2012 update 2 CTP 4, but nothing fixed the problem.

I decided to revert back to IE9. I didn't use the correct steps which are described in the answer by MonteChristo.

I uninstalled IE10 by doing:

Now this doesn't revert to IE9. Is just removes IE10. Not what I intended. So I installed IE10 again by using the same steps as above.

After that I couldn't help myself to test it one more time and surprisingly it worked I got my Javascript debugging back. What I noticed is the following. Before I uninstalled IE10, the run / browse with (see image below) listed Internet Explorer twice.

After uninstalling, installing IE10 it's listed only once. I don't know if it's related but I wanted to mention it. 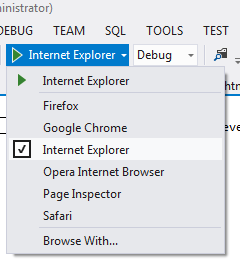 Try to reset your IE settings and then uncheck "Disable Script Debugger (internet Explorer)" under Tools->Internet Options->Advanced and reset your computer.

Even with the newly released IE10 for Win 7, the problem persisted. However, got the hint that installing VS2012 SP1 fixed this issue so I installed Visual Studio 2012 Express via Web Platform Installer (v4.5) -- seems to be fixed!

I tried all of the above (except downgrading to IE9, obviously) to no avail.

I hope it helps someone else too.

I have VS2010 and VS2012 on the PC. It was ASP.NET project and it didn't work for JS debugging. I try both version results was the same. Everything I did was out of success:

Finally, I have installed "Remote Tools for Visual Studio 2012 Update" and "VS2012 Update 4". I'm not sure what is fixed issue but it gone. And VS2010 and VS2012 started debugging JavaScript. Therefore, it seems some components were corrupted. Today, I think, best choice to fix this should be re-install IE, I mean downgrade it and install again, further you can install Update 4 for VS2012.

"In Property Page window check box “Silverlight” must be unchecked"

I had a similar problem (using VS2012 RC) after updating IE9 to IE10 - I fixed it repairing the VS2012 installation - I got there since I had a suspect Internet Explorer duplicate in the debug dropdown list and, even if the debugger was being launched, I could not find the symbols loaded.

In VS2010 for sure there is not that dropdown, but maybe trying to repair could be a fix.

I tried numerous suggestions, but none worked. I finally fixed it by downgrading to IE 9, to wit:

Not the answer you're looking for? Browse other questions tagged visual-studio-2010 visual-studio internet-explorer-10 windows-7-x64 or ask your own question.

19
the script debugger failed to connect to the target process. Adebugger is already attached
11
VS2012 Lost JavaScript Debugger
4
Attaching the Script debugger to process '[XXXX] IEXPLORE.EXE' on machine 'NAME' failed
1
I can debug Javascript in IE10 with VS2010 if I manually attach debugger, can I automate it?
1
Debugging Classic ASP Windows 8/IIS 8 VS2010/VS2012
0
Profiling javascript in visual studio crashes ie
0
Vs2012/vs2010, ie10.. why is the startup of a new debuggin session so slow?

2
Visual Studio Attach to Process - change default automatic code type (Silverlight instead of Script)
11
Process is disabled in VS2010 attach to process dialog
1
I can debug Javascript in IE10 with VS2010 if I manually attach debugger, can I automate it?
1
Disable message if application is running from Visual Web Developer Express 2010 using IE10
3
Visual Studio 2010 cannot debug javascript after uninstalling IE10
1
Can't debug JScript anymore because of an attached debugger (which is not attached!)
1
Failed to Attach to Script process in VS2010
1
Debugging Classic ASP Windows 8/IIS 8 VS2010/VS2012
0
attaching the script debugger to process(5580) iexplorer.exe on machine is failed. a debugger is already attached while running vs2010
19
the script debugger failed to connect to the target process. Adebugger is already attached