I am a Django developer and wanted to know if anyone has any idea of the possibilities of installing and developing on Django using an Android tablet such as the nexus 7. This seems like a reasonably powerful device, can be hooked up with a bluetooth keyboard, and has linux at the core of the OS.

So - is it possible to install Python and Django (or even Flask) on Android?

and its all, open localhost:8000 on your browser, see the picture: 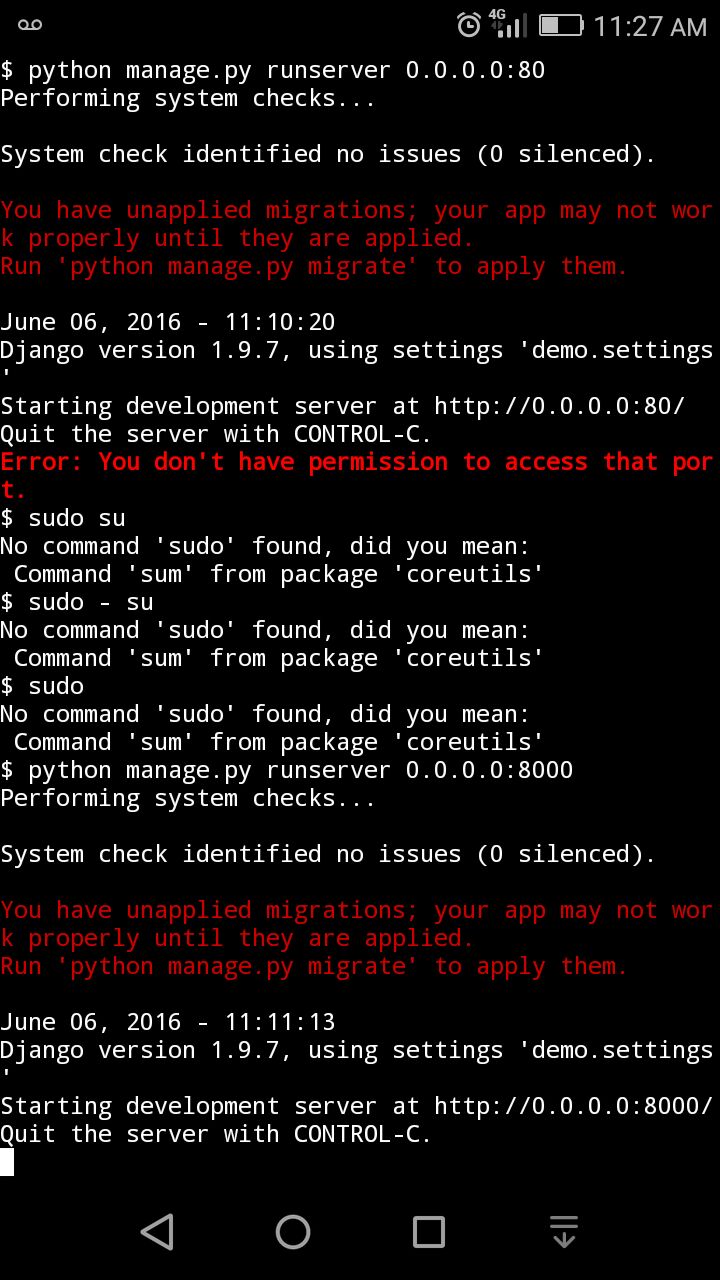 We're developing PythonAnywhere to fill just this kind of niche. We tuned it to work with the iPad first. But it seems that the Nexus 7 is popular enough now that there might be enough demand to do the same thing for Android.

SL4A is a ridiculously excellent library/sdk/app for android and gives you a way to install a number of language/scripting runtimes and a thin veneer for accessing android functionality via the scripting frameworks.

It so happens that Python is an option, and I've used it with cherrypy (python framework) on Android. I haven't tried it with flask or Django but with some work it should be possible.

The app provides a way to download python, install it, and then a way to launch a python console or even just run python scripts.

There was a downside to the python support originally, due to a silly bug/limitation in the Android SDK. This restricted the use of apk assets with _ underscore in the name. The details are faint in my mind, but I am subscribed to the issue in Android so I can follow up with the details about this issue. This would present a problem with many of the python frameworks, as underscores are part of python style.

One good way to accomplish a django development environment on a Nexus7 is to install a linux distro with a package manager alongside Android. Debian Kit hooks into the existing Android directories with symlinks instead of a chroot environment.

With that you can install Debian or Ubuntu and use apt-get and pip to install git, virtualenv, and all the packages and libraries you need to set up your development environment as you would on a desktop. You can write your code in DroidEdit, run the django development server in an Android terminal through ssh to localhost, and test your app right there in the browser on Android.

I could run on my Tablet (android) and smartphone (android) following the procedure below:

QPython suports Django on Android. I am running it on my android device.

p.s: I confess that article's original source is me. But isn't it nice? :)

Well if your end goal is to develop Web applications and host host them on your Android and since you had flask there why not give bottle.py a shot. It's just one file that you copy into your sl4a scripts folder and voila. Bottle is minimalist and near similar to flask. No rooting or Unix environments required.

After save the settings.py and

and its all, open localhost:8000 on your browser

If you are developing an android app and you don't want to use Java, you might want to consider Kivy http://kivy.org/#home

If you are talking about having a web server running on Android and then running your django web app on that web server itself, there's a duplicate answer here - Web Server for Android

Not the answer you're looking for? Browse other questions tagged android python django or ask your own question.

6907
What are metaclasses in Python?
2085
Is there a way to run Python on Android?
7427
Does Python have a ternary conditional operator?
4228
How to close/hide the Android soft keyboard programmatically?
3246
How do I concatenate two lists in Python?
2936
Manually raising (throwing) an exception in Python
3001
Is there a unique Android device ID?
3588
Does Python have a string 'contains' substring method?
3922
Proper use cases for Android UserManager.isUserAGoat()?