Quicksort is not stable, since it exchanges nonadjacent elements.

Please help me understanding this statement.

I know how partitioning works, and what stability is. But I cant figure out what makes the above as the reason for this to be not stable? Then I believe the same can be said for merge sort - though it is quoted to be a stable algorithm.

Consider what happens during the partition for the following array of pairs, where the comparator uses the integer (only). The string is just there so that we have two elements that compare as if equal, but actually are distinguishable.

By definition a sort is stable if, after the sort, the two elements that compare as if equal (the two 4s) appear in the same order afterwards as they did before.

Suppose we choose 3 as the pivot. The two 4 elements will end up after it and the 1 and the 2 before it (there's a bit more to it than that, I've ignored moving the pivot since it's already in the correct position, but you say you understand partitioning).

Quicksorts in general don't give any particular guarantee where after the partition the two 4s will be, and I think most implementations would reverse them. For instance, if we use Hoare's classic partitioning algorithm, the array is partitioned as follows:

which violates the stability of sorting.

Since each partition isn't stable, the overall sort isn't likely to be.

As Steve314 points out in a comment, merge sort is stable provided that when merging, if you encounter equal elements you always output first the one that came from the "lower down" of the two halves that you're merging together. That is, each merge has to look like this, where the "left" is the side that comes from lower down in the original array.

If the <= were < then the merge wouldn't be stable. 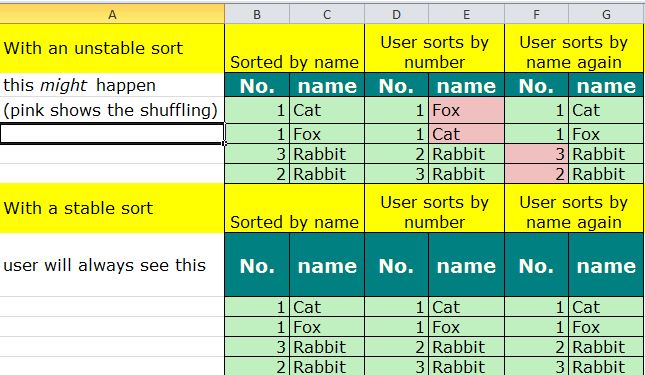 Consider the following array of pairs:

Consider 3 as pivot. During a run of Quick sort, the array undergoes following changes:

Clearly from the above, the relative order is changed. This is why quick sort is said to 'not ensure stability'.

A sort is said to be stable if the order of equivalent items is preserved. The stability of quicksort depends on partitioning strategy. "Quicksort is not stable since it exchanges nonadjacent elements." This statement relies on the prerequisite that Hoare partitioning is used. This is a hoare partioning demo from Berkeley CS61b, Hoare Partitioning

You should know what "it exchanges nonadjacent elements " means.

Not the answer you're looking for? Browse other questions tagged algorithm quicksort or ask your own question.

396
Why is quicksort better than mergesort?
1619
What is the best algorithm for overriding GetHashCode?
64
What Sorting Algorithm Is Used By LINQ "OrderBy"?
717
Generate an integer that is not among four billion given ones
1190
Ukkonen's suffix tree algorithm in plain English
1831
Image Processing: Algorithm Improvement for 'Coca-Cola Can' Recognition
1021
How can I find the time complexity of an algorithm?
2029
What is the optimal algorithm for the game 2048?
1
Quicksort Stability Demo