I'm not completely sure whether this belongs on SO, but I don't know where else to ask.

While I was checking the loading speed of a web app of mine I noticed that apparently no HTTP response (no matter what type - html, css, js) is gzip/deflate compressed. That is, no response header like "Content-Encoding: gzip" is present in any request and the browser reports that the resource is not compressed.

Here's an example of the response headers (note the lack of the content-encoding header): 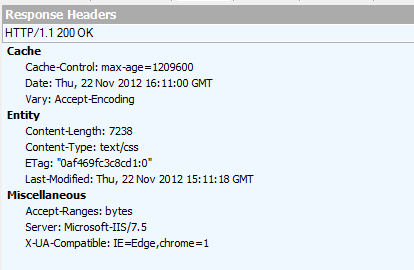 I also checked the server side. The server is running Windows Server 2008 R2/IIS 7.5. I used Failed Request Tracing to find out what the server is sending. The resource appears to be compressed:

Also, the server seems to send the proper headers:

My conclusion: it must be Windows 8 who is intervening here. Apparently it modifies HTTP responses. I suppose that Windows 8 is receiving the compressed response, decompresses it, removes the content-encoding header and passes the modified response further down the pipeline.

Thanks in advance for your answers.

Update: I used Wireshark to see what arrives at the client. As I expected the resources are compressed and the content-encoding header is still present. The image below shows the wireshark protocol and in the bottom right the response as received by Chrome. 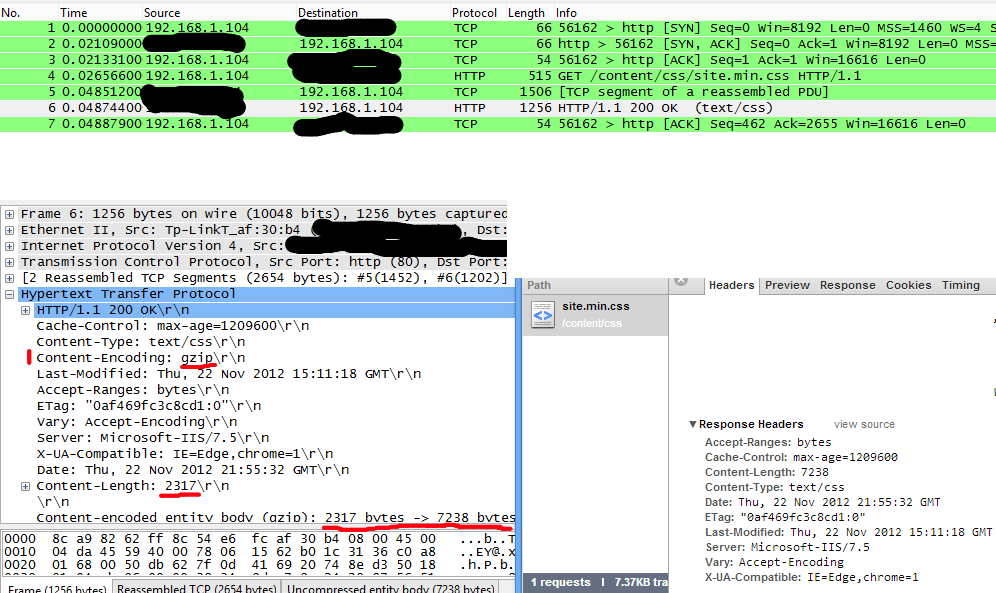 This confirms my assumption that Windows 8 is intervening.

It turned out that the culprit was my antivirus software, Avast, more specifically the integrated real-time network-shield. Turning it off causes responses to appear compressed in the browsers again.

What remains interesting is that Avast was running on the Windows 7 machines as well, even though on those machines responses where compressed where applicable during my tests.

Not the answer you're looking for? Browse other questions tagged http windows-8 http-headers http-compression or ask your own question.

525
How to encode the filename parameter of Content-Disposition header in HTTP?
392
What requests do browsers' “F5” and “Ctrl + F5” refreshes generate?
28
content-length when using http compression
365
How long do browsers cache HTTP 301s?
548
Getting only response header from HTTP POST using curl
28
Appropriate HTTP status code for request specifying invalid Content-Encoding header?
1
Http response with “Content-Encoding: gzip”, but the content is not gzipped
218
What is the “Upgrade-Insecure-Requests” HTTP header?
422
Response to preflight request doesn't pass access control check