Is that the best way to do it?

Rather than add another answer to the one million repeated answers, I am just going to tack on to the top rated answer here that there is another option as of 2022

There's no need to reinvent the wheel, so I'll give you the [MDN version][1]:

Ill add to the above by saying that it also looks syntactically cleaner.


I'm really confused by the answers that have been given - most of them are just outright incorrect. Of course you can have object properties that have undefined, null, or false values. So simply reducing the property check to typeof this[property] or, even worse, x.key will give you completely misleading results.

It depends on what you're looking for. If you want to know if an object physically contains a property (and it is not coming from somewhere up on the prototype chain) then object.hasOwnProperty is the way to go. All modern browsers support it. (It was missing in older versions of Safari - 2.0.1 and older - but those versions of the browser are rarely used any more.)

If what you're looking for is if an object has a property on it that is iterable (when you iterate over the properties of the object, it will appear) then doing: prop in object will give you your desired effect.

Since using hasOwnProperty is probably what you want, and considering that you may want a fallback method, I present to you the following solution:

The above is a working, cross-browser, solution to hasOwnProperty, with one caveat: It is unable to distinguish between cases where an identical property is on the prototype and on the instance - it just assumes that it's coming from the prototype. You could shift it to be more lenient or strict, based upon your situation, but at the very least this should be more helpful.

With Underscore.js or (even better) Lodash:

In particular, Lodash defines _.has as:

Bear in mind that undefined is (unfortunately) not a reserved word in JavaScript if you’re not using strict mode. Therefore, someone (someone else, obviously) could have the grand idea of redefining it, breaking your code.

A more robust method is therefore the following:

On the flip side, this method is much more verbose and also slower. :-/

Armin Ronacher seems to have already beat me to it, but:

A safer, but slower solution, as pointed out by Konrad Rudolph and Armin Ronacher would be:

Considering the following object in Javascript

You can use the in operator to check if the property exists on an object:

You can also loop through all the properties of the object using a for - in loop, and then check for the specific property:

This will return an array of names of all properties that exist on an object.

Reflections provide methods that can be used to interact with Javascript objects. The static Reflect.has() method works like the in operator as a function.

Finally, you can use the typeof operator to directly check the data type of the object property:

Similarly, you can check if a property exists by comparing directly to the undefined Javascript property

Let's cut through some confusion here. First, let's simplify by assuming hasOwnProperty already exists; this is true of the vast majority of current browsers in use.

hasOwnProperty returns true if the attribute name that is passed to it has been added to the object. It is entirely independent of the actual value assigned to it which may be exactly undefined.

The problem is what happens when an object in the prototype chain has an attribute with the value of undefined? hasOwnProperty will be false for it, and so will !== undefined. Yet, for..in will still list it in the enumeration.

The bottom line is there is no cross-browser way (since Internet Explorer doesn't expose __prototype__) to determine that a specific identifier has not been attached to an object or anything in its prototype chain.

If you are searching for a property, then "no". You want:

In general, you should not care whether or not the property comes from the prototype or the object.

However, because you used 'key' in your sample code, it looks like you are treating the object as a hash, in which case your answer would make sense. All of the hashes keys would be properties in the object, and you avoid the extra properties contributed by the prototype.

John Resig's answer was very comprehensive, but I thought it wasn't clear. Especially with when to use "'prop' in obj".

For testing simple objects, use:

If you don't know what object type it is, use:

All other options are slower...

A performance evaluation of 100,000,000 cycles under Node.js to the five options suggested by others here:

The evaluation tells us that unless we specifically want to check the object's prototype chain as well as the object itself, we should not use the common form:

Bottom line, if your Obj is not necessarily a simple object and you wish to avoid checking the object's prototype chain and to ensure x is owned by Obj directly, use if (obj.hasOwnProperty(x))....

Otherwise, when using a simple object and not being worried about the object's prototype chain, using if (typeof(obj[x]) !== 'undefined')... is the safest and fastest way.

If you use a simple object as a hash table and never do anything kinky, I would use if (obj[x])... as I find it much more readable.

Yes it is :) I think you can also do Object.prototype.hasOwnProperty.call(x, 'key') which should also work if x has a property called hasOwnProperty :)

But that tests for own properties. If you want to check if it has an property that may also be inhered you can use typeof x.foo != 'undefined'.

You can also use the ES6 Reflect object:

Documentation on MDN for Reflect.has can be found here.

The static Reflect.has() method works like the in operator as a function.

Do not do this object.hasOwnProperty(key)). It's really bad because these methods may be shadowed by properties on the object in question - consider { hasOwnProperty: false } - or, the object may be a null object (Object.create(null)).

The best way is to do Object.prototype.hasOwnProperty.call(object, key) or:

OK, it looks like I had the right answer unless if you don't want inherited properties:

Here are some other options to include inherited properties:

Another relatively simple way is using Object.keys. This returns an array which means you get all of the features of an array.

Although we are in a world with great browser support. Because this question is so old I thought I'd add this: This is safe to use as of JavaScript v1.8.5.

JavaScript is now evolving and growing as it now has good and even efficient ways to check it.

Here are some easy ways to check if object has a particular property:

hasOwnProperty "can be used to determine whether an object has the specified property as a direct property of that object; unlike the in operator, this method does not check down the object's prototype chain."

So most probably, for what seems by your question, you don't want to use hasOwnProperty, which determines if the property exists as attached directly to the object itself,.

If you want to determine if the property exists in the prototype chain, you may want to use it like:

You can use the following approaches-

The difference between the following approaches are as follows-

I compare only solutions A-F because they give valid result for all cased used in snippet in details section. For all browsers 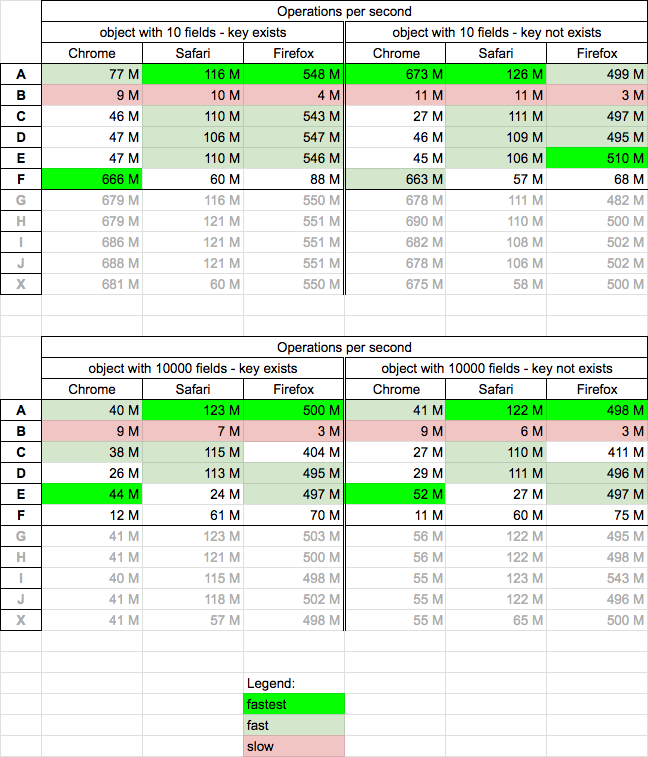 And here are example results for chrome

Given myObject object and “myKey” as key name:

The last was widely used, but (as pointed out in other answers and comments) it could also match on keys deriving from Object prototype.

Here is another option for a specific case. :)

If you want to test for a member on an object and want to know if it has been set to something other than:

then you can use:

some easier and short options depending on the specific use case:

I see very few instances where hasOwn is used properly, especially given its inheritance issues

There is a method, "hasOwnProperty", that exists on an object, but it's not recommended to call this method directly, because it might be sometimes that the object is null or some property exist on the object like: { hasOwnProperty: false }

So a better way would be:

An ECMAScript 6 solution with reflection. Create a wrapper like:

Showing how to use this answer

We can use indexOf as well, I prefer includes

The hasOwnProperty() method returns a boolean indicating whether the object has the specified property as its own property (as opposed to inheriting it).

Don't over-complicate things when you can do:

It Is simple and clear for most cases...

A Better approach for iterating on object's own properties:

If you want to iterate on object's properties without using hasOwnProperty() check, use for(let key of Object.keys(stud)){} method:

full Example and comparison with for-in with hasOwnProperty()

1730
How do I check if an object has a key in JavaScript?
78
for..in and hasOwnProperty
30
How to check whether a Javascript object has a value for a given key?
12
How to check if object has property javascript?
3
Checking whether toString has been assigned
0
Javascript; is this use of "hasOwnProperty" redundant?
0
Check if Javascript boolean is set?
0
How do I check if a string/array/object exists in Javascript?
0
ie javascript for in loop vs chrome for in loop
0
typeof undefined. Which is faster and better?
See more linked questions