What exactly is an Assembly in C# or .NET?

Could you please explain what is an Assembly in C# or .NET?

An assembly is the compiled output of your code, typically a DLL, but your EXE is also an assembly. It's the smallest unit of deployment for any .NET project.

The assembly typically contains .NET code in MSIL (Microsoft Intermediate language) that will be compiled to native code ("JITted" - compiled by the Just-In-Time compiler) the first time it is executed on a given machine. That compiled code will also be stored in the assembly and reused on subsequent calls.

The assembly can also contain resources like icons, bitmaps, string tables and so on. Furthermore, the assembly also contains metadata in the assembly manifest - information like version number, strong name, culture, referenced assemblies and so forth.

In 99% of your cases, one assembly equals a physical file on disk - the case of a multi-file assembly (one assembly, distributed across more than a single file) appears to be a rather odd-ball edge case which I've never encountered so far in my 5+ years of .NET development.

In a multifile assembly there would still be only one assembly manifest in a DLL or EXE and the MSIL code in multiple netmodule files.

In the Microsoft .NET framework, an assembly is a partially compiled code library for use in deployment, versioning and security.

An assembly is a file that is automatically generated by the compiler upon successful compilation of every .NET application. It can be either a Dynamic Link Library or an executable file. It is generated only once for an application and upon each subsequent compilation the assembly gets updated.

The answer is in order for immediate-grasping.

Put simply, it is the compiled project involving your classes and additional files, if there are. That is, each project in a solution is assembly.

An assembly is where a type is stored in the flesystem. Assemblies are a mechanism for deploying code. For example, the System.Data.dll assembly contains types for managing data. To use types in other assemblies, they must be referenced. - Source

How do we know it? If you glance at properties of a project under the solution you can see the following images.

When you compile the project, it turns out to DLL or EXE. 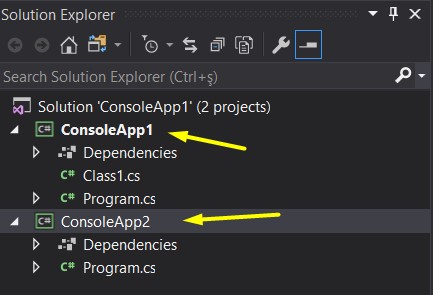 Here's another explanation of the make up of .NET Assemblies, a mini-quote:

The .NET framework consists of the concepts of modules, assemblies, which both store metadata and manifest information. An assembly can contain multiple modules. Visual C# only ever creates one module which is turned into an assembly by the C# compiler (csc.exe), but an assembly can link many .NET modules together via the assembly linker (al.exe) command-line tool. For example each of your source code .cs files could be compiled into a module and linked together to form an assembly - an assembly is just a collection of modules and resources. One of these modules, however; must contain manifest metadata (see below) information for the assembly to be understood by the CLR.
....
Having created a new .exe or .dll inside VS.NET you see your file appear inside your bin folder. Opening it in notepad will give out gibberish, or even inside a hexadecimal editor without knowing the structure of the file, you need a tool like ildasm.exe or CFF explorer to make meaning from it. The structure of the assembly is as follows:

An assembly is a DLL or an EXE which will be created when you publish it or compile your application.

After writing source code of your program(project) then a file is created which may be DLL or EXE depends on your project. It makes only once for a single project. It has two types 1:- single 2:- shared or multiprogram single assembly used only in a single program while shared can be used for multiprogram

Not the answer you're looking for? Browse other questions tagged c# .net assemblies or ask your own question.

0
Are dll files compiled?
0
What does Assembly mean when it comes to classes. Public vs non Public
0
Is assembly in C# similar to the translation unit in C++?
91
Difference between .dll and .exe?
52
Trying to add AutoMapper to Asp.net Core 2?
1
Visual Studio C# Namespaces And Assemblies
1
What is the difference between Oracle mysqld.data.dll and MariaDB mysql.data.dll for c#?

6649
What is the difference between String and string in C#?
667
What is the correct way to create a single-instance WPF application?
1396
What is the difference between const and readonly in C#?
428
Practical uses for the “internal” keyword in C#
2584
What are the correct version numbers for C#?
828
How to enable assembly bind failure logging (Fusion) in .NET
2213
How do I get a consistent byte representation of strings in C# without manually specifying an encoding?
1422
When should I use a struct rather than a class in C#?
1687
Proper use of the IDisposable interface
1438
Why not inherit from List<T>?